Philanthropist, patron of the arts

Magdalena Gyllenkrok was a benefactor and a philanthropist who devoted her life to charity and educational reform. She was one of the best known nineteenth-century women in Lund and was heavily involved in girls’ education and in that town’s poor relief efforts.

Magdalena Gyllenkrok was born at Svartå ironworks, in Kvistbro parish, Örebro county in 1788. She was the daughter of Major and Baron Per Adolf Fock, who was chief marshal at the Swedish royal court, and Christina Charlotta Falker. Lund university library collections contain a short family history which once belonged to Magdalena Gyllenkrok and contains notes and drawings dated to the 1814–1819 period. The main theme of the book is friendship or ”La tendre Amitié”. About a third of the material is written in Swedish, interspersed between a multitude of mottos penned by her friends in French and German.

At the age of 19 Magdalena Gyllenkrok married Baron and chief royal chamberlain Axel Gustaf (Gösta) Gyllenkrok, owner of Svenstorp and Björnstorp castle in Scania, where the couple resided. The couple also had a farm in Lund at Stora Södergatan 25, known as Norbergska gården (the Norberg farm) where they hosted visitors. On the night of 25–26 September 1837 the Swedish king Carl XIV Johan spent the night there.

The couple had four children, of which their son, Carl Gustaf, caused his parents great sorrow and worry. Although he attained the rank of officer he ruined his future by using money from the regimental funds to pay off a gambling debt. This led him to flee into exile and he eventually lost his life in 1840 fighting in one of the Carlist civil wars in Spain. In 1840 his father founded an institutional carehome, based on a German model, to care for “defenceless, lost, and mistreated boys from Scania” at Lilla Råby, just outside of Lund. Perhaps he did this as a kind of penance for his son’s misbehaviour.

Throughout the nineteenth century the provision of formal education for girls suffered neglect and was only patchy in comparison to that offered to boys. Margareta Gyllenkrok was deeply struck by the unfairness of this situation. A Lund businessman named Anders Gadde set up a will in 1823 ensuring that his money would be used to found: “A School for poor Legitimate Children of the Female Sex”. His intention was that some ten girls aged around nine and hailing from Lund and Simrishamn – his place of birth – would be taught “the usual women’s past-times” at the school after having first completing scriptural studies and learning to write legibly at the poor school.

Gadde’s donation was, however, quickly used elsewhere by the town authorities and following his death in 1826 nothing had been done about setting up the school. A group of Lund’s wealthier and socially-aware ladies nevertheless took matters into their own hands setting up a voluntary organisation in 1836 called Fruntimmersdirektionen för Fattigskolan (ladies’ board for the Poor school). Magdalena Gyllenkrok chaired this organisation from 1836–1862.

The organisation’s aim was to undertake non-profit charitable work and to establish a handicrafts school for girls. Fruntimmersdirektionen immediately gained access to rent-free premises within the newly-built poor school at Magle Stora Kyrkogata. The girls’ education they offered was partly funded by Gadde’s will. They mercifully received a small initial payment of 100 riksdaler from the Gadde fund, primarily spent on educating, or at least not in funding girls’ domestic chores as Gadde had originally intended. From time to time balls were organised and sales held to raise funds for the handicrafting school known as Gaddiska flickskolan or Slöjdskolan för flickor.

The Gyllenkroks were a warm-hearted couple with humanitarian interests. During Magdalena Gyllenkrok’s period as chair of Fruntimmersdirektionen the couple made large financial donations to the town’s schools. In 1857 Baron Gyllenkrok and his wife set up an 8,000 riksdaler fund for those who ran Lund’s poor relief. The interest accrued by the fund was to be shared annually between Gaddiska nya slöjdskolan, the infant school, and the poor school which all operated side by side. 4,000 riksdaler was donated to the aforenamed schools in 1861 of which the accrued interest was to be used for prizes in the form of books to be awarded to the cleverest pupils, as well as clothes required for church confirmation.

A small school for girls opened in Lund in 1838. This was the town’s first such school to be staffed with academically trained teachers. The instigators of the school were Masters Gustaf Magnus Sommelius, later principal of Lund Cathedral school, Fredrik Borg, and Petter Wåhlin. Baroness Gyllenkrok and the wife of Bishop Faxe served as the school’s benefactors. At the two women’s request a handicrafts instructor, named Helene Darin, was employed and paid one Swedish riksdaler a month for each pupil she instructed in all sorts of hand work. It remains a myster as to what happened to that school and where its premises lay.

Magdalena Gyllenkrok died in 1862 at the age of 74. Her death announcement read: “Mourned by many needy children”. Her well-attended funeral at Lund Cathedral numbered around 800 mourners who came to honour her memory. 12 girls dressed in black from the town’s girls’ school marched behind the coffin along with pupils from the Råby institute. Bishop Johan Henrik Thomander officiated at the funeral and gave a beautiful speech: “she did everything that she could”. He wrote an obituary which is retained within the archives at Riksarkivet. After the burial Lund studentsångarförening (student singers association) and the Cathedral school choir sang and on the departure of the funeral cortège pupils from the Råby institute played a death march on brass instruments.

In memory of Magdalena Gyllenkrok her husband Axel Gustaf Gyllenkrok established a fund for girls in 1863, called ‘Malin Gyllenkroks Vårdanstalt för fattiga och värnlösa flickor’ which was situated at a farm in Lilla Råby. After being destroyed by fire in 1869 a new building was constructed close to the original institution. This building still exists and is known as Oxiegården, although the care home was closed down in 1925. In 1858 land was donated to Lund town for what is now Gyllenkroks allé.

The Gyllenkrok couple are buried together in the family grave at Igelösa cemetery. 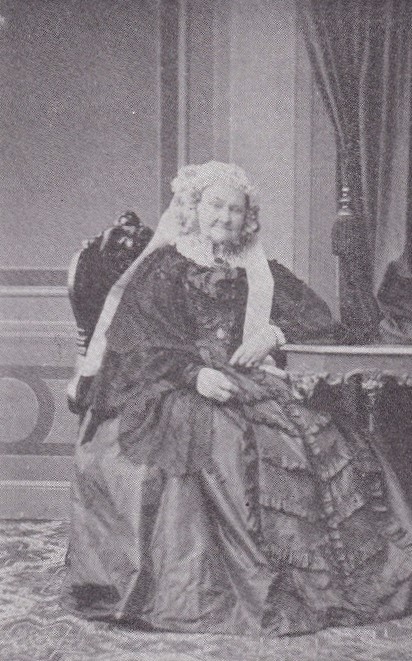