Journalist, producer of radio and television

Maj Ödman was a journalist and radio and TV producer. She was the head of the Home and Family section and Radiohjälpen. She was known particularly for her radio and TV programme with blind and thalidomide-damaged children.

Maj Ödman was born in 1915 in Sollefteå, the second child of four. Her mother was Anna Ödman née Engströmer and her father was Per Ödman, a county forestry official. Maj Ödman completed her elementary schooling in Sollefteå before she left home in 1933 to teach at a Montessori school for thirteen years in Gothenburg. In 1947, she was attracted by a post at the Swedish School in Paris. Like many others, she longed to visit Europe after the second world war. After three years, she returned to Sweden, in 1950. That same year, she married her cousin Tor Axel Ödman who was divorced and had three children.

Maj Ödman came to the radio at the beginning of the 1950s. That was before the occupation of journalist had been professionalised through a specially tailored professional education. The recruitment of people to work at the radio was based on other merits. In Paris, Maj Ödman had taken on assignments as a translator apart from her teaching job. One of her clients was Hjalmar Gullberg whom she helped with translations from the French during his time as the head of radio theatre. Gullberg travelled to Paris to select works from the French theatre repertoire with Maj Ödman who later translated the plays.

Hjalmar Gullberg was one of those Maj Ödman thanked for getting started at the radio. Another was Olof Forsén who employed her in his programme work during her time in Gothenburg where he was for a time the director at the radio. Thanks to their recommendations, the door was opened to the desirable radio job. She had just returned home from Paris in 1950 when she was invited to take a month-long temporary job at the radio. That month was the start of more than forty years in the service of the radio. Maj Ödman was recruited like most women colleagues to the House and Home section, where she was among other things the head in 1956–1963, when the section had changed its name to the Home and Family section. The words “accessible, inspiring and humorous”, were used to describe her as a section head. Other epithets that have been used are decisive and tenacious.

Housewives’ programmes had had their heyday during and immediately after the war. The women’s expansion that occurred after the war opened up the media to women colleagues. The so-called women’s programmes started being phased out in favour of programmes that dealt with the family in general. Maj Ödman’s interest was first and foremost children, and she did pioneer work with her respectful and natural conversations with children. Apart from her famous conversations in 1958–1962 with the blind twins Bengt and Rolf at the Tomteboda institute for the blind, she had a series in 1957–1961 in which she followed the development of the boy Mats for many years. A programme series on TV with the deaf and blind girl Malla, who told viewers about her childhood, caused a commotion, not just because it was marvellous how Malla communicated by using hand signs but also because Maj Ödman used the more intimate form of address of “du” to Malla. Perhaps these programmes were not only milestones in a new conversational climate on the radio and TV, but also in ordinary life. With her social pathos, Maj Ödman fought tirelessly against prejudice, and brought new issues up on the agenda. “Communication is the key word” she said. With her programmes, she wanted to inform and give listeners the tools for building their own understanding of an issue. “Think for yourself” was her motto.

The programme series on thalidomide children, Peter och hans kamrater, broadcast in 1967, was born on the initiative of the parents’ association created to support the children who were soon to start school. Among the parents, there was an anxiety that the children with their deformities would meet problems among their new schoolmates. Maj Ödman thought that was an important matter and considered that it ought to be an assignment for TV. In the choice of children, she was captured by the little boy Peter’s charm. He lacked both arms and legs and in the first sequence, he moves about by rolling on the carpet. The complaints section was overwhelmed by calls saying things like “we don’t want to see this stuff, we mustn’t be forced to see it, stop it immediately!” Maj Ödman did not hesitate to respond to the protests: “If I was uncertain before about whether or not I would dare to broadcast this, I was then completely convinced that it must be broadcast, it was utterly essential for it to be broadcast”. Affirmative comments came from media companies, among them ones in France and Germany that stated that Swedish TV had made a brave choice, and they themselves would never have dared to broadcast such a programme.

Another category of programme that bore Maj Ödman’s signum was a series that built on broadly designed public surveys, a kind of sociological investigation, in which Maj Ödman carried out interviews and experts on the subject at hand contributed analyses. Several of those series became books. Many were produced within the framework of Radiohjälpen, which Maj Ödman took over after Bo Willners in 1965. Her social interest was focused on children’s problems in other countries. For Radiohjälpen, she made informative programmes on starvation in Ethiopia, the reading campaign in Cuba, the tuberculosis-afflicted Korea, India’s programme for birth control and others. “Children and fear” was another extensive project in 1969, that built on children’s drawings and stories, first in Sweden but later also in other countries, and which simultaneously functioned as a cultural portrait of the countries visited. These programmes also resulted in a book in 1979: Barn i fem länder tecknar och tänker. Maj Ödman resigned her engagement in Radiohjälpen in 1973 in protest against the idea that the money collected should also finance the programmes and personnel instead of going entirely to the aid targeted.

In 1974, Maj Ödman started work in the scientific editorial office, with responsibility for the subject fields of psychology, pedagogy and sociology. Some of the titles give an idea of the breadth of subjects: Född för tidigt, Alzheimers sjukdom, Musikterapi and Kvinna fjättrad av tvångsneuros. She was also the coordinator of the Sveriges Radio’s medical committee that otherwise consisted of experts in various medical disciplines. After her retirement, she continued as a freelancer and took great pains to do research into a hereditary illness by which she herself had been afflicted since childhood, and that she saw as the source of her engagement for children with functional disturbances. When Maj Ödman was 90 years old, she was diagnosed at last with Multiple Epiphyseal Dysplasia (MED).

In the 1980s, the child perspective in Maj Ödman’s production was replaced by focus on the elderly. For almost two decades after her retirement, Maj Ödman participated in among others the programme Senioren in which she continued with her questionnaires with titles like ”Being a pensioner”, “Crime and punishment” on experiences of corporal punishment, and “Technology in my life” in 1989, all of which built on the contributions of the radio audience. In the series Så annorlunda, listeners were asked to write about how everyday life had changed during their lives. These programmes also resulted in a book in 1993: När elströmmen kom till byn. Maj Ödman ended her radio career with the programme Sommar in 1997, in which, among other things, she took a final contact with Peter, the thalidomide child. He died the same year.

Apart from her programme work, Maj Ödman was a member of various associations. Like so many of her journalist colleagues, she was active in the Yrkeskvinnors klubb. Among others may be named the Internationella Kvinnoförbundet för Fred och Frihet (IKFF) and the Sällskapet Medicinjournalisterna (SSM). She also was engaged in the controversial issue of euthanasia. Maj Ödman was twice made an honorary doctor. For her medical programmes, she was honoured by the Karolinska Institutet in 1985, and for her social programmes, she receive an honorary doctorate at the Samhällsvetenskapliga fakulteten in Stockholm in 1992. She was also rewarded with the Vasaorden.

Maj Ödman was widowed in 1998 and died in 2009, at 94 years of age. She lies buried in Galärvarvskyrkogården in Stockholm. 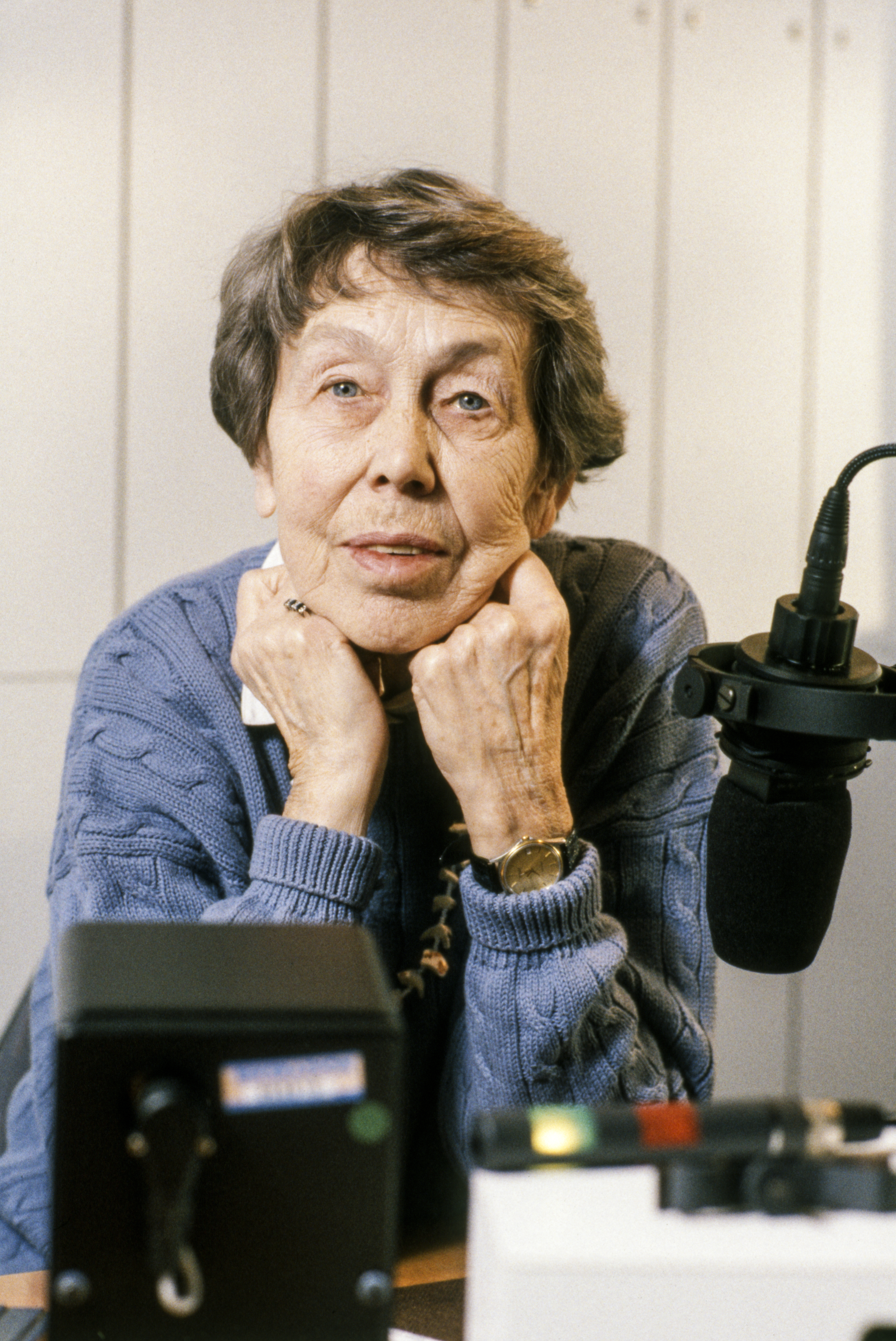