Maja Carlquist was a certified gymnastics instructor and the founder of Sofiaflickorna (the Sofia girls) gymnastics group. She played a very significant role in the development of physical education at Swedish schools.

Maja Carlquist was born in Mariestad in 1884. Her interest in gymnastics began at an early age. She had to fight in order to become trained as a gymnastics instructor at Stockholms Gymnastiska centralinstitut (central institute of gymnastics), GCI, as her father did not feel this position was suitable for a woman. Meanwhile, she attended Fackskolan (vocational school) in Uppsala to study home economics, even though her desire to become a certified gymnastics instructor remained strong. Maja Carlquist had the support of a female relative in Stockholm when she applied to GCI and she was accepted in 1907. Two years later she graduated as a certified gymnastics instructor. She subsequently served some short internships at a school in Berlin and at a Kalmar girls’ school. In 1910 Maja Carlquist was employed as a gymnastics teacher for Stockholm’s elementary schools and was placed at Sofia school where she remained until 1958. In 1911 she married the civil engineer Anders Carlquist, and they went on to have four children together.

At the Gothenburg fair in 1923 Maja Carlquist and a small group of girls from Sofia school performed a gymnastics display. She was then chosen by Svenska Gymnastikförbundet (the Swedish gymnastics federation) to participate in the 1936 Olympic Games in Berlin, along with 20 girls from the fourth and fifth years at the school. Working from this basis she established Sofiaflickorna, a travelling display team which promoted Swedish school gymnastics both within and outside Sweden. Amongst other things, they performed on “Sweden Day” at the 1939 World’s Fair in New York, followed by a three-week tour of America. They went on to perform several exhibition tours around the world. However, the Sofia girls did not engage in competitive gymnastics under Maja Carlquist’s direction. She was opposed to competitions as she saw them as detrimental to the group and favouring the individual above the team.

Although the Sofia girls became a cause célebre both at home and abroad, Maja Carlquist still faced years of opposition from parts of the Swedish gymnastics establishment who felt that she had diverged too far from the form of gymnastics which had dominated in the Swedish educational system for many years, namely Ling gymnastics. Maja Carlquist always denied that she opposed Ling gymnastics, and instead insisted that she wanted to reform it along what she called “the principles of rhythm”. In contrast to the unnecessary straining in Ling gymnastics she developed a form of gymnastics that was marked by the least tension required. Her ideas evolved from Elin Falk’s belief in the importance of rhythmical movement – in order to conserve energy. According to Maja Carlquist this could be achieved by alternating strength-training with rest, so that movement happened with the least exertion possible, and, as she put it, flowed throughout the whole body. In this way the greatest possible effect could be achieved with the least possible effort. Rhythm here did not involve music; gymnastics were to be done without music as the rhythm of the movement was to come from within. According to Maja Carlquist Elin Falk had put rhythm to some of the more natural movements of Ling gymnastics, such as walking and running, but not to the constructed exercises which made up the most of its repertoire. The latter was Maja Carlquist’s task.

In the book Sofiaflickornas gymnastik. Lings gymnastik utformad efter rytmens prinicip, from 1942, Maja Carlquist sets out her view of how gymnastics should be performed. Amongst other things she describes a constructed exercise that she developed, muscle-stretching, which came to be focal both in teaching and displays. It was important to Maja Carlquist that the students trained their muscle-awareness. Muscle-awareness led to an understanding of how various parts of the body related to each other and thus which force, speed and direction should be applied to a movement as well as how long it should be held. Muscle-awareness, which can be trained, not only aids energy conservation but also the free nature and beauty of movement, which goes some way to explain the attention the Sofia girls received from journalists, gymnasts, teachers and the general public.

Following Maja Carlquist’s death in 1968 the Sofia girls were not disbanded but instead continued their activities. Even though music has now been added to their displays and they now compete, the various gymnastics programmes performed still include many of the movements which Carlquist created.

Maja Carlquist is buried at The Woodland Cemetery in Stockholm. 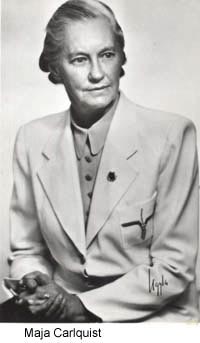