Malla Silfverstolpe established what became known as possibly the most famous Swedish literary salon of the Romanticist era. She was also a writer herself and wrote one of the first autobiographical works which, in the Romanticist spirit, focused on the development of the ego.

Malla Silfverstolpe was orphaned at an early age. Her mother, Charlotte Rudbeck, died shortly after giving birth to her and her father, the Finno-Swedish military hero Robert Montgomery, who had been a favourite of King Gustav III, became exiled to the Swedish colony of Saint-Barthélemy for having been part of the Anjala conspiracy. Montgomery was pardoned after the king’s death in 1792 and he returned to Sweden, but his attention lay on the new family he had established before his exile. Malla Silfverstolpe came into the care of her maternal grandmother, Baroness Magdalena Rudbeck, in Uppsala. Magdalena Rudbeck was a strong woman who single-handedly managed her property at Edsberg and was the guardian of her younger sister Gustava Rudbeck, as well as Malla Silfverstolpe’s half-sister Gustava Arnell. Malla Silfverstolpe described in her memoirs how Edsberg was a matriarchy where “actual male dominance was completely unknown”.

Malla Silfverstolpe received the homeschooling typical for an aristocratic girl of the time, provided by various governesses, a tutor and a priest. Her education comprised languages, mathematics, history and geography, along with catechism and the Bible. One unusual aspect of her education was that she additionally learned English and not just French, which was the dominant language of the era. Later she also learned German through her friends. As a society girl she was also expected to learn music, drawing and dancing, but she showed no talent for these despite her great interest in music in particular. However, she was a talented actress who, in her youth, would perform plays at Edsberg that she and her friends had written. Her formal education finished after her confirmation and from then on she focused on her own studies, mainly the reading literature, which was her great passion. Her autobiography reveals what she read as she made detailed notes and comments on the material. She was most influenced by Goethe, Rousseau, Madame de Staël, Byron, Atterbom, Geijer and Fredrika Bremer.

In 1807, when she was 25 years old, Malla Silfverstolpe was under pressure to get married from her maternal grandmother. She thus got married to the officer David Gudmund Silfverstolpe, despite grave doubts given that she had a lot of suitors. It was not a happy marriage. Their temperaments and their interests were too disparate and David Silfverstolpe came increasingly to suffer from deep depressions, which made him very difficult to live with. The fact that their marriage remained childless also pushed the couple apart.

David Silfverstolpe died in 1819 and as a widow Malla Silfverstolpe could set up a literary salon in Uppsala in 1820, with meetings which she referred to as “Fridays”. At this point she was a 38-year-old affluent aristocrat who was considerably culturally and socially endowed and her home became the central meeting point for Uppsala’s Romanticist authors. The focal core of the circle was Erik Gustaf Geijer and his wife Anna Lisa and P D A Atterbom and his wife Ebba, as well as professor of Eastern languages Gustaf Knös, his wife Alida Knös and their daughter Thekla Knös, who later became an author in her own right and the hostess of a salon along with her mother. A looser group of male writers, musicians, academics, students and various women – usually relatives of the men – but also female authors like Fredrika Bremer and Sophie von Knorring also gathered around these three families and Malla Silfverstolpe. Her salon ran until the 1850s, but its most fruitful period was from the 1820s to the 1830s.

The main focus of the salon was literature and unpublished work would be read aloud and discussed. Atterbom presented Lycksalighetens ö whilst C J L Almqvist gained great success with Törnrosens bok in the 1830s. When he subsequently published Det går an in 1839 he became too radical for the group. Malla Silfverstolpe also entered into the critical debate generated by Almqvist’s novel by releasing the short novel Månne det går an?, 1840. She questioned Almqvist’s idea of open unions between men and women and claimed, as did many others, that such relationships were immoral and would lead to the exploitation of women.

Music also had a place in the salon. Geijer would often play and sing, as did the student and Bellman-singer Per Ulrik Kernell and the up-and-coming composer Adolf Fredrik Lindblad. Kernell and Lindblad were both important to Malla Silfverstolpe and she developed close relationships with them. Kernell’s untimely death from tuberculosis inspired her to write her own autobiography whilst her relationship with Lindblad became a lifelong friendship which was significant to both of them. Lindblad became one of the most notable Swedish composers of the nineteenth century and Malla Silfverstolpe helped him by being his patron. She organised a stipend for him in order to study in Germany and France and arranged a trip to Germany, which she and Geijer also went on. Lindblad gained access to the salons of Berlin through Malla Silfverstolpe and his songs were performed there. They were later released in translation by Malla Silfverstolpe’s friend, the author Amalia von Helvig.

Malla Silfverstolpe’s own creativity grew within the salon society. She penned the first version of her autobiography between 1822 and 1836, and then reworked it during the 1840s with Fredrika Bremer’s help. Bremer was exceedingly favourable, but felt that the text should be more focused on Malla’s personal development. Although this did become the clear focal point of the account, the influence of earlier biographies is still apparent. Malla Silfverstolpe herself called her text “Minnen” (memories) and the first published version was entitled Memoarer, both terms which refer to broader, less egocentric works. For example, the text begins with a long family history and Malla Silfverstolpe sometimes referred to her work as “family memoirs”.

Malla Silfverstolpe’s Memoarer was not published during her lifetime, presumably because it contained sensitive material. Between the years of 1908-1911 it was edited in preparation for a first edition by her namesake, Malla Grandinsson, who was Adolf Fredrik Lindblad’s daughter.

Malla Silfverstolpe died in Uppsala in 1861 and is buried at the old Uppsala cemetery. 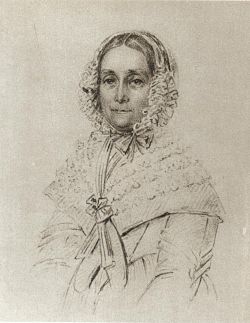