Margareta Nordström was a government agency director and a liberal politician who was very active in socio-political matters.

Margareta Nordström was born in Norrköping in 1907. She was the daughter of Hilma Karolina Hultman and Karl Henriksson Nordström. She matriculated at the girls’ school Linköpings gymnasium för flickor in 1927. She lost her parents within the space of a few years not long afterwards and so she became her younger brother’s legal guardian.

A few years after graduating from school Margareta Nordström began working for the Östgöta Correspondenten newspaper in Linköping, where she remained on the staff for almost a decade. She then took a job as an assistant at Värmland county employment office in Karlstad, followed by a stint as assistant at Örebro county employment agency. She left that post in 1943 following the Swedish Parliament’s decision to instigate government benefits in the form of home-care services (now called “hemtjänst”). At this time Socialstyrelsen (national board of health and welfare) became the government-appointed regulatory authority for this service and Margareta Nordström was appointed as home-care services consultant within the new department.

Margareta Nordström was made head of the home-care services agency which itself was part of Socialstyrelsen’s second agency, dealing with poor relief and childcare matters. The home-care services section expanded under Margareta Nordström’s leadership. Initially priority lay in supporting families with children but soon the services grew to include single individuals and the elderly. The home-care services complemented what was already on offer in homes for the elderly and expanded rapidly. This led to a massive surge in the need for qualified personnel. Margareta Nordström pushed Socialstyrelsen to set up training courses for the existing staff. She was convinced of the utter importance of qualification requirements, not just to safeguard the professional status of the employees but also because the work undertaken entailed special skills.

Margareta Nordström’s activities even took her beyond Sweden’s borders. In 1940 she had already undertaken a study trip to Great Britain where she developed ideas for home-care services to be an extension of care for the elderly. She also visited Austria to help that nation set up social services on the Swedish model. By engaging with other countries Margareta Nordström was able to disseminat information on the causes that mattered most to her whilst also creating important contact networks. Talks began to set up an international cooperative organ which was finally realised in 1959. The International Council of Homehelp Services (ICHS) had representatives from Germany, Belgium, the Netherlands, France, the USA, the UK, and Sweden.

Margareta Nordström’s job meant that on a daily basis she was exposed to vulnerable individuals and this gave her a broad insight into the economic and social injustices of the time. In 1960 she was elected into the Swedish Parliament, as a representative of Folkpartiet (now known as Liberalerna, the liberal people’s party) and she kept these vulnerable people in mind as a parliamentarian. The following year she was elected onto the second standing committee on law which entailed an extra responsibility for socio-political matters. During her time as a parliamentarian she continued her efforts on behalf of home-care services. Her party-political engagement also led her to hold several local positions within various agencies and internally within her party. These included serving as chair of the women’s Folkpartiets kvinnoförbund (FPK, now Liberala kvinnor) from 1964–1967. Margareta Nordström had broad interests in culture and art and often visited museums in Sweden and abroad. Her cultural interests also catalysed her efforts to increase accessibility within society. This included proposals for handrails and lifts in order to make public buildings more accessible.

Margareta Nordström’s double roles as a politician and a home-care services consultant facilitated her transition from political visions to pragmatic reality. Her friend, Seth Bremberg, who was chief editor of the satirical magazine, Grönköpings Veckoblad, used her as inspiration for his character Ada A:son Susegård. She was portrayed as an enterprising, multifaceted woman who made herself heard both through the spoken word and in writing.

Following her retirement Margareta Nordström continued her various activities and continued to give talks. The year before her death she was interviewed by the weekly magazine Allers. By this time she was dismayed at how poorly managed the home-care services which she had been involved in setting up were actually proving to be. The staff were not adequately qualified and bureaucratic obstacles prevented them from performing their jobs properly.

In 1986, after Margareta Nordström had died, several articles were written in tribute to her highlighting her major efforts on behalf of social matters. Her colleagues at Socialstyrelsen described her as a “socially motivated innovator”.

Margareta Nordström died in Enskede in 1986. 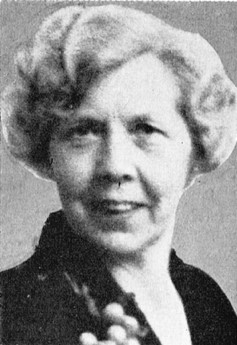