Margit Friberg wrote ten historical novels and was the first author to write about the Baltic island of Öland’s development and its inhabitants’ lives, in the form of a novel.

Margit Friberg was born at Gåsesten, at that time a lively fishing port on southern Öland where she grew up in a seaman’s family. Her father was the skipper of a small cargo ship and her paternal grandfather had been a deep sea sailor. A few months before Margit was to have her sixth birthday, her mother died. She was looked after for a couple of years by her paternal grandparents before her father remarried. After six years at school and her confirmation, she moved at the age of 15 to live with an aunt in Stockholm, where she attended evening school to learn shorthand and typing. After completing her education, she worked for eleven years as a clerk at the daily newspaper Bergslagsposten in Lindesberg. At the newspaper office she met Gunnar Friberg. They married in 1932 and moved to Västervik where her husband worked as the chief editor on the daily Västerviks-Tidningen until his retirement. After the marriage, Margit Friberg was a housewife. They had one daughter in 1939. When her husband retired in 1968, they moved to Mörbylånga on Öland.

It was when Margit Friberg was at home expecting her child that she saw an advertisement in the magazine Folket i Bild about a competition for a serial. Margit Friberg, who had begun to write her family history in her free moments, now began to write her debut book Mitt liv är en våg. It won third prize and was published by Folket i Bild publishers in 1942. She was then 38 years of age.

Margit Friberg was genuinely interested in history, mainly Öland’s history. She read a good deal and collected material that she sorted out under various headings, among others fishing, farming, traditions and food. During her annual visits to Öland, she travelled round and interviewed older people. She came to be very knowledgeable and it was this knowledge about Öland’s nature and historical circumstances that she wanted to communicate in her books. For her it was very important that all the facts in the books were correct while the story itself was a product of her imagination. The reader was to be given a picture of “how it might have happened”.

After her debut in 1942, it only took two years until the next book appeared: Rosenkind, that built on an old Öland myth from the 1300s. During the following years, she published some short stories in among others Folket i Bild. It was first in 1959 that she completed her next book, Vandrar-Marí, that turned out to be her most liked and read book. It was also published in 1976 in a second edition in LT:s publishers’ (Lantbruksförbundets Tidskriftsförlag) series Goda berättare.

The book is about a young girl, Maria, who every summer wanders from the north to the south of Öland with her little horse, Dampen, selling goods. Through Maria’s eyes, what was happening on Öland in the summer of 1801 is depicted. This was the year that the whole island ceased to be a royal park in which it was forbidden for the islanders to hunt, own a rifle and chop down forest. Their need was great while the deer trampled the farmers’ fields and the wild boar ravaged the forests. For this story, Margit Friberg picked material out of her great larder of knowledge about Öland and its inhabitants: the poor people in freezing hovels, wealthy farmers, the few who were literate in the vicarages.

After Vandrar-Marí, Margit Friberg began to establish herself in earnest as a writer. She had more time to devote herself to writing and became a member of the Swedish authors’ association: Sveriges Författareförening (nowadays Sveriges Författarförbund, SFF). She also joined the authors’ association in Småland. She was however a reserved person and does not seem to have participated actively in anything.

In 1961 came her fourth book, Klockargården published by LT:s förlag. The book was about the development of farming on Öland.

By the time Klockargården lay on the bookshop shelves, Margit Friberg was already busy with her next book. A legend about a clergyman’s wife on southern Öland had set off her imagination and the result was the novel Den tid mörkret står: efter en gammal sägen in 1966. It is a very dark story that differs from her other tales about ordinary people. According to her, it took four years to write and was the book she valued the most.

While Margit Friberg was busy writing her sixth book, Nu seglar Adonia in 1969, she was awarded the Södra Kalmar county cultural bursary of 4,000 kronor. Nu seglar Adonia is a tribute to the crews on small cargo boats at the time of the first world war. The book was published in 1970; and the same year, she was awarded the Landsbygdens authorship prize by the Boklotteriet (nowadays the study organisation Studieförbundet Vuxenskolan’s authorship prize). At the age of 66, Margit Friberg was at the height of her career as an author.

Five years later, her seventh book, Skog har öron, mark har ögon came out. It was a book about Carl von Linnaeus’s journey round Öland in 1741, told from the point of view of the inhabitants of Öland. The descriptions of their poverty and miserable living conditions were realistic as always in Margit Friberg’s stories. They are allowed to speak for themselves at the same time as her indignation over how the people of Öland had been treated is a main theme running through the book. It was her last book at LT:s förlag that was beginning to have economic problems and was only investing in safe future sales. Her next book, Ett hem på jorden was published in 1980 by Bokförlaget Settern, which would also publish all her coming books. Ett hem på jorden is a story about one year in the family life of the skipper of a small cargo boat in a harbour that is very reminiscent of Gåsesten.

In June 1986, Hertiginna med Guds nåde was published, and received great attention from the press. Margit Friberg had now left the coastal towns of southern Öland and instead moved on to describe events at Borgholm Castle in the 1300s. The same year she was elected as the Öland Inhabitant of the Year for her depictions of “Historical and socially varied settings on Öland”. The prize was presented to her at Solliden, the royal family’s summer residence on Öland, by King Carl Gustaf. Crown Princess Victoria presented her with flowers.

As she grew older, Margit Friberg suffered from various ailments. She had been widowed in 1980, and had moved into a pensioners’ flat in Mörbylånga. She took with her the piles of material for future books. In 1990 she published Söder på Öland, a collection of stories and fragments from Öland’s history that she had begun to plan twenty years previously.

Her next book, På Kalmar slott satt Anna Bielke (about the leader of the defense Anna Eriksdotter) followed very soon after, in 1991. Margit Friberg had started on this book much earlier, in 1961—1962. What turned out to be her last book, Speglingar, did not arouse the same interest in the press when it appeared in 1993. Speglingar is a sequel to Söder på Öland with fragments of Öland’s history.

Margit Friberg’s books were reviewed in the national and local press and always had a kindly reception. However, she never became known beyond the shores of Öland but was pigeon-holed as a provincial author. Reviewers praised her for her fine descriptions of nature and people. And her greatest joy was never to be caught out with incorrect facts.

Tiny and fragile in appearance, but with an inner fervour for history and a strong lust for storytelling, she worked up to the last. When she died on 17 April 1997, at 93 years of age, the draft of three chapters of her next book lay there, completed. 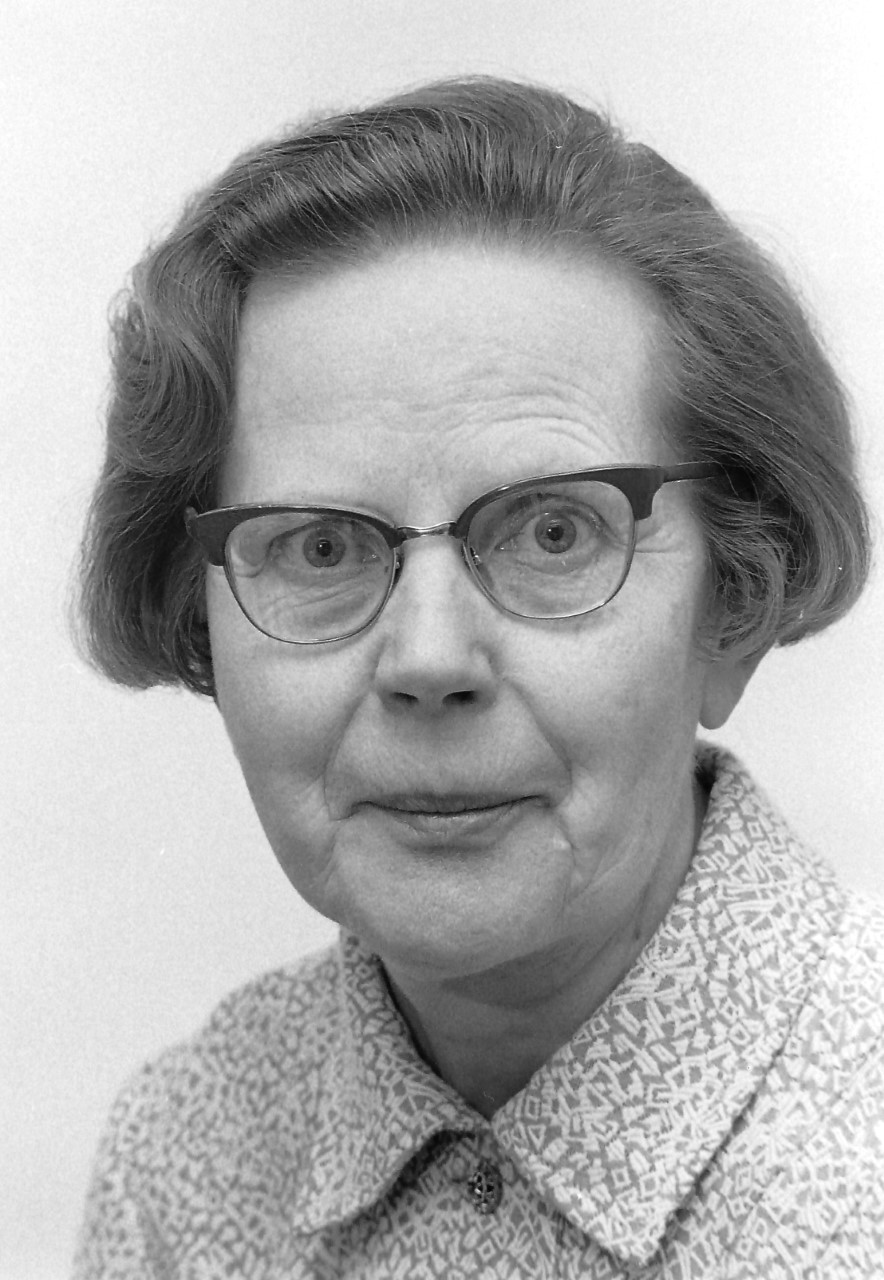