Mari Simmulson was a sculptor, a ceramist, and a painter. She is best known for her exotic figures in black clay.

Mari Simmulson was born in St Petersburg, Russia, in 1911. Her parents were of Estonian heritage. After the Russian Revolution the family fled back to Tallinn in 1919, and Mari Simmulson spent the rest of her childhood in the Estonian capital. Having graduated from school in 1930 she spent the years of 1931–1935 training as an artist at the state-run traditional arts school in Tallinn. Her studies there included ceramics, which was her preferred medium of expression. In 1937 she received a stipend for an internship at Arabia in Helsinki which she used in that company’s artistic department. There she met the Swedish artist Tyra Lundgren who later proved to be a valuable acquaintance.

Mari Simmulson continued her sculpting studies during the period of 1938–1939 at the Akademie der Bildenden Künste in Munich, under the instruction of Professor Karl Killer, who was also a sculptor. Following the outbreak of the Second World War she continued her studies as a student at the advanced school of arts, crafts, and design in Tallinn, from 1941–1942. She then returned to Munich for the 1942–1943 period in order to complete her sculpting studies, and finally returned home to Tallinn again.

Mari Simmulson came to Sweden as a refugee on an open fishing-boat in the autumn of 1944. She sought out Tyra Lundgren who had continued to run a studio at the Gustavsberg porcelain factory throughout the war years. Lundgren ensured that Mari Simmulson met Wilhelm Kåge, who was the factory’s artistic director, and he then employed her at the company’s Värmdö site. Mari Simmulson began to work as an artist at the Gustavsberg Studio after New Year in 1945. She was given a free hand to create stoneware sculptures. One of her creations was a portrait-like bust of Wilhelm Kåge which can today (2017) be seen at the Gustavsberg porcelain museum. Several of her figures were later put into production, including a series of small animal figures with a speckled-green glazing. In 1948 she made her artistic debut with an exhibition at the Gustavsberg shop in Stockholm. The critics praised her powerful feminine figures and animals with their rich, varied glazings.

Mari Simmulson had met the man who became her husband, fellow Estonian Paul Saretok, at a refugee camp in Roslagen. He eventually began to study at Uppsala university. She then sought employment at Upsala-Ekeby AB in Uppsala where she gained a job in 1949. As a designer at the factory she was given free rein to produce items in clay.

In 1952 she exhibited her collection of earthenware and sculptures at Nordiska Kompaniet (NK) in Stockholm, again to very positive reviews. Mari Simmulson was at that time considered to be one of the best ceramists at Upsala-Ekeby. During the 23 years she spent working for that factory she mainly produced free-standing figures, along with vases, bowls, serving dishes and other useful items, both as parts of series and as unique items.

Mari Simmulson introduced a method of painting using cobalt nitrate and other nitrates on raw material. Despite being a highly poisonous technique it did, however, produce fine painted ceramics. Her painted pieces were based on imagery rooted in Baltic and Russian folk art. She often painted young, beautiful women, with almond-shaped eyes, in a manner resembling the fairy-tale tradition. She also produced more exotic themes. She designed vases and bowls with carved decorations and bearing titles such as Senegal and Nigeria. She similarly produced African and Asian female figures which were sold in great numbers. Upsala-Ekeby’s famous black clay was well-suited for the production of these exotic figures where the loin cloths and saris were painted using clear glazing colours which very effectively served as a contrast to the dark clay. Her slender figure called Balinesiskan is one of her best-known pieces. The sculpture is half a metre tall and only 100 numbered copies of it were made.

Mari Simmulson also undertook several refurbishments of public spaces. The Upplandsbanken branches in Enköping and Västerås both display large wall decorations by her. She also decorated a wall in the Karlskrona sparbank using ceramic plates which can today (2017) be seen at the Karlskrona Porslinsmuseum. Her official pieces include a powerful feminine figure – a strong and contented lady – which was sculpted for the Neurocentrum reception area at the Akademiska hospital in Uppsala.

Mari Simmulson was one of the artists who fell victim to the structural transformations experienced by Swedish industrial art in the early 1970s. Cutbacks at Upsala-Ekeby in 1971 led to her being made redundant due to lack of demand. She continued working for a few more years as a designer for Deco in Helsingborg.

Mari Simmulson died in 2000. She lies at a memorial garden in the Gamla cemetery in Uppsala. 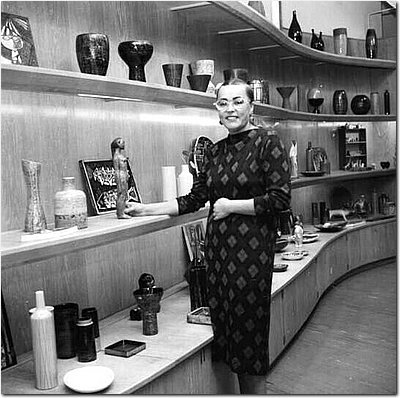