Maria Aspman made seminal contributions to the world of pedagogy in the beginning of the twentieth century. She belonged to the pedagogical reform group which included Anna Sandström and Edvard Palmgren.

Maria Aspman was born in Stockholm in 1865. Her parents were Bernhard and Charlotta Aspman. She also had a sister named Sigrid. Bernhard Aspman managed a garden centre which probably lay in the area of Stockholm now known as Vasastaden. It seems that the Aspmans aspired for their daughters to gain a thorough education. The girls began their schooling at the Widell girls’ school, a private junior school in Stockholm near Normalmstorg, not too far from where the Aspmans were living at the time. The girls then attended Statens normalskola (a public school), which was associated with the Högre lärarinneseminarie (advanced teacher training programme) in Stockholm. Both Maria Aspman and her sister subsequently enrolled in the teacher training programme, where Maria Aspman specialised in the natural sciences. She completed her training in 1886 and in the autumn of that year she began working at Klara folkskola in Stockholm, where she remained until 1920. Maria Aspman took non-graduate courses at Stockholm College (later University) to further her knowledge in the natural sciences biology, chemistry, physics and mathematics. She created a cupboard known as the “Aspman cupboard” for use in teaching demonstrations. The cupboard contained examples of various types of solutions, minerals, and mounted animals amongst other things, and cupboards like these were used as part of teaching in elementary school. The concept even won a prize at the 1904 World’s Fair in St. Louis, USA.

On behalf of the Stockholm folkskoledirektion (elementary school authority) Maria Aspman and Kerstin Hesselgren made enquiries into career training for girls. This led to the establishment of Stockholm’s “högre folkskola för kvinnlig utbildning” (advanced elementary school for female education). Maria Aspman served as the principal of that school from 1920 to 1929. She was also the principal of the Fredrika Bremer Association’s adult colleges from 1917 to 1939.

Maria Aspman devoted her spare time to various societies. The first association she joined was Svenska dräktreformföreningen (underwear reform association of Sweden), which sought to replace corsets and stays. Through this association she met the person who became her life companion, namely Karolina Widerström, who was the first officially qualified female doctor in Sweden. The couple lived together for 25 years. Maria Aspman was also an active member of the Fredrika Bremer Association. She and Karolina Widerström were both very involved in Landsföreningen för kvinnans politiska rösträtt (LKPR, National Association for Women’s Suffrage).

Maria Aspman and Karolina Widerström spent many summers training teachers in the natural sciences. They both believed that hygiene needed to become a required subject within the study of nature. In order to improve her knowledge of medical hygiene Maria Aspman took a course in bacteriology at the Karolinska Institut (Caroline institute) in 1910. With her newly-gained expertise Maria Aspman was able to teach health education, a subject which Karolina Widerström had introduced into the girls’ school curriculum in Stockholm at the turn of the twentieth century. It was not long before health education also became a required subject within elementary schools.

Maria Aspman died of breast cancer in 1944. She is buried at Norra begravningsplatsen (the Northern Cemetery) in Solna. She bequeathed a significant portion of her financial assets to a trust which is managed by the Fredrika Bremer Association. The income generated by the trust goes to women trained in the textile arts. 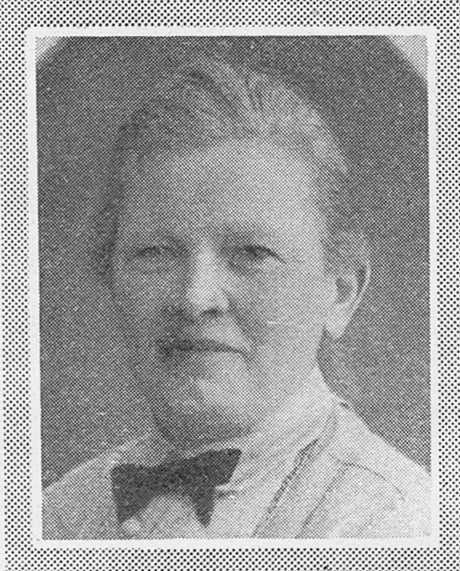