Maria Charlotta Erikson was a popular and successful actress during the romantic era. She was an important role model and teacher for the next generation of Swedish stage artists, like for example Emilie Högqvist and Jenny Lind.

Maria Charlotta Erikson was born in 1794. Her mother was Christina Halling, who was in service in the household of French-born Pierre Joseph Lambert, the orchestra leader at the Kungliga Teatern (now the Opera) in Stockholm. The girl was born out of wedlock, and Joseph Lambert, the son in the household, was most probably the father. When her mother married Emanuel Erikson, a chamber servant and later manufacturer of cotton wool in 1797, he adopted Maria Charlotta Erikson, who took his surname. She kept it all her life, except for the years she was married in 1812–1821. In 1805, she started at the theatre school at Kungliga Dramatiska Teatern (nowadays Dramaten) and had lodgings at the home of Sofia Lovisa Gråå, a teacher there.

In 1812 she was given a contract as an actress at Kungliga Dramatiska Teatern. Maria Charlotta Erikson drew certain attention in 1812 for a supporting role in Granberg’s historical drama Svante Sture och Märtha Lejonhufvud in which she was praised for “pure and clear diction” and in 1814 she was praised as Sally in Hartford och Sally by Zschokke.

Maria Charlotta Erikson was considered most suited to speaking roles despite the fact that she had received a musical education, but she often sang in plays and even had less demanding opera roles like for example Papagena in Mozart’s Die Zauberflöte in 1824. That year, she married Johan Fredric Wikström, the choirmaster, singer, actor and teacher at Kungliga Teatern’s theatre school, and fifteen years her senior. In July the same year, their son Johan August was born. During the following four years, three more children were born.

In 1817, the Wikström couple separated and in 1821 their divorce went through. Maria Charlotta Erikson was probably the driving force in the process since she had fallen in love with the popular violinist, singer, composer and orchestra leader Edouard de Puy, who was a powerful figure at the theatre. Their relationship has been described as stormy but also like a marriage. When he died suddenly in 1822, Maria Charlotta Erikson was deeply shocked and in her grief she withdrew from the theatre for the rest of the year. Later in the 1820s, Maria Charlotta Erikson lived as a courtesan and in both 1829 and 1831 she bore two sons when she was on leave.

In about 1820, a new generation of actors dominated the ensemble to which Maria Charlotta Erikson belonged, with Nils Wilhelm Almlöf, Olof Ulrik Torsslow and Sara Torsslow. These actors all became important colleagues for Maria Charlotta Erikson, and for example her teamwork with Sara Torsslow was considered excellent despite the actresses’ different charisma and styles of acting. They dominated Dramaten’s female ensemble until 1834.

At that time, drama was often characterised by sentimentality. Maria Charlotta Erikson most often played romantic young women, young wives full of zest and tender mothers. As such, many of her roles became very popular with the audiences, for example the title role in Thérèse: ou L’orpheline de Genève by Ducange in 1820 and Beata in Lindeberg’s Blanka in 1822. In 1824, she had several such audience successes with the title roles in Valérie by Scribe, in Weber-Wolff’s Preciosa, the gipsy girl who turned out to have noble blood in her veins and in the end marries her Spanish nobleman. She was also successful in more dramatic plays, for example as Ophelia in Shakespeare’s Hamlet in 1824. Other successes were her Thekla in Wallenstein in 1831 and Luise in Love and Intrigue in 1833, both by Schiller.

Maria Charlotta Erikson had good language skills and considerable general knowledge, and she developed her intellect by keeping herself updated in international drama and also by study trips abroad. As early as 1824, she had translated a play from the French, and had it performed: La Jeune Prude ou Les fammes entre elles by Emmanuel Dupaty. This one-act play was performed twenty-five times during the season, which at that time was an audience success. Even more successful was Felsheims husar, a vaudeville comedy that she translated in 1832 and Bernhard von Beskow wrote couplets for. It contained trouser roles for both Maria Charlotta Erikson and Sarah Torsslow, which were considered very daring, and their popularity held strong even in future generations so they were performed forty-five times until 1854.

At the end of the 1820s, the theatre started to run at a loss which led the management in 1828 to try to implement a new contract that would change the actors’ conditions considerably. The management chose to pension certain actors prematurely, among them Maria Charlotta Erikson, who was then forty years old. During her farewell performance, the audience gave her its support with strong applause. She performed her success role Preciosa, as well as Väktaren by Eugène Scribe that she herself had translated from the French.

In the spring of 1834, she performed for the first time as a guest actress outside the capital, in Gothenburg. She had already performed there during the summer, but then her visit was interrupted by the cholera that was paralysing the country and forcing the theatres to stay closed. During the summer of 1835, she was employed by Djurgårdsteatern in Stockholm, where she participated in the much spoken-of performance of Scribe’s Strozzi och Martino among other works.

At Dramaten, the younger actors had had difficulty in filling the roles after the old ensemble and the press propagated for their re-employment. Maria Charlotta Erikson was thus re-employed in 1836, but with a lower salary than previously. This was to be her true prime. The popular Emilie Högqvist had taken over Maria Charlotta Erikson’s old roles, and she now in her turn had to take over some of Sarah Torsslow’s roles as older women, so-called mère noble, for example Queen Elizabeth in Mary Stuart by Schiller in 1836. At the original premiere in 1821, Maria Charlotta Erikson had played the title role.

Maria Charlotta Erikson and Emilie Högqvist often performed together as from 1836. The older colleague was most probably a role model for the younger woman and influenced her role interpretations. It is also possible to divine a cooperation between the two of them. At their respective recette performances, they often introduced new plays with good roles for them both and that sometimes allowed them to perform other types of role than those they usually did. They were innovators who modernised the repertoire, resulting in many audience successes. The most well-known of these innovations was Scribe’s The Glass of Water in 1841 in which Emilie Högqvist played Queen Anna and Maria Charlotta Erikson excelled as the scheming duchess of Marlborough. This play came to be one of the recurrent audience successes for Dramaten for generations.

Maria Charlotta Erikson performed tragedy and popular comedy equally successfully but it was in the new French salon comedy that she was considered most brilliant. Her diction was outstanding and her lines were distinguished by temperament, wit and smart irony. Her acting style was seen by her contemporaries as elegant and unusually natural. There were also those in whose opinion she performed with only superficial feeling. During her career, Maria Charlotta Erikson played 230 roles in 214 plays.

In 1837, she started giving tuition to the women students at the theatre, both the singers and the speaking role pupils, and this she continued until 1842. The internationally famous opera singer Jenny Lind certified that Maria Charlotta Erikson had influenced her development. Several of Maria Charlotta Erikson’s pupils were to be important for Swedish theatre, for example Zelma Hedin, Aurora Strandberg and Edvard Swartz. Swartz started at the theatre school at the age of 13 and was considered too young to attend the same class as the older male pupils so he had to study with the women.

During the last years of the 1830s and the first two of the 1840s, Maria Charlotta Erikson was artistically at her peak, but in 1842 she chose for some unknown reason to leave Dramaten anyway. The press had let the rumour slip out that she considered herself opposed by the management, and she did have the reputation of being both scheming and thirsty for power.

Maria Charlotta Erikson set off on a longer journey to France. She returned to Sweden in 1843 when she accepted engagements with various travelling companies in the provinces, like Berggren’s, Wallin’s and Gilles’. These tours certainly depended on economic factors since her pension had been revoked, but they also gave her a new, larger audience. Since she was the first actress with truly high status who recurrently toured the provinces, she came to be important as a quality-raising element in the touring theatre companies in Sweden.

In 1846, she travelled once more out into Europe, where she spent two years. On her return to Sweden, she was engaged by the Mindre teatern in Stockholm, where in 1847 for example she had great success performing the title role in Markisinnan de Vilette by Charlotte Birch-Pfeiffer. During the 1849–1850 season, she performed with Sara Torsslow at Mindre teatern in Markisinnan de Vilette and Vänskap i döden, in which their interplay once again received great praise. On a few occasions, she also performed at Dramaten, the last time being in 1855, when the audience showed that she was still very popular.

Maria Charlotta Erikson died in 1862 in Düsseldorf, where her youngest son was studying art. 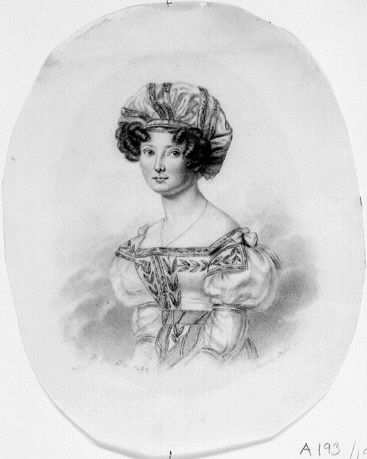