Queen of Sweden, princess of Brandenburg

Maria Eleonora of Brandenburg was queen of Sweden. She was in conflict with the governing Riksrådet and had her daughter taken out of her care. She was libelled in earlier historical records.

Maria Eleonora of Brandenburg is one of the most libelled queens in the historical records. She has been depicted as a difficult wife, a “cross for her household”, and in every way the opposite of her husband, the Swedish hero king. She has been portrayed as a bad mother who took such bad care of her daughter and her daughter’s upbringing that Riksrådet was finally compelled to remove her daughter Kristina from her care. Her grief over the death of Gustav II Adolf has been depicted as hysterical and exaggerated. This negative image of the queen stems from the power struggle with Riksrådet in which she was involved after the king’s death. Later research, situating the queen in her historical context, has however created a more nuanced picture of her.

Maria Eleonora was born in 1599 in Königsberg (now Kaliningrad), the daughter of Elector of Brandenburg Johan Sigismund and his wife Anna of Prussia. Her mother had a strong position as heiress to several areas of land and as a person she was both strong-willed and energetic. In her manner and her actions, Maria Eleonora’s mother reminded everyone very much of Kristina of Holstein-Gottorp. It was also Anna of Prussia who had the last word about her daughter’s marriage.

Maria Eleonora and her sisters were attractive on the royal European marriage market. From the Swedish side, marriage plans were being formed as from 1615. The marriage was to give the Swedish king allies among the protestant rulers at the same time as it strengthened the position of Protestantism in Germany. Her father was positive to the marriage alliance while her mother was initially negative. From Brandenburg, the wish was to maintain good relations with neighbouring Poland where Sigismund Vasa reigned. Maria Eleonora had at the same time several other suitors, among them the future kings Vladislav IV of Poland and Charles I of England.

When the Swedish king was finally able to introduce himself and mutual liking arose between the spouses-to-be, the widowed princess completed the negotiations with the Swedish chancellor Axel Oxenstierna. Maria Eleonora’s sisters also participated so that the plan would be able to be carried out since their brother, who had taken over as the elector, would rather have chosen somebody else for his sister. In the autumn of 1620, Maria Eleonora was able to travel to Sweden to marry the Swedish king. Her contemporaries were enchanted by the new queen’s beauty, charisma and royal dignity. “I cannot sufficiently thank God that my gracious king has such a virtuous, well-brought-up and well-formed person” remarked Axel Oxenstierna.

During their marriage, Gustav II Adolf was often out on campaigns which worried the queen. Life out on the battlefield was dangerous even for a king, especially one who personally led his troops. Maria Eleonora became frustrated when attempts were made to prevent her from travelling out to her husband. Her contemporaries took note of her love for him. She often became ill and depressed during his absences, to recover when he returned home. People around her described her among other things as “sensitive” and that she found it difficult to “keep a balance”. Another reason that Maria Eleonora insisted on being near the king was most probably also the demand for her to secure the royal succession by having a son, and preferably several in reserve. That was the foundation for her legitimacy as a queen. Her pregnancies were also difficult, and she miscarried. Her children were either dead at birth or died at an early age. The only one to survive to adulthood was her daughter Kristina.

If the relationship between Maria Eleonora and Riksrådet had been strained during Gustav II Adolf’s life, it became inflamed after his death. The conflict concerned among other things the role she was to play in the government before Kristina came of age, and her education and marriage, and Maria Eleonora’s economic rights as the widowed queen. Maria Eleonora, who herself came from a family in which female relatives had both power and influence even as regents, which was relatively common at that time, tried to safeguard her traditional assignment as widowed queen. She thus demanded a place in Kristina’s regency government, and pointed to her mother-in-law Kristina of Holstein-Gottorp’s example. However, she was told among other things that what she had heard was “far too wildly recounted”. Maria Eleonora’s position in the negotiations was weakened by the fact that Gustav II Adolf, in contrast to Karl IX, had not made any written promises concerning her role after his death. According to Riksrådet, the king had rather exhorted them not to let the queen have anything to do with government.

A conflict also arose in connection with Kristina’s future marriage. Maria Eleonora’s point of departure was that she as mother must be allowed to decide her daughter’s marriage. She both started new marriage negotiations with Denmark and continued those that her husband had started with Brandenburg, and in due course she also made efforts to marry her daughter to her cousin Karl, later Karl X Gustav. The regents considered that Maria Eleonora had overstepped her authority and generally acted too independently in her contacts with foreign royal houses.

Maria Eleonora became more and more limited in her position as widowed queen. She had ambitions to create a more magnificent court culture around the Swedish royal throne according to the continental pattern. Maria Eleonora was interested in theatre, architecture, art, and music and gave support to musicians, artists, actors and dance troupes. Gustav II Adolf had also been keen to appear with Maria Eleonora at his side and she played her role as a symbol for the peace and welfare that was to follow upon the wars in which the kingdom was involved. Even as a widowed queen, she made an impression on visitors who described her as amiable, beautiful, majestic and well informed concerning art and architecture.

Maria Eleonora’s ambitions to create royal brilliance were however greater than her assets. She was generous and gave large sums to the poor and needy, which was also a traditional task for a queen. Riksrådet was however of the opinion that the widowed queen was mismanaging her economy and trying to make a good name for herself at their expense. They threatened to put her income under compulsory administration while Maria Eleonora asserted that her allowance did not match her status and duties as the widowed queen.

Even her authority as respected and beloved wife with the assignment of cherishing her husband’s memory was challenged by Riksrådet who asserted that the king had actually complained over his unhappy marriage. Her grief over the king’s death was described as exaggerated. The story of how she grieved excessively in her black-clad apartments, and how she refused for as long as she could to have him buried has also become well known in the annals of history. Her actions upon the death of the king should however be seen against the background that it was customary at the time for the widowed queen to manifest her grief by having her rooms clad in black. That was a tradition that Maria Eleonora brought with her from her youth, and it was also what other widowed Swedish queens had done. That she delayed until 1634 to have him buried may also be seen as an attempt to ensure that the king would be given a funeral in accordance with his status. In royal and aristocratic circles, funerals – as important social markers – often claimed a great deal of time and resources. The conflict about the king’s grave and his remains continued to inflame the relationship between the widowed queen and Riksrådet. When she also lost the custody of her daughter in 1636, the break between them was total. Riksrådet motivated its decision by asserting that Maria Eleonora neglected Kristina and her upbringing, and that she had a bad influence on her daughter and taught her to think ill of Sweden and all things Swedish, and that her court was too German-inspired. When Maria Eleonora lost the custody of her daughter, she lost at the same time her foremost assignment in the monarchy.

It was instead Kristina’s paternal aunt, Katarina of Pfalz, who was entrusted with the task of bringing up the young queen. At the same time, Maria Eleonora planned on leaving Sweden. In the summer of 1640, she travelled abroad and stayed in among other places Denmark and Brandenburg. Riksrådet condemned the widowed queen’s behaviour and asserted that she had disgraced the king’s memory through her flight. They had her name struck from the intercessions in the churches. When Kristina acceded to the throne as the reigning queen, she began to make efforts for her mother’s return, which Maria Eleonora also did after eight years abroad, in 1648.

Kristina’s and Maria Eleonora’s relationship was complicated, but it was not altogether bad, as it has often been depicted. In her autobiography, Kristina is careful to distance herself from her mother and the typically feminine characteristics she represented. Her description, that has contributed to colouring later generations’ understanding of Maria Eleonora, can also be seen against the background of Kristina’s needing to legitimise herself as a monarch by emphasising her links and similarities to her idealised father. Simultaneously, Kristina was careful to honour her mother when she returned to Sweden, and according to the same source, they got on well together. Maria Eleonora received a generous allowance and she resided mainly at Nyköpingshus, but Kristina also gave her the city palace Makalös as her residence in Stockholm.

Maria Eleonora suffered the great grief of experiencing her daughter Kristina’s abdication in June 1654. The same autumn, she participated in the welcoming of a new queen, Hedvig Eleonora, at Stockholm Castle, before she herself died a few months later in March 1655. She lies buried in Riddarholmskyrkan in Stockholm, beside her husband. 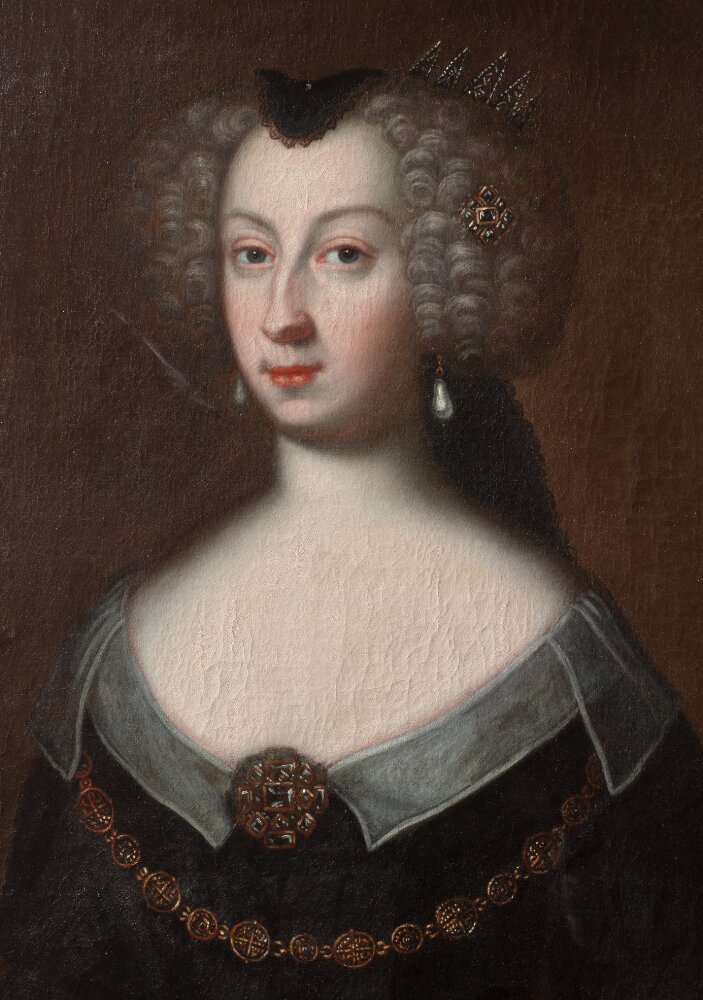