Maria Jansson, known as Kisa-Mor, is the most well-known Swedish female doctor of the nineteenth century.

Maria Jansson was born in 1788 and grew up in Kvarntorp in Närke. Her mother died of typhus when Maria Jansson was six years old. Her father was known as Läke-Jan. He apparently belonged to a family of healers and was called upon by sheep farmers and other itinerants for various physical complaints. However, he was not keen for his daughter to follow in his footsteps as a healer although he could see that she had a proclivity for it.

Despite her father Maria Jansson learned to heal in secret and became increasingly called upon by people in need. Her father’s increasing alcoholism probably also played a part in these developments. At the age of 19 she married the farmer Anders Olsson and moved onto his farm, Lilla Älberg. It was an unhappy marriage from the outset but “Åkare-Maja”, as Maria Jansson then became known, would travel around to those who were ill and earned a reputation as a skilled female healer. She gave birth to two daughters, Brita Stina in 1809 and Stina Kajsa in 1811, but both died before turning a year old.

In 1812 Maria Jansson was brought to the castle prison in Örebro charged with poisoning the farmer Anders Andersson. However, her patients testified in her favour and she was released on condition that she no longer practise her healing arts.

When her sister, Kerstin Jansdotter, was buried in 1813, Maria Jansson’s brother Lars gave her a letter addressed to their father Läke-Jan. The letter had been written by a patron named Catarina Hellwegh, of Åby manor in Östergötland, who was requesting help for her brother Nils Wibjörnsson, who was suffering from cancer. Läke-Jan was already dead at the time but Maria Jansson replied to the letter saying that she believed she could cure the patient. She arrived at Horn in 1813 or 1814. Using her so-called ‘”fire drops” she managed to heal the cancerous wound. This secured her future as a healer. She remained in Horn and continued to practise her healing under the protection of the upper class families of the numerous surrounding manor houses. At Åby she fell in with the Hellwegh sisters, Eleonora and Fredrica, and moved with them to Flytthem, which belonged to Åby. She established an herb garden there - “lycke, lycka” in Östgöta dialect, which led to her becoming known as “Madam Lycka”. These early years at Flytthem would be the happiest of her life which she later referred to as her flowering period.

A never-ending stream of patients from all over Sweden came to seek out Maria Jansson. She had an office at Kisa Gästgivaregård and set up an apothecary there, which is how she came to be called Kisa-Mor. She prescribed diets, infusions, mixtures, porridges, elixirs and delivered hope to those who were seriously ill. She became particularly well-known for her treatments of wounds and her infusions to treat gout. She also delivered treatment by correspondence without ever meeting the patients concerned. Some of these letters have been preserved, including her recipes for treatments. Being at a safe distance from her husband she sued him for divorce at the regional court in Hardemo in 1815. After six suits the divorce was finally awarded in 1819. Finally, Maria Jansson was a free, self-sufficient woman.

In 1817 Jeanette Ståhl from Stockholm visited Maria Jansson because she had a lump on her neck. She spent a while living at Flytthem, where she was cured and became a good friend of Maria Jansson and the Hellwegh sisters. Jeanette Ståhl and Maria Jansson then began a lengthy correspondence and these letters have survived. At some point during the transition from winter to spring in 1818 Maria Jansson made a visit to Stockholm and Jeanette introduced her to the social circles of the capital city. In the mid-1820s Maria Jansson made a second visit to her friend who had got married in the meantime and was now known as Jeanette Wahlbom. There were rumours that Maria Jansson was called into the palace to treat the Crown Prince Oscar who was unwell at that time.

Maria Jansson’s patient numbers increased with every year that passed and in order to maintain her own strength she began to drink warm beer and to administer her own cholera drops with aquavit. Her moods became increasingly irregular, to the extent that her domestic situation at Flytthem became untenable. She was invited to move to Katrineberg near the church in Horn, which she did in 1829. The entire neighbourhood there soon became completely dependent on “Mrs Horn”. She put the inmates of the poorhouse to work, and made loans to people keeping careful accounts of debts in a small book, which after a few years contained the names of 127 debtors. In order to deal with all her visitors an inn was opened near her house where she could receive patients while Katrineberg became a hospice where patients were housed in the guest rooms. Maria Jansson would cook food and medical supplies in the same kitchen. She had four maids in her employ. However, the number of unwell people coming to see her continued to increase. She became increasingly unbalanced as her stress levels rose and this led to violent outbursts. She lost many of her former friends. In September 1839 she was summoned before the court because she, while intoxicated, had attacked the sexton Oppfeldt, after he had allowed his cows to graze too close to Katrineberg, and because she had attacked a poorhouse inmate.

In October 1839 Betty Ehrenborg-Posse, arrived at Katrineberg in order to be treated for a lump on her cheek. She kept a diary during her approximately two-month long stay at Katrineberg. Her portrayal of Maria Jansson is rather that of an almost demonic old lady than of an insightful female healer. Betty Ehrenborg-Posse read extracts of her diary aloud at Malla Silverstolpe’s literary salon in Uppsala just eight months after Kisa-Mor died.

Maria Jansson died of a seizure on 27 February 1842. She is buried at the Horn cemetery in Östergötland. She left behind a sizable fortune which went to her brother in its entirety due to the lack of a will. 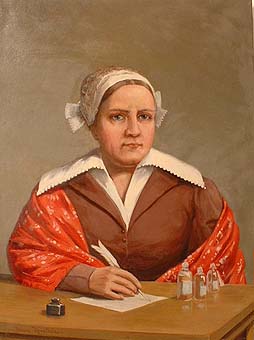