Maria Lundbäck was active as a photographer in Uddevalla for almost half a century. She was also engaged in the struggle for women’s suffrage.

Maria Lundbäck was born in Örebro but moved from there with her mother Maria Theresia Uddgren to Uddevalla, where her mother had lived in her youth. Her father also came from Uddevalla. Maria Lundbäck was employed by the photographer Josefina Rydholm who taught her to be a professional photographer. They were related, and when Josefina Rydholm died in 1880, Maria Lundbäck took over the atelier. She was then 23 years of age. Three years later, Maria Lundbäck started her own firm at Lagerbergsgatan 11 where she also lived. The property came to be synonymous with Lundbäck’s enterprise and the building is often portrayed on the back of her photos, with two women standing on the balcony.

During Maria Lundbäck’s years as a photographer, the technology of photography developed, which also affected the expressiveness of the photographs. Portraits show more relaxed people, which may have been an effect of shorter exposure times but also the fact that photographs became more and more common and also cheaper. Much of the material from Maria Lundbäck preserved today consists of postcards that have had her photos as originals. The cards show views from Uddevalla and its surroundings. The outdoor views often show beautiful natural surroundings in and around the town, not seldom snowclad. Taking photographs out in the cold was not technically possible before the end of the 1870s. The frequent flooding along the Bäve river in Uddevalla was also documented by Maria Lundbäck, often with dramatic elements in the motive, like people running through cascades of water. Maria Lundbäck seems also to have been hired by various traders to take photos that were then used in commercial contexts. Some photos of people at work have also been preserved. The reasons why these were taken are not known.

Maria Lundbäck was politically engaged as a member of the local association for women’s suffrage. She was elected to the municipal council in 1912. She seems however not to have accepted that post. Together with her partner Hildur Andersson, a businesswoman, Maria Lundbäck sold her Uddevalla motives as postcards. Hildur Andersson owned a paper mill and a stationery shop in Uddevalla. Hildur Andersson was also a member of the suffrage association and they both belonged to an artists’ group working for the rights of women to artistic education and occupations. The group consisted partly of individuals who needed a sanctuary, among other things for their homosexuality, forbidden by law until 1944. Ture Malmgren, a journalist and the founder of the newspaper Bohuslänningen, was the group’s patron. Many of the women in Uddevalla who were active in these associations, among them Hildur Andersson, had attended Eva Rodhe’s girls’ school in Uddevalla. The girls’ school seems to have had great significance for that generation and their involvement in the suffrage movement in Uddevalla.

Maria Lundbäck’s atelier had a branch in Trollhättan. At her death in 1927, the enterprise was taken over by the photographer David Almquist and his wife. Maria Lundbäck bequeathed a lesser part of her fortune to Hildur Andersson. Most of her estate went to her surviving relatives as well as to the Home for the incurably ill. Maria Lundbäck and Hildur Andersson are buried together at the Northern Cemetery in Uddevalla. 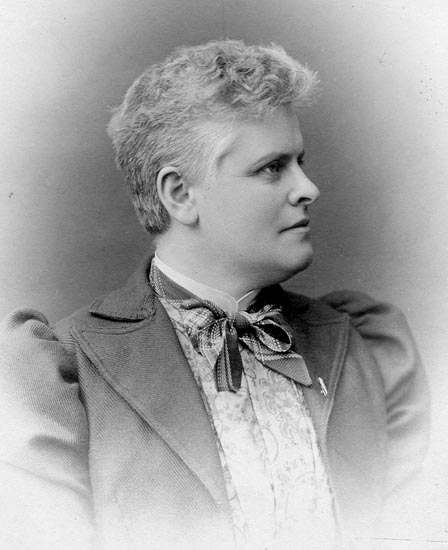