Mary Anderson served as head of the American Women’s Bureau in 1920. By the time of her retirement, in 1944, she had been responsible for ensuring employment conditions for millions of women, both during times of peace and war.

Mary Anderson was born in Saleby, just outside of Lidköping, in 1872. She was the youngest of seven children born to her parents, Magnus Andersson and Matilda Jansdotter. Her parents were tenant farmers at a farm that was large enough to have employees. However, following a few years of poor results towards the end of the 1880s Mary Anderson’s father was no longer able to cover his tenancy fees. He, along with many others who found themselves in the same situation, headed for Stockholm to negotiate with the Crown, his landlord. His supplication to the Crown failed and he lost his farm. This meant that Mary Anderson, who was not keen on domestic work, needed to find a paid position. At this time it was the norm for a woman in her position to take a job as a maid.

Mary Anderson’s sister, Anna Magnusdotter now married as Lind, had already emigrated from Sweden two years earlier and was now settled in the USA. She suggested that Mary Anderson, along with another sister named Hilda now married as Larsson, should follow suit. Their father took a more sceptical view of his daughters’ plans than their mother who believed that a woman should be able to follow her own volition. Mary Anderson and her sister Hilda both left for America in the spring of 1888. At this time Mary Anderson was 16 years old and hoped this move would afford a means for her to avoid working as a domestic. This did not come to pass. Her first job in her adopted country was dish-washing at a residential unit for forest workers. In the period leading up to 1894 Mary Anderson went through ten different employers. These frequent changes proved profitable to her. The lowest pay she had received was $1.50 a week, including room and board, as a maid. When she changed to paid industrial work by taking a job as a closer and a seamstress at a shoe-factory her pay rose to around $14 a week.

Eventually Mary Anderson settled in West Pullman, a suburb of Chicago, where she remained until 1917. She was content with the social aspect of factory work and when some of her fellow female workers suggested that she join the union she decided to become informed on the subject. The factory women attended a meeting where they learned that trade union membership could gain them higher salaries and shorten their working hours and naturally they all decided to sign up. Within a year Mary Anderson was chair of the 150 female members of the local branch, known as Stitchers Local 94, of the Boot and Shoe Workers’ Union. She represented these women on various councils and she was also the only woman and the only unpaid representative on the trade union’s executive committee.

At that time Chicago and Boston were centres of the American trade union movement and Mary Anderson enjoyed being in the heat of the fray. Every day, having spent ten hours at work, Mary Anderson dealt with her trade union duties, even at the weekends. She herself described the first year as a learning curve, and the things she learned had a life-long impact on her. Her first insight was that through trade unionism the need to frequently change employers – which she herself had experienced – became unnecessary. Instead of changing jobs workers could, as a group, negotiate to improve their working conditions and have these improvements apply across the board. The second insight she gained was that women were hardly represented within the American trade union movement, which had been set up on behalf of male workers. The reason for this was that, to a greater degree than was the norm in Europe, most men believed that women only formed part of the workforce until they got married, after which they became housewives. Further it was believed that women could tolerate less acceptable working conditions and lower salaries as they were not providing for a whole family. Thus, trade unions were formed for the benefit of men who held lifelong jobs in qualified professions, not for women who only worked short-term in simpler professions.

Mary Anderson literally dedicated her life to organising female workers and then to assisting the trade union with negotiations. Indeed, she herself said that she never found the time to get married. In addition to the Boot and Shoe Workers’ Union Mary Anderson was also active within the Women’s Trade Union League (WTUL). The latter was an organisation which crossed both professional and class boundaries and aimed to improve conditions for the working woman. Membership was open to all, including men. Mary Anderson, through her determined work, came into contact with and left an impression on major figures within the American women’s movement, including Jane Addams and Margaret Dreier-Robins. In 1911, after the great garment workers’ strike in Chicago which was supported by over 40,000 workers, Margaret Dreier-Robins suggested that Mary Anderson should become employed by WTUL as an inspector to ensure that employers stuck to their agreements with trade unions. Mary Anderson accepted this role and then gave up her job in the factory in order to become a trade union employee.

Following her ‘learning curve’ year Mary Anderson now found herself in a leading position given her past experiences. She believed that strikes should always remain the absolute last route of action, only to be adopted in cases of absolute necessity. This was particularly true given that long-lasting strikes had greater impacts on the workers than the employers. To her it was far more important to engage in mutual negotiations and arbitration with representatives from both the workers and the employers. She believed that real progress resulted from persistent efforts over a longer period of time. An important element of Mary Anderson’s work, therefore, comprised teaching union members to be disciplined and to have patience in order to achieve long-term goals.

Margaret Dreier-Robin’s efforts led to Mary Anderson being sent to Washington D.C. in 1917 in order to represent WTUL on a committee set up by the American Federation of Labor (AFL). At that time AFL was the largest federation of trade unions and its chair, Samuel Gompers, wanted the committee to advise on women’s interests within the labour market. Although Mary Anderson was left disappointed with the outcome it had nevertheless served as an important step. WTUL decided to keep her in Washington D.C. fulltime so that she could also organise trade unions in the city whilst carrying out her committee duties. Mary Anderson also made important personal connections, the most significant of which was with Mary van Kleeck, head of Women in Industry Service (WIS, now Women’s Bureau), U.S. Department of Labor, whom Mary Anderson would eventually succeed. WIS was a temporary war-time department of the Ministry of Labor set up during the First World War. Its role was to provide advice on making employment more effective and to improve working conditions for those women in industry who had been hired to replace male employees now seconded to military service. Although the department’s recommendations were only presented following the truce, perhaps because they were of secondary importance to military needs, they nevertheless were of significance to women’s employment situations in the long term. Whilst Mary Anderson was at its helm WIS became a permanent fixture in the summer of 1920 under the name of the Women’s Bureau. Mary Anderson remained in post until 1944, serving a total of five different American presidents. During Mary Anderson’s time in charge the Women’s Bureau not only worked on its own initiative but also worked at the behest of others. On her retirement the employment situation for women had been investigated across a range of professions in 32 states. The main purpose was to accumulate enough knowledge in the area to be able to supply advice and recommendations with regard to salaries, working hours, and job security.

Mary Anderson also faced frosty relations from certain quarters. She was accused of being both un-American and a communist, although neither accusation had any real impact on her working life. For 30 years she was engaged in a bitter struggle against the proposed Equal Rights Amendment (ERA) legislation which had been formulated by the National Women’s Party (NWP) when Alice Paul was its head. The ERA was an equally unifying and divisive force within the American women’s movement. It demanded an amendment to the American Constitution which would give men and women equal rights everywhere that American law held sway. The divisive factor was that several of the gains women had made were dependent on special legislation, namely laws that identified them as women and thereby gave them specific rights or specific protection. Should the proposed ERA become law this would entail that all such special legislation would cease to apply. To Mary Anderson, who had spent her entire union, and later government, career working to provide special exemptions for female workers, this naturally seemed to be a catastrophe. Her struggle against the ERA continued even after her retirement from the Women’s Bureau in 1944.

In 1919 Mary Anderson, in her capacity as representative of WTUL, attended the peace negotiations in Paris. There she negotiated with Woodrow Wilson on the subject of what eventually became the International Labour Organization (ILO), which initially served as a sub-organisation within the United Nations. Mary Anderson formed additional international connections on that trip which led to the founding of the International Congress of Working Women (ICWW), a collaborative venture for various groups concerned with women’s employment conditions. One of the connections Mary Anderson made through the ICWW was with Kerstin Hesselgren, a person she came to esteem highly. On these trips to Europe Mary Anderson also visited Sweden, her hometown and her siblings.

Mary Anderson gained her American citizenship in 1915. This decision had been spurred by talk of women gaining the right to vote in her then home state of Illinois. Mary Anderson never married. She spent most of her adult life living with her sister, Anna Lind, who was 20 years her senior, a widow, and in poor health. Following Anna’s death in 1934 Mary Anderson then lived, as she had done in her youth, alternately in the homes of friends or at boarding houses. This reflected her view that a worker should rent accommodation not own it. She believed that those who rented had greater freedom than their employers who either had major debts or needed to sell their house in order to move. Mary Anderson had herself undertaken several moves in order to gain better jobs and in order to raise her own standards of living. Despite all her efforts on behalf of improving women’s employment conditions she retained a positive attitude towards the right of those women to choose to be housewives if they so desired.

Mary Anderson’s leading position at a time when the number of women within the American labour market doubled meant that she was an influential individual. In 1935 she was named as one of the ten most powerful women and in 1941 she was awarded an honorary doctorate from Smith College. In 1962, two years before her death, the U.S. Department of Labor awarded her their service medal and, in 1991, that same department also elected her into its Hall of Fame.

Mary Anderson died in January 1964. She is buried beside her sister, Anna Lind, at Oak Hill Cemetery in Washington D.C. 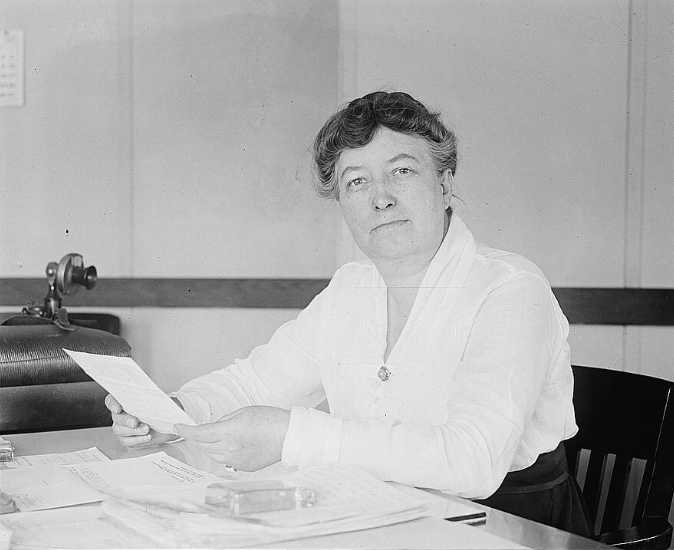