Mia Green was a photographer, a suffragette, and a member of the Haparanda town council. She was heavily engaged in social issues.

Mia Green was born as Maria Amalia Lundmark in 1870. She was born at the estate Noors gård in Roslags-Bro parish. Her mother, Maria Christina Lundmark, was unmarried and had taken a job as a maid at the estate just six months earlier. It is not known who Mia Green’s father was, but he probably hailed either from Piteå where her mother had previously worked, or from Skellefteå where her mother originally came from.

During the first three years of Mia Green’s life she moved back and forth between Noor and Norrtälje, depending on where her mother was working. In 1873 Mia Green’s half-sister, Anna Elisabet, was born and their mother married the tailor’s apprentice Gustaf Romulus. Mia Green was then sent north to live with her maternal grandparents who were crofters in the Skellefteå region. Her mother and her new family immigrated to America in 1890, and shortly thereafter her mother died. Mia Green never discussed her childhood when she was an adult, saying instead that she had no family. However, her later engagement in social issues indicates that her background experiences left a marked influence on her.

When Mia Green was no longer a child she moved to Piteå. There she worked as a maid but harboured greater ambitions. She was curious, artistically inclined, and driven. She saved up enough money to travel to Stockholm in 1890. Initially she intended to become a seamstress but once she had arrived in the nation’s capital she changed her mind and instead trained as a photographer, as this field offered growing career opportunities for both women and men.

On returning to Piteå she took on a job as an assistant photographer for Fredrika Bergström, one of the many female photographers who were already active in the Norrbotten area. As soon as she had obtained enough experience and funds Mia Green set her sights on Haparanda where there was no already established photographer. In 1895 Mia Green became that town’s first, and for a long time leading, photographer and her business came to include Kemi and Seskarö.

Initially things moved slowly. She rented a shed at Storgatan-Packhusgatan in Haparanda which she fitted out as a studio. A couple of years later Mia Green met the similarly aged Bror Ulrik Green, a teacher of music and special subjects at the town teaching programme. They married in 1898. She continued working after they married and began to use the name of Mia Green. From 1903 onwards she lived and worked in the same building along Sundellsgatan. She had her studio, darkroom, and shop there until she gave up her business in 1944/1945. The studio was located at the top of the building under a slanting roof and had a large window which let in the sunlight. In her shop she sold postcards and cameras.

Mia Green worked hard to combine her career with family duties. She gave birth to four children between the years of 1901 and 1913 without taking a break from her business. Her working day tended to start in the darkroom and studio as early as three or four in the morning so that she could remain undisturbed. Although she had a regular supply of assistants she was involved in all aspects of the work at the studio. She placed great emphasis on copying, retouching, and washing in order to obtain the best results. She alone was allowed to undertaking retouching.

Mia Green worked both inside and outside the studio. She was the first person in Haparanda to get a bicycle in 1900. She used it regularly to get her out and about when photographing. She used several different cameras, including a large studio camera on a tripod with a curtain as well as several lighter and smaller cameras which were better-suited to being portable.

Mia Green employed several students and photographic assistants, all of which were women. Many of them eventually went on to open their own studios. The first of these was Hildur Ortman, who took over Mia Green’s old studio at Storgatan-Packhusgatan in Haparanda. Ida Barrel, née Nuoliniemi, was one of Mia Green’s students around 1920 who later set up a studio in Gällivare, whilst Hilda Andersson opened a studio in Övertorneå. Mia Green also had a studio in Kemi where she hired a manager whom she herself had trained. At the same time Stina Svanström and Ida Björn were active in Karungi and Torneå, respectively.

During the First World War Karungi and Haparanda came into focus as mail, merchandise, and people from all over the world crossed the border. Haparanda was the eye of the needle and Mia Green was able to capture, with a journalist’s open gaze, the dramatic developments using her camera. She had three assistants at her studio during the war years. She sold her photographs to local and national press. She photographed refugees from all over the world, wounded soldiers, military staff, smugglers, high-ranking diplomats, and politicians, women’s volunteer defence members, Red Cross nurses, and endless amounts of mail and merchandise.

The suffering caused by the war was in full view in Haparanda. More than 63,000 wounded soldiers came through the town during the 1915—1918 period. Mia Green was not satisfied with simply documenting events, she also tried to help those in need and showed special care to wounded military personnel.

The monument to the war-wounded in Haparanda was erected at the cemetery in 1919 in memory of the 210 soldiers who died during transportation. Mia Green was the instigator behind this monument. When no funds had been set aside to maintain the monument, she took it upon herself to care for it for many years. She watered flowers, laid wreaths, and planted trees. Mia Green also asked to be buried near the monument. She was awarded both the German and the Austrian Red Cross medals in recognition of her efforts.

Mia Green was also politically active. The suffrage organisation Föreningen för kvinnans politiska rösträtt (FKPR, the local section of Landsföreningen för kvinnans politiska rösträtt, LKPR) was set up in Haparanda in 1907 and Mia Green became a member of the association. In 1912 FKPR participated in the local council election under the name Kvinnopartiet (the women’s party) and Amanda Montell was subsequently elected as the first female member of the town council. Mia Green was elected onto the board of the FKPR in 1913, and also became a member of the central executive.

In 1914 a women’s muster, Kvinnornas uppbåd, was set up under FKPR’s leadership in Haparanda. A market day was organised which raised almost 1,100 kronor. The women’s muster also held sewing days on which clothes were produced for the national militia and the families of the mobilised. The priority was always to do everything that could be done to help the large numbers of refugees passing through town: more than 2,000 people arrived daily by rail alone.

Mia Green was elected onto the town council as a representative of the conservative party Högern for the 1919—1920 period and the 1923—1926 period. Her core issue during these periods was the creation of a suitable home for the elderly poor of Haparanda. These people often ended up in the poorhouse where they lived in miserable conditions.

In 1917 Mia Green, along with Almus Ejfrid Lundin, postmaster, had set up a home for the elderly called Samfundet Haparanda ålderdomshem. The town council had promised that the money made from selling the harbour track which had been laid during the war would go directly towards building this home for the elderly. However, the proposal faced opposition when it came time to deliver on the promise. Mia Green’s own proposal to use the town’s entertainment taxes for funding the home was similarly rejected. Mia Green did not give up, however. Instead she privately raised a large sum of money. It has been said that she approached several of the so-called “gulaschbaroner” (literally “goulash-barons”, war profiteers) who had become rich during wartime and she more or less brow-beat them until they donated some money. The care home records only state that fundraising “occurred successfully”.

The so-called Engman building was purchased for 27,500 Swedish kroner and donated to Haparanda town in 1921 on the condition that the town would continue to run the enterprise. In 1923 the first proper home for the elderly in Haparanda was inaugurated. The building has since been demolished but there is still a home for the elderly on the same site. The organisation changed its name to Samfundet de gamlas vänner (friends of the elderly society) following the inauguration of the new home. The society’s aims remained to provide affordable, sometimes free, accommodation in the annexe of the home for the elderly poor who were in good standing. Further, gifts were handed out to the needy elderly and the ill who lacked social support. Mia Green continued to serve as a treasurer.

Those who remember Mia Green describe her as impulsive, outward-looking, and determined. She had mastered the skill of persuasion and never gave up until she had achieved what she had decided to do. She was clearly a strong person who worked exceedingly hard — her studio was open all week long whilst her family and major social engagements took up much of her time. Charity meant far more than words to Mia Green. She was well-known in Haparanda for always taking care of the poor, beggars, and those needing help. She would supply everything from a basket of food to clean clothes to arranging jobs for both the young and the old.

Very little has survived of Mia Green’s extensive photographic output. Her collection of images passed through the hands of three different private owners before Haparanda municipality took charge of it in the early 1970s. By that time the collection was already severely reduced in size. A major exhibition in 1961, held in conjunction with the release of the book entitled Haparanda förr och nu, displayed both printed photographs and glass negatives, side by side. One night around 100 glass negatives vanished without trace. They have never been rediscovered. A number of her glass plates are said to have been lost when the Green building was demolished.

Mia Green’s memory lives on in Haparanda and she is hailed as one of the town’s pioneers. In 1988 the Mia Green park was opened in Haparanda, including a bronze bust made by the artist Lars Stålnacke. The inscription chosen for the bust reads: “Photographer, pioneer, humanitarian”.

Mia Green died in 1949. She is buried at the Old Cemetery in Haparanda. 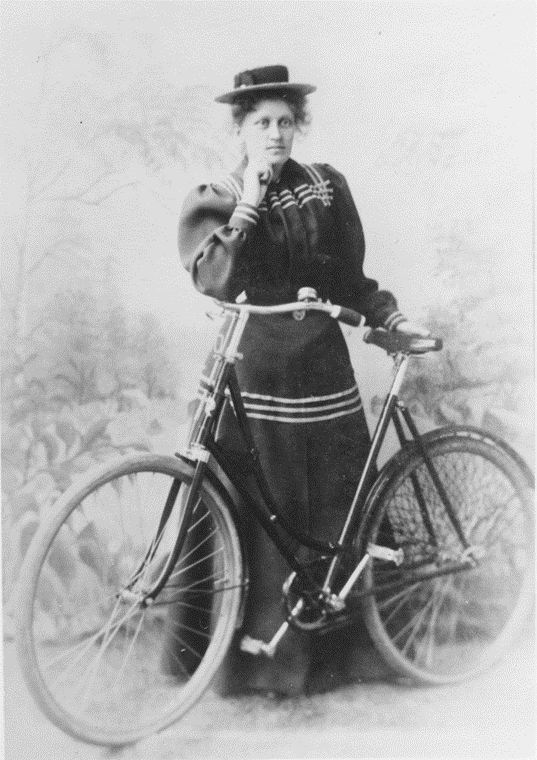