Maria Rieck-Müller was a journalist and an author whose books form part of the Norrland romantic tradition of writing.

Maria Rieck-Müller was born in Sundsvall one stormy night in March in 1863. Her father, August Sundberg, was a successful wholesale retailer and ship-owner. Her mother was named Catharina, née Gröndahl. Maria Rieck-Müller grew up in a well-to-do home where socialising with the culturally-aware Edström family at Fridhem provided a particularly important resource for literary and musical experiences.

Maria Rieck-Müller spent her earliest school years at the Emelie Gyllencreutz’ school for girls in Sundsvall. She then moved onto the newly-established Sundsvalls nya elementarskola för flickor (new elementary school for girls). Maria Rieck-Müller has herself described her school years as far from straightforward and involving many difficult subjects. Her best subject was Swedish and in a draft of her memoire from 1952 she recounts how her essays were often read out loud in class. She rounded off her eight years’ education by attending Ingeborg Tauström’s “Forsättningskurs för unga damer” (continuation course for young ladies) in Stockholm, where she was able to indulge her growing interest in literature and culture.

Her mother was poorly and suffered from rheumatism which meant that Maria Rieck-Müller often accompanied her to Stockholm and Loka well where her mother took various treatments. On one of these occasions, when Maria Rieck-Müller was sixteen, she and other young folk present agreed to find something fun with which to entertain the poorly patients. Maria Rieck-Müller thus wrote a one-act play which was then performed. This was the first time she wrote anything for a public audience.

In August 1885 Maria Rieck-Müller married Jacob Rieck-Müller, who was an engineer and railroad builder. The family briefly lived in Sundsvall but quickly began to lead an itinerant lifestyle in Norrland following the laying of northern train-tracks. As the family had no one settled residence Maria Rieck-Müller gained intimate knowledge of how different people lived and their habits, their customs and traditions. During this period she also gave birth to five daughters: Gudrun, Karin, Marit, Sonja, and Jenny.

After a few years of constant moving around various small places the family settled in Vännäs in 1895 in a newly-built house called Villa Fagerlid. An intensive period ensued. Jakob Rieck-Müller was one of the driving forces behind the expansion and development of the small village and is considered to be the founder of Vännäs municipality.

In Vännäs Maria Rieck-Müller had the time and the peace to write down all the impressions and memories she had collected during the previous years. Her first short-story collection, Fjällbyfolk: bilder från öfre Norrland, was published in 1899. It describes the people Maria Rieck-Müller had come to know in the mountain villages.

She released her next book, entitled Mellan haf och fjäll, the following year. This, in turn, was followed by Flyttfåglar in 1905, an autobiographical account written in the form of a diary. In it she portrayed the lives of the Rieck-Müllers and their experiences during the laying of the northern main railway line.

During the autumn of 1900 Maria Rieck-Müller and Jacobine Ring set up a cultural journal called Nordan, which was subtitled Illustrerad tidskrift berörande Norrland, dess naturrikedomar samt om norrländska företag och arbeten på industrins, kulturens, konstens och litteraturens fält (illustrated journal about Norrland, its natural treasures as well as Norrland companies and works within the spheres of industry, culture, art, and literature). Maria Rieck-Müller contributed her own short stories, poems, and articles to the journal. The journal only lasted for a short time and folded after six issues.

The family’s time in Vännäs was similarly brief. By 1902 they had already moved to Stockholm for financial reasons as her husband had gained a more lucrative job there. Although Maria Rieck-Müller would have liked to continue writing the family needed to line their coffers and in the ensuing years she mainly worked as a freelance writer for various newspapers and journals, supplying them with causerie-style articles, reports, and reviews. Her work was published in Aftonbladet, Gefle-Posten, Göteborgs Handels- och Sjöfarts-Tidning, Sundsvalls-Posten, Svenska Dagbladet, Vårt Land, Nya Dagligt Allehanda, Öresundsposten, Dagny, Idun, Vecko-Journalen, and Svenska Folkviljan. She signed them off using either her own name or a pseudonym, such as Sarah, Liv, Appolonia, Pan, R., and M.R.-M. At the same time Maria Rieck-Müller continued to write and publish short stories and accounts, many of which were connected to Norrland.

Maria Rieck-Müller took great interest in Norrland’s history and culture. Her desire to disseminate knowledge of the culture and spirit of the Norrland people throughout Sweden can, for example, be seen in Från Ådal och Nordlandskust, en efterskörd, published in 1916. This edition included the work of her admired late colleague Pelle Molin. In collaboration with Olof Höfberg, her friend and author, she produced a local history book in 1920 entitled Medelpad och Ångermanland and the following year it was released in a school textbook edition as part of the Läseböcker för skola och hem series. The work which had gone into producing the book had taken several years of travelling and archival and original research. She considered her last publication, Mikael Fluhr: en prästroman, which came out in 1928, to be her best written work.

Maria Rieck-Müller’s work belongs to the Norrland romantic tradition of writing which sought to safeguard the pristine Norrland nature and the unaffected people who live there. When she was most active as a writer she was considered to be Norrland’s pre-eminent author. Several of her works have been translated into German.

Maria Rieck-Müller died in 1955. She is buried in the Sundsvall cemetery. 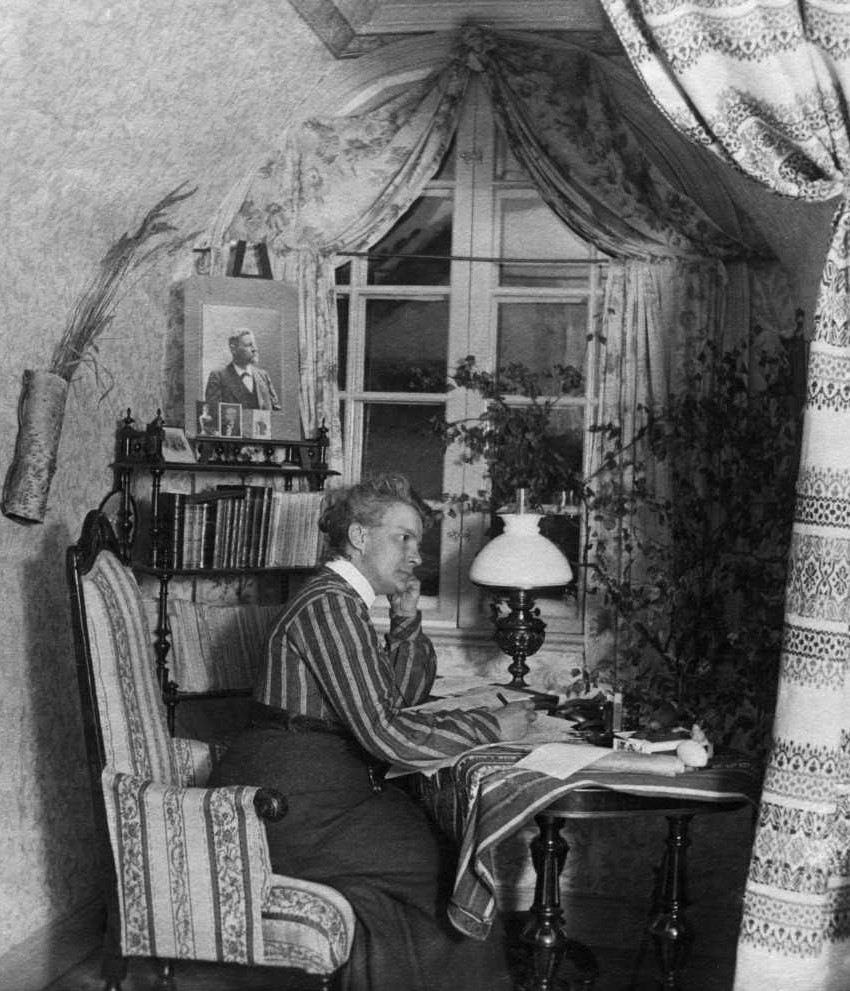