Maria Sandel was one of the early working-class writers of Swedish literature. She was also one of the few who placed groups of women at the centre of her stories.

Maria Sandel was born in 1870. She was the daughter of an unmarried working-class woman called Maria Charlotta Killander and a male servant called Carl Gustaf Sandell. She grew up in the poor quarter of Kungsholmen in Stockholm. She took her father’s name which she shortened to ‘Sandel’ when she began to write. When she was 17 years old she travelled to the USA to work as home help. She returned to Sweden four years later and then spent the rest of her life living in Kungsholmen.

Maria Sandel and her mother were tricot knitters. Until 1902 they also ran a small milk shop together but were forced to close it when the building they lived and worked in was condemned by the health authorities. They then moved into emergency accommodation on Mariebergsgatan where Maria Sandel lived out her days, initially with her mother and then from 1908 onwards on her own. Maria Sandel, like her mother, went deaf when she was just 25 years old, and shortly thereafter she began to lose her sight. According to accounts she became increasing shy and kept to herself, presumably due to her physical disabilities.

Maria Sandel’s first published work appeared in the Swedish-American journal called Nordstjernan. Shortly thereafter she became a frequent contributor to Social-Demokraten, Morgonbris, and other workers’ publications. She joined Stockholms allmänna kvinnoklubb (public women’s club) which later became Kvinnornas fackförbund (women’s trade union), and she was the person who came up with the name for Morgonbris. She initially mainly wrote short stories and songs to do with the class struggle, two very popular genres within the early workers’ movement. Often these types of literary contributions were anonymous but Maria Sandel always signed her full name at the bottom of her pieces.

Maria Sandel had become reasonably well-read by accessing workers’ libraries even though she had been forced to quit school at the age of twelve in order to contribute to her family’s income. During her time in the USA she had mastered the English language and she had also learned enough German and French to allow her to read literature in these languages.

Maria Sandel’s first book entitled Vid svältgränsen was published in 1908. It comprised a collection of short stories which had previously been published in various journals and newspapers within working-class print media. She released her novel Familjen Vinge. En bok om verkstadsgossar och fabriksflickor in 1909 through Fackföreningarnas tryckeriaktiebolag. A few years later she re-released it in a new edition through Albert Bonniers Förlag, thus making Maria Sandel one of the first working-class writers to get published by a major publishing house. However, from her next novel onwards, namely the 1913 Virveln which dealt with the major strike of 1909, she only published her books through Tidens förlag, a publishing house which supported the workers’ movement.

Maria Sandel depicted the poor areas of Stockholm and tended to place hard-working women at the centre of her stories. She described their struggles to get enough food, clothing, and money to pay the rent for themselves and their dependents, about working at home on behalf of the textile industry, about conditions in the factories, about hard labour in wealthy houses, about long working days and women’s salaries which did not cover the bare necessities for living. She wrote about class divisions, about conflicts between workers and their employers, and she wrote of addicted and abusive men. In the worlds she painted men also suffered hardship but, despite gaining higher salaries than women they tended to use them for their own benefit or to feed their addictions, making the women sole earners in practise. Her stories revealed a class difference between the sexes as far too many of her male characters profited from their privileges at the expense of women and children. Life had rarely been portrayed in this manner before.

Her 1924 book Droppar i folkhavet tells of two women – one older, the other younger – who help each other out in order to make ends meet both financially and practically. They are not related but, along with their respective children, they create a kind of extended family and provide mutual support for each other. They live in a society lacking any kind of social and financial safety nets for unmarried mothers and their children. This novel also contains a chapter about two female prostitutes who enter into a relationship with each other and also create a type of family, which includes their landlady.

Maria Sandel’s stories bear the marks of her own experiences. She describes society from the point of view of people who have no property, always from a feminist and socialist angle. Recurring themes in her work are suffrage, the dreadful working conditions women faced, prostitution, illegal abortions, unmarried mothers, alcoholism, and the general unreliability of men, and poor and cramped housing conditions. However, her work also covers female solidarity, pride, and fellowship, their joy in small everyday highlights. This is a world where the home and a community of neighbours provide the ties that bind for individuals. This allows them to establish a mutual network which keeps the destructive forces at bay.

Maria Sandel died in 1927. She is buried at The Woodland Cemetery in Stockholm. A street in Kungsholmen, Maria Sandels gränd, has been named after her. 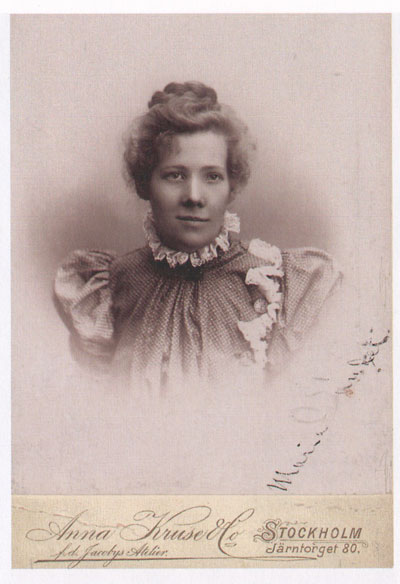