Maria Wilckens was a business woman and works owner living in Västerås at the beginning of the 1700s.

Maria Wilckens was born in 1665 in Stockholm, where she grew up in a wealthy merchant family of German origin. Her childhood home was a stone building owned by the family, very near Stockholm Castle. When she was nine years old, her father Heinrich Wilckens died. Apart from being a citizen and merchant, he was also the leader of the German congregation in the city. Her mother Catharina died six years later, and Maria Wilckens at the age of only fourteen was an orphan. Nothing is really known about the rest of her youth. Perhaps she lived in her sister Rebecka’s home, the vicarage in Munktorp in the province of Västmanland, but it is more probable that she remained in Stockholm.

Maria Wilckens inherited a share in the family house after her parents’ death, and also money and goods and chattels, all valued together at the sum of over 6,000 daler in copper coins. Another 1,000 daler had also been set aside for her wedding and dowry. There were certainly many suitors who were interested in the young, wealthy woman. When she was 22 years old, Maria Wilckens married and her wedding took place in Storkyrkan in Stockholm. The bridegroom was Lars Olofsson, a senior official from Västerås who was almost thirty years older, and she was his fourth wife. The move to the small town of Västerås, with only about 2,500 inhabitants at that time, must have necessitated tremendous adjustment. Her home in Västerås was her husband’s family estate. It was a large property, centrally situated near the city’s old square, close to the city hall. According to descriptions, the estate consisted of two ”beautiful” stone buildings completely surrounded by large, ”gracious” timbered buildings.

A daughter, named after Maria Wilckens’ mother Catharina, was born soon after the couple’s first wedding anniversary, but died after only a month. Two sons also died early. Her stepson Johan from Lars Olofsson’s previous marriage died at a young age too. Only their son Olof, born in 1698, reached adulthood. In connection with their studies, both Johan and Olof started using the surname Westmarck.

Maria Wilckens and her family belonged to the highest social circles in the diocesan city of Västerås. Lars Olofsson was a well-reputed councillor who enjoyed great respect. However, while he actively participated in the public affairs of the city, Maria Wilckens was referred to the care and superintendence of her household and its matters. This situation changed completely however with her husband’s death.

When Lars Olofsson died in 1702, Maria Wilckens was 37 years old. She honoured his memory by donating clothes and shoes to fifty poor schoolboys. As his widow, she took over his estate, fortune and merchant business. She also took over his franchise and looked after the businesses well, becoming an exceptionally wealthy and powerful businesswoman with high status in the town. Västerås was at that time an important export harbour for metal goods from Bergslagen. ”Madame” Maria Wilckens, as she was most often called, traded mostly in bar iron from works and mining producers in Västmanland. She was an investor, and received bar iron as payment for her investments in various works, among them Svanå north of Västerås. She later had the bar iron transported on to Stockholm with her own sailing ships and captains. She also carried out a private lending enterprise, in which she lent money to those who were unable to travel to the nearest bank, which was in the capital.

Maria Wilckens could call herself works owner from 1704, when she took over the little ironworks Trångfors on the Kolbäcksån river, following her claim on the estate of the mayor’s widow. She also obtained the title deeds to a neighbouring farm in Åsby in the parish of Berg, which she had acquired earlier. Trångfors consisted of a bar iron hammer with two hearths, but the ironworks had long been badly maintained by the previous owners and gone up in flames. Maria Wilckens took on herself the rebuilding of the works so that two smiths, three apprentices and two coal boys were employed there from 1705. Some years later, she also employed a master smith. The bar iron produced was transported by road to Västerås, where it was weighed in on the town scales and then shipped away. It was difficult to make the production profitable, however. Running the works demanded vast amounts of wood and coal and competition was hard when it came to the limited access to forests. A favourable development is noticeable in 1715 and onwards, when the weighing in of bar iron from Trångfors in Västerås increased markedly.

Her widow’s status gave Maria Wilckens a certain freedom and opened up possibilities that were unavailable to her when she was married. It was however not entirely unusual for widows to enter into trade, and several contemporaries were living in Västerås. Her business transactions were a recurrent subject in the town courts, and she supported and contributed economically to various purposes, when that was requested by the town or the crown. Otherwise, however, she kept her distance from local politics. At the town hall, she communicated in writing or was represented by an agent who gave voice to her views.

A tough and lengthy dispute between the strong-willed Maria Wilckens and sections of the burghers on the repayment of a loan and the level of her taxation culminated in 1715. She wanted then to resign her burghership in protest, but was refused by the board since she was the wealthiest person in town and therefore a significant tax-payer. Three years later, however, she left Västerås, after having once again entered into wedlock. Before that, she handed over the administration and running of Trångfors and Åsby to her son Olof, who then lived there with his newly started family.

After fifteen years of independence as a widow, Maria Wilckens returned to life as a minor, when she married Hans Baumgardt who was ten years younger than she. He was a county official, later an assessor and he was ennobled in 1719 with the name Adlerbaum. They settled down on the manor estate Solinge in Romfartuna north of Västerås, while her old home in the town was rented out. At the spa Sätra brunn, the couple owned yet another house.

Maria Wilckens died at Solinge when she was 63 years of age in 1729. Even if she seems to have been buried in Romfartuna, there is a lavish epitaph in Västerås Cathedral with her and her first husband’s portraits. The text describes Maria Wilckens as Lars Olofsson’s ”dear wife” and ”virtuous Matron”. The portrait of her has been described as realistic, and she is wearing a costume and a hairstyle that stem from the time of Karl XII. During her lifetime she had been very generous with donations to the Cathedral and even today there are a pair of gilded number boards there donated by her. 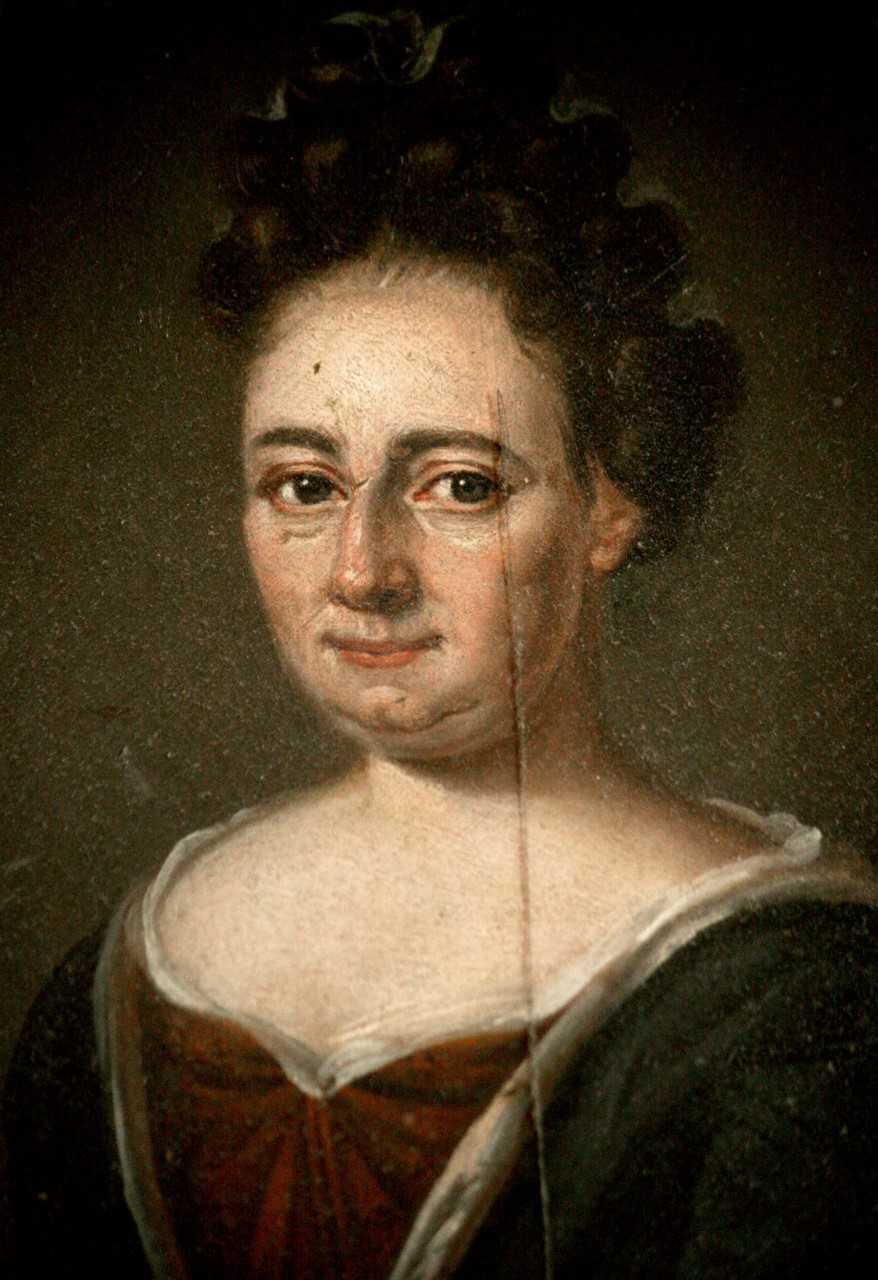