Marianne Kärrholm was the first woman professor at the Chalmers University of Technology in Gothenburg.

Marianne Kärrholm was born on 22 December 1921 in Helsinki, Finland. She was the daughter of Märta Lindhe and Karl Hellsten, and she had one brother, Martin Hellsten. After her mother’s second marriage in 1936, she moved with her mother and brother to Malmö. The family later moved to Gothenburg.

Marianne Kärrholm attended secondary school in Malmö (now Sankt Petri school) and took her school certificate there in 1937. After moving to Gothenburg, she matriculated at the girls’ grammar school Högre allmänna läroverket för flickor in 1940 with an extra test in 1941. Thereafter she started studying at the Chalmers University of Technology. During her student years, she trained at various industries: SKF, Göteborgs Vattenverks laboratorium and Apotekarnes droghandelsaktiebolag. Marianne Kärrholm qualified as a civil engineer in chemical technology at Chalmers University of Technology in 1945. She gained particularly good marks, according to a scientific assessment a few years later.

In 1946, she married Gunnar Kärrholm, and the marriage lasted until her husband’s death in 2006. They had three children, Helena, Johan and Pia. Gunnar Kärrholm was appointed professor of building construction at Chalmers in 1960.

After qualifying as a civil engineer in 1945, Marianne Kärrholm worked as a research engineer at the textiles research institute (Svenska Textilforskningsinstitutet, TEFO), situated at Chalmers. She cooperated closely with the great Swedish textile companies in Borås and Norrköping, doing research on various aspects of textile production. Scientific studies and publications led to her doctorate in 1960 and appointment as senior lecturer the same year. The title of her thesis was: Solvent-assisted dyeing of wool. In 1960–1971 she worked as section manager and laboratory researcher at TEFO.

During her time at TEFO, Marianne Kärrholm came in contact with various types of consumer issues, mainly as a member of the State consumer council in 1959–1972, the Swedish standardisation commission’s (SIS, now Sveriges standardiseringsförbund) technological committee in 1975–1988 and the insurance company Folksam’s scientific council in 1973–1991. Consumer issues had acquired ever greater importance during the 1950s and 1960s. This started with the research institute Hemmens Forskningsinstitut that became the State institute for consumer questions in 1957. The State consumer council was constituted at the same time and was at that time an organ for the coordination of consumer information and consumer research. All existing consumer organs were wound up when Konsumentverket was established in 1973.

A new consumer-focused research field was established in 1968 when the technological research council was reconstructed as Styrelsen för teknisk utveckling, STU. A new field of responsibility was thereby created within STU’s technology development, entitled consumer technology. This research was intended to develop new products or improve already existing products. The industrial production processes were considered only to be of lesser importance for the consumers while on the other hand the products’ usefulness and characteristics when being used were of great interest. STU and the consumer council Konsumentrådet initiated a survey the aim of which was to obtain a basis for suggestions on hard and fast research and development projects in the field of consumer technology. Marianne Kärrholm was given the assignment of leading this survey. It resulted in the book Konsumentteknik: konsumentinriktad forskning på livsmedel, kläder, bostad, fritid. It was published in Swedish in 1971 and in an international edition in 1972. The research group on consumer technology was established in 1971 on the assignment of STU’s board to get the work of development going according to the survey’s suggestions. Marianne Kärrholm was appointed as the leader of the research group which was established in Gothenburg.

Consumer technology was established as a postgraduate subject at the Chalmers University of Technology in 1980. Marianne Kärrholm was appointed associate professor. The consumer technology research group was attached to Chalmers in 1982. After two years it was made a department. The associate professorship was turned into a personal professorship for Marianne Kärrholm in 1984. She then became the first full woman professor at the Chalmers University of Technology.

The department defined the field of work in 1986 as “studies of the relationship between people and technology from a users’ perspective”. Research and knowledge development in consumer technology concerned first and foremost methods based on the users’ requirements and capacity, as well as the evaluation of new technological solutions. This new knowledge was applied in many fields like for example clothing, personal hygiene, rubbish disposal, working environment, tools and information in everyday life. In the field of clothing, appropriate working clothes were first and foremost developed for the engineering industry, police and healthcare as well as clothing for the elderly and functionally disabled. In the field of personal hygiene, toilet, shower and washing equipment was developed as well as the healthcare environment. Studies and the development of manuals and instructions for use also grew into an interesting field in consumer technology. The professorship was declared vacant when Marianne Kärrholm retired in 1989.

Marianne Kärrholm was an open, curious and engaged person, with a strong will and a vision. She contributed to the engineers’ education that is today being implemented at the Chalmers University of Technology, especially in Design and product development, that are strongly influenced by the user perspective. She was awarded the Chalmers medal for her contributions in 1990. Marianne Kärrholm appears in many ways to have been a pioneer.

Marianne Kärrholm died on 21 January 2018 in Gothenburg. She lies buried in Marieberg Cemetery. 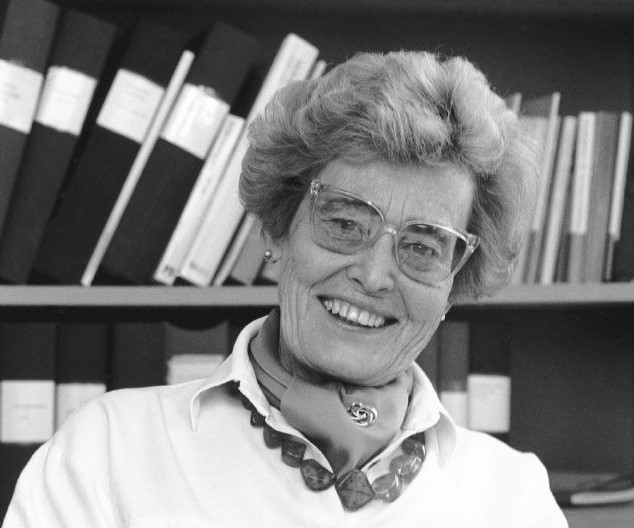