Märta Boman was the first female member of parliament who represented Högern (today the Moderate Party) in Norrbotten.

Märta Boman was born in Uppsala in 1902. Her father, Axel Alfred Lindau, was a tinsmith and her mother, Emma Matilda, was a seamstress. Märta Boman was the eldest of six children. When she was 20 years old she began attending the Salvation Army school in Stockholm and until 1939 she was an officer in the Salvation Army. Her first posting as a Salvation Army officer was to Kiruna, where she dealt with youth-related matters as well as social and international issues. She was meant to receive a salary of 18 kroner a week but for various reasons this was halved to 9 kroner, and sometimes she didn’t even receive that.

In 1940 Märta Boman moved to the Råneå region and married Gustaf Boman, a farmer. She now had to look after a farm, as well as her husband’s four children from his first marriage. It was not long before the couple had a child of their own as well as a foster child. In addition to household chores and domestic work Märta Boman also worked at the telephone exchange. Märta and Gustaf Boman’s home was open to Salvation Army activities by allowing religious services to be held there in the summer months. At Christmas they served “julgröt” (Christmas porridge) in their kitchen.

Gustaf Boman’s family was politically engaged and active. Märta Boman accompanied her husband to a meeting of the Höger party in Luleå and then joined the party’s women’s group in Råneå. She very quickly became the chair of that group. She was also active within the temperance association Vita Bandet (white ribbon) and its associated youth welfare branch, as well as being a member of the board of the Johannisberg reform school in Kalix for 25 years. She sat as a representative of Högern in Råneå municipal council, and she was a member of Norrbotten county council for two terms, as well as a parliamentary representative for almost 20 years. Further, she was deputy chair of Högerns Kvinnoförbund (today the Moderate Women) and served on the party executive.

In 1945, when she was 43, Märta Boman was elected into the second chamber of parliament within Norrbotten electoral circuit. In the most northerly parts of Sweden becoming a candidate for parliament as a woman was not a straightforward process. Märta Boman was urged to visit the Laestadians in Tornedalen, accompanied by a commissioner. When she had previously been there as a Salvation Army officer she had been cold-shouldered. Her description of this meeting was as follows: “When we arrived we were met by 55 serious older men, but not a single woman”. Märta Boman gave her speech and then the commissioner said: “Well, now you have heard Mrs Boman and what she represents. Will you accept her as your candidate for parliament?”, and he was met by silence. Then the oldest man present stood up and said: “She is a gift from God whom we have no right to oppose”, which meant that Märta Boman had been accepted. She then visited the Sami settlements and seasonal settlers who lived between Kiruna and Nikkaluokta. She was not only accompanied by the party commissioner but also by the rural district nurse and midwife. They travelled all the way from Kiruna to Nikkaluokta on foot in order to get to Torne marsh, carrying backpacks and walking sticks.

Märta Boman was very diligent in her parliamentary work. She composed 73 of her own motions during her time in parliament, the majority of which were focused on agricultural matters, issues relating to sparsely populated areas, as well as matters involving welfare and care. She often spoke in reference to headlines such as “Politicians should be their fellow humans’ helpers” and “Human peace is the global peace”. She achieved a lot in her work whether it was within the political sphere or that of the Salvation Army. Svenska Dagbladet expressed this after she had been elected to parliament: “A remarkable destiny led to Helgeandsholmen”. Märta Boman was viewed as sure-footed, both in terms of her faith in God and in her political views. She was reliable and always up to speed. She resigned as a representative in 1964. 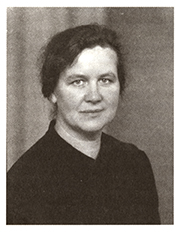