Märta Helena Reenstierna, also known as Årstafrun (the Lady of Årsta), was the author of a diary. Her diary serves as a personal record as well as a cultural-history document. It reflects everyday life and special occasions as these unfolded at a Swedish country estate between the late 1700s and the early decades of the 1800s.

Märta Helena Reenstierna was born in 1753 in Hov congregation in Älvsborg county. Her parents were Lieutenant Abraham Reenstierna and Baroness Catharina Maria Köhler. In 1772 Märta Helena Reenstierna was sent to live with a relative in Stockholm in order to become proficient in languages and to learn how to run a household. Two years later, still in Stockholm, she met Christian Henrik von Schnell, a cavalry captain who was twenty years her senior. They married in June 1775 and settled at Årsta estate, just south of Stockholm. Between the years of 1776 an 1787 the couple went on to have eight children together. Four of these children were girls and four were boys. Only one survived into adulthood. By the early 1790s Hans Abraham was their only living child.

In 1793 Märta Helena Reenstierna began to keep a diary and she carried on keeping it until 1839. Årstadagboken (the Årsta diary) is primarily a farming diary as the entries follow the yearly cycle at Årsta farm. Every year on the 1 January Märta Helena Reenstierna would start a new volume which ended on 31 December, giving thanks for the year which had just finished. She summarises all the changes in weather as well as work involving livestock and planting throughout the course of every year. She also details the indoors work undertaken by women, in the kitchen, the baking house, and the reception room, as well as berry- and apple-picking in the kitchen gardens. Her entries also record animal slaughtering, sowing, and harvesting. The same activities are noted year after year. In the same vein she records how feast-days were celebrated: Christmas, Midsummer, the hay harvest, ‘gåsafest’ (goose-eating feast), name days – especially Helena day in late July which was celebrated with gun salutes and a well-attended party.

Märta Helena Reenstierna’s diary is replete with specific depictions of daily life including interactions between the lady of the house and her three maids. There was apparently a good relationship between mistress and servants, albeit laziness, unreliability and drunkenness caused the author irritation. Märta Helena Reenstierna was a keen reader and she often notes in the diary which books she is reading: in 1795 she read Goethe’s Werthers lidande, which she found “excellent”; she read Baron von Münchhausens sällsamma resor together with her son; and in 1802 she read Fielding’s novel Tom Jones with great enjoyment. The diary makes it apparent that her reading was mainly for pleasure.

Märta Helena Reenstierna was an active and hard-working individual, who was constantly occupied either indoors or in her garden. Selling garden-grown apples and berries in Stockholm supplemented the household income. On those days she was not baking, making jam, cleaning, or spinning, mending socks or undertaking other activities traditionally viewed as “womens’ work”, she tended to travel by carriage into Stockholm in order to purchase cloth, order a new hat for herself, or a new waistcoat for her husband. She often visited friends and sometimes rounded off the day with a visit to the theatre. Märta Helena Reenstierna’s diary provides a good insight into Stockholm entertainment, fashion, and the political events of the turn of the eighteenth century.

Märta Helena Reenstierna’s husband died in January 1811. He was buried at Brännkyrka church with great sorrow. Their son, Hans Abraham, had been encouraged to seek release from his military service due to disorderly behaviour. He had fallen into debt, been drunk, been arrested, and left a maid pregnant. Hans Abraham was brought home to Årsta and increasingly involved himself in running the estate. In November 1812 Märta Helena Reenstierna received “the worst news I have ever been given, that my only son’s short life came to an end at the bottom of the lake where he spent the night”. Hans Abraham had ventured out onto the frozen Årsta bay where the ice had given way beneath him and he had drowned. This was a genuine tragedy. Märta Helena Reenstierna lost both her husband and only son within the space of a year. She lived on, a childless widow, until 1841 and continued keeping her diary almost as long, until November 1839.

A descendant of Märta Helena Reenstierna donated her diaries to Nordiska museet in the 1940s. Extracts from the diaries were published by Sigurd Erixon, Arvid Stålhane and Sigurd Wallin in three beautiful and richly illustrated volumes entitled Årstadagboken Del I-III, published between 1964–1953. The life and deeds of Märta Helena Reenstierna became well-known through these volumes. However, it was not until 2008 that her face was revealed to the public: a ring bearing her portrait in miniature, painted in 1796 and originally a gift for her husband, was discovered at Uppsala Auktionskammare (auctioneers). 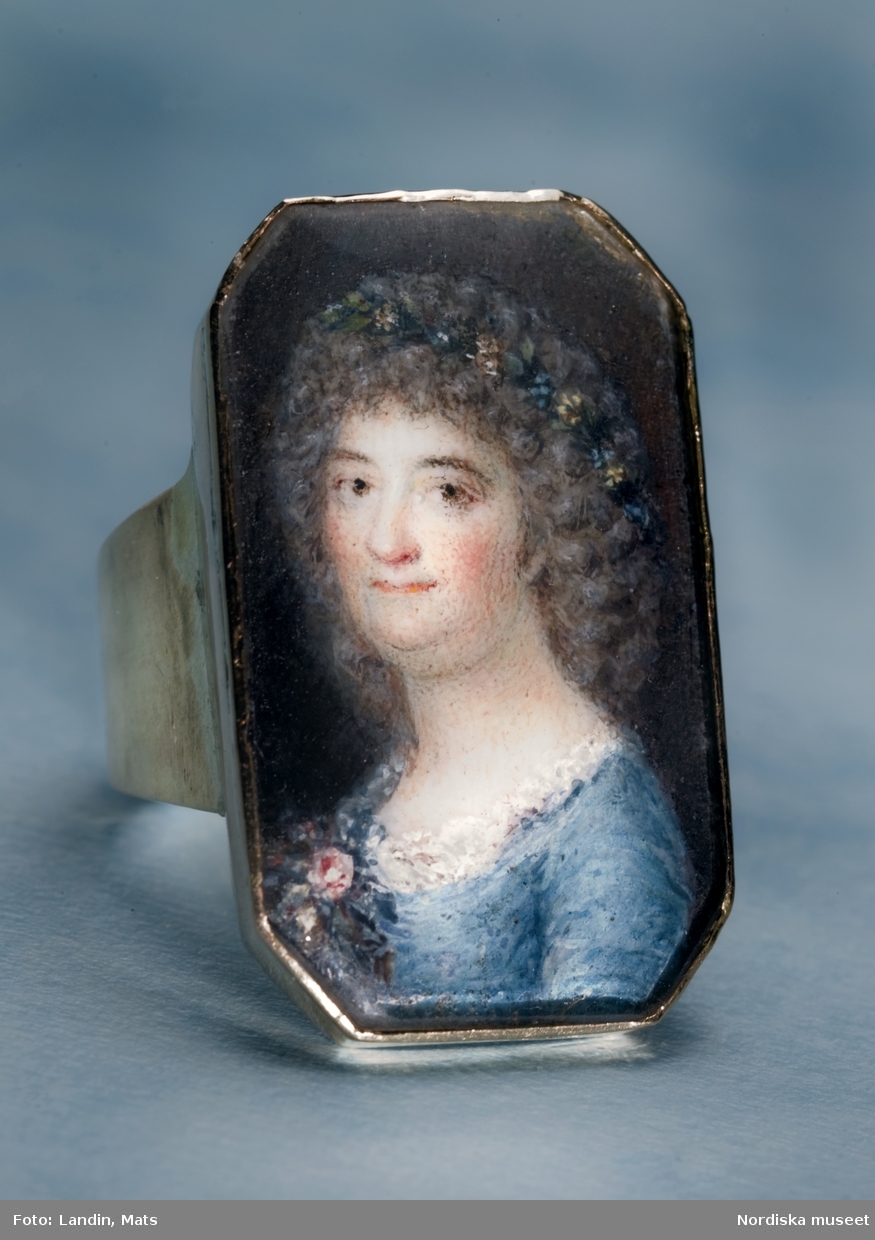