Marthe Bohm was a versatile artist who worked mainly in Hudiksvall.

Marthe Bohm was born in 1898 in Varnsdorf in the northernmost region of Bohemia, then part of the Austro-Hungarian Empire. The city had an important textile industry and it was there that her father, Franz Kieseberg, worked as the equivalent of today’s textile designer. Four sisters grew up in the family and of them, Marthe Bohm was considered to be the one who had inherited their father’s artistic skills, which is why she was allowed to study art. The family spoke German and belonged to the old Catholic faith that had broken with the contemporary Catholic Church. Franz Kieseberg died in 1919 from the Spanish flu. Their mother, Adele Kieseberg, had a good head for business and opened a stationery shop on the ground floor of the family’s house.

Marthe Bohm received her first artistic training at the local arts and crafts school in Varnsdorf. When she was 23 years old, she moved to Dresden where she trained in 1921–1927 at the Akademie der Bildenden Künste Dresden (now Hochshule für Bildende Künste Dresden, HfBK). When she had been there for two years, the Swede Gösta Bohm arrived to attend the same school. They became a couple, married in 1927 and moved to his home town Hudiksvall the same year. Apart from six months in Stockholm and a year in Germany, the Bohm couple remained faithful to Hudiksvall for the rest of their lives. They made their livings as artists, painted pictures and undertook public embellishment assignments.

During her studies in the 1920s, Marthe Bohm had encountered “the new objectivity” that greatly influenced her style of painting from then on. She painted portraits, landscapes and still life. During the 1940s, she started painting in one of the many varieties of cubist style. The motifs she chose for this abstract painting were preferably still life and landscapes. They were often taken from the couple’s many journeys during the 1950s and 1960s in Spain, France, Italy and Greece. Her warm religiosity was mirrored in some of her work, in which the religious aspect was included in an everyday context.

When she was young in Varnsdorf, Marthe Bohm had designed textile patterns. She was later to work to some extent with advertising illustrations, in both Germany and Sweden. She also designed congratulatory texts for miniatures in an almost medieval style.

Marthe Bohm exhibited her art in Sweden as early as 1927, first in Gävle and the year after in Hudiksvall. There were later to be many exhibitions in the county of Gävleborg, sometimes with her husband, sometimes separately. She also had her own exhibitions in Ljusdal, Bollnäs, Söderhamn and Gävle. She participated in group exhibitions in Stockholm, Helsingborg, Gothenburg, Malmö, Oslo, Halmstad, Sandviken, Falun, Agrigento, Paris and Monaco.

As a wife, mother and hostess, Marthe Bohm did not have the same opportunities to work on her art as her husband did. She was in that sense overshadowed by him. After their daughter had grown up, however, new opportunities developed for the Bohm couple to share a more equal life as artists. 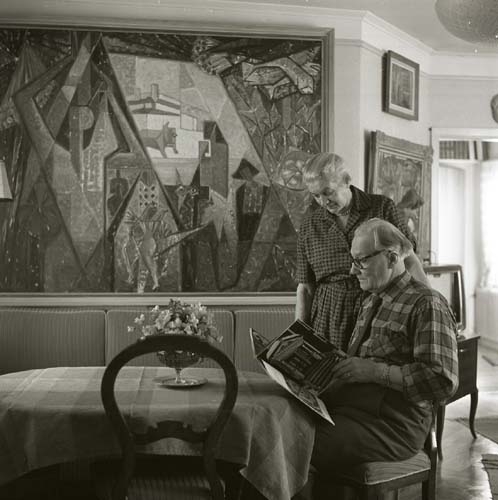