Mathilda Drangel was a highly productive translator who was active during the first half of the 20th centuy.

Mathilda Drangel was born in Nyköping in 1847. She was the daughter of Gustaf Mauritz Lundqvist, a provincial doctor, and his houskeeper Catharina Charlotta Rydström. After attending Ida Hesselgren’s school Mathilda Drangel worked as a teacher, mainly at Henriette Löwen’s public junior school, and then later at Nyköping Elementarskola för flickor. She gave up teaching in 1877 when she married Carl Otto August Drangel. The couple settled at the husband’s family property of Herrstorp in Perlarne parish. During the period of 1879-1882 she gave birth to two daughters and a son. Mathilda Drangel tried to publish some stories she had written but only had limited success. Instead, like her brother Ernst Lundqvist, she became an exceptionally productive translator. During the first two and a half decades of the 20th century Mathilda Drangel translated around 150 separate works.

In the main these works consisted of fictional literature. Most of Mathilda Drangel’s translations had been authored by Jack London. She translated about 20 of his publications in total. Some other authors she frequently translated included W. Heimburg (a pseudonym for Berta Behrens), who was a very popular romantic author in Germany, the American A.C. Gunter, and the Dane Christopher Boeck. Other authors whose work she translated who are better known today include Guy de Maupassant and Émile Zola, as well as Anton Chekhov and Lev Tolstoy – presumably via the French language.

Mathilda Drangel’s most important contribution as a translator was her work on Jack London’s books. Mathilda Drangel gained no particular fame when Bohlin & Co. publishers launched the author in Sweden as her name was merely noted as “M. Drangel”. This was possibly because the publishers did not want it known that the translator was a woman given that Jack London was connected to Darwinist thought and knew powerful individuals in exotic locations. However, in 1916 it became public knowledge that “M. Drangel” was a woman after several of her translations had been severely criticised by the press. She felt pressured into publishing a letter in her own defence in Svenska Dagbladet in which she not only revealed that she was a woman but that she had found it inappropriate to translate London’s baser and more vernacular form of expression into Swedish. Both these circumstances – the corps of misogynistic critics and Mathilda Drangel’s own prim censure of London’s language – became her downfall. She soon stopped translating London’s books.

Mathilda Drangel worked at an exceedingly rapid rate of production which was driven by her troubled financial circumstances, as revealed by her correspondence with the publishers. Her comprehensive output was also facilitated by the time’s low demand for the textual quality of popular literature. It seems that the pressure of deadlines often lay behind error-prone editing. Sometimes idiomatic usage in German and English defeated her. Mathilda Drangel tended to simplify the syntax by shortening sentences and paragraphs. This was combined with a tendency to neutralise any stylistic distractions as happened, for example, with the much-criticised translations of slang language, as well as a tendency to redact descriptions of social misery or violence.

Mathilda Drangel was in many ways a typical female translator of her time: under financial pressure, left to work on mass-produced literary fiction, sometimes ridiculed, and, geographically speaking, simply working on the periphery of the cultural world. 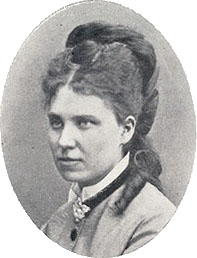