Mathilda Naumann was one of the most well-known women in Lund during the nineteenth century. She wrote using the pseudonym of Sorella and she was also active within the social spheres of Lund university as well as within the town’s poor relief efforts.

Mathilda Naumann was born Sofia Mathilda Jönsson in Lund in 1827. Her mother, Maria Elisabeth née Backman, was a farmer’s daughter. Her father, Nils Jönsson, was a saddle-maker in Lund. When she was 21 years old Mathilda married a relative named Carl Fredrik Naumann who was 11 years her senior. He too hailed from an agricultural background. He was a doctor, a professor of anatomy, and rector of Lund university from 1860–1861. The couple never had children. They resided at Stora Tomegatan 16 in Lund.

Mathilda Naumann has been described as a well-loved socialite who was beautiful, lovable, and intellectually gifted and who provided the driving force within a literary-musical society. She enjoyed riding and is said to have been the first woman in Lund to appear dressed in long trousers and smoking a cigar. Indeed, she was one of the few women who dedicated herself to literary writing. One of her close friends was Ida Nilsson, the daughter of Professor Sven Nilsson. Their friendship unfolds in their correspondence in which Mathilda Naumann signed herself as “Mante” whilst Ida signed herself as “Fairy”. Ida Nilsson also corresponded with Fredrika Bremer.

Mathilda Naumann undertook voluntary charitable efforts in Lund. Fruntimmersdirektionen of the Lund charity school and Fruntimmersföreningen (Lund women’s society) merged at a time when Mathilda Naumann was serving as secretary in both organisations. She was the chair of Fruntimmersföreningen, an organisation set up to assist poor children and their parents partly through the establishment of a junior school where children were taught to be God-fearing, well-behaved, and decent. During a period of high unemployment towards the end of the 1860s Mathilda Naumann set up a soup-kitchen, an employment office, and a workhouse where women were paid to sew shirts for retail. For middle-class women who lacked educational qualifications and were legally still minors charitable work and joining associations formed socially acceptable and meaningful past-times which enabled them to be active outside the home, and as such served as a form of emancipation.

Mathilda Naumann’s first collection of short stories, entitled Ur granskapets krönika. Teckningar af Sorella, was published by the Lars Johan Hierta publishing house in 1872. The pseudonym of Sorella, which she used for this and later works, is the Italian word for sister. Nine years later, in 1881, her debut work was followed up by Nya blad ur granskapets krönika. Some of her short stories were published in the Sydsvenska Dagbladet newspaper and the Tidskrift för hemmet magazine. Both of her published collections were favourably reviewed in the local and national press. The titles of her works bring Fredrika Bremer to mind, who had already published Teckningar utur hvardagslifvet during the 1828–1831 period and Nya teckningar ur hvardagslifvet, between 1834–1848.

The author’s alter ego, an older and unmarried woman, invites a fictional listener to her home in Lund, referred to as “the little town”. In the first short-story collection this narrator depicts her home on a small street, thrown into shade by ancient tall maple trees full of chirping flocks of birds and flushed by cool breezes. The closing story of Nya blad ur granskapets krönika regretfully notes that these looming maples have succumbed to the hands of lumberjacks. In some stories the all-knowing narrator voice takes the form of a moonbeam, a gust of wind, or an item of clothing. Thus she portrays the destinies of people from a range of social strata. Primarily the stories concern family relations, social relations, and sexual relations. Themes of love, death, good and evil, and superficiality versus sincerity abound and the stories tend to be presented from a woman’s perspective. For example, one story tells of a girl who is not considered pretty enough to get married and is thus advised to become a teacher. The narrator does not like the word “qvinnlig” (womanly) which at that time was synonymous with “noble, gentle, wistful, and self-sacrificing”. The criticism applied to self-important men is notable. At the same time, it is apparent that the woman’s sphere is defined by the home.

The narrator’s reflections do not consider the laws which applied to women at that time, such as that from 1858 onwards unmarried women could seek to become legally independent from the age of 25 and that from 1870 onwards girls had the right to sit the school-leaving exam. Similarly, the short-story collection published in 1881 seems completely uninfluenced by the radical literary trends of that time.

Mathilda Naumann died in 1889, aged 62. She is buried next to her husband at Östra kyrkogården (the Eastern Cemetery) in Lund. The year after her death, at the Nordisk fest för fädrens minne event, Mathilda Naumann’s name was inscribed on one of the standing stones raised in memory of significant individuals. At the time this was an unusual honour to bestow upon a woman. 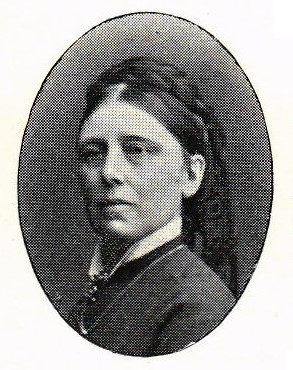