Mathilde Wigert-Österlund was an artist and an author who was mostly active in Uppsala.

Mathilde Wigert-Österlund was born in 1873. She was the daughter of Oscar Wigert, a school lecturer, and Inèz Wigert née Backman. Her father gained a doctorate in modern languages at Uppsala university and then became a school teacher in Jönköping and Norrköping. Oscar Wigert’s main employment was at Norrmalms Högre latinläroverk in Stockholm. Wigert published his doctorate and several French-language textbooks. His wife, Inèz Backman, who was half French, began to train as a telegraph operator, a profession which frequently attracted women. She also worked as a teacher in Norrköping and Stockholm and taught French and translated from French into Swedish. In addition to all this she also began to write shorter literary pieces which were published in newspapers and almanacs.

Mathilde Wigert-Österlund met fellow artist John Österlund during her student years and the couple married in 1906. In what was the norm at the time during the early years of the twentieth century she and her artist friends travelled to Paris, Berlin, London, the Netherlands, and Belgium in order to study and practise painting. During 1908 and 1909 the Österlund couple, along with other artists like the Uppsala painter Gusten Widerbäck, displayed their work at exhibitions held in Stockholm, Uppsala, and Gothenburg. Mathilde Wigert-Österlund and her husband had moved to Uppsala in 1908, where they lived at Bruno Liljefors’ studio in Kvarnbo. They were not happy there and the following year they moved into ‘kavaljersflygeln’ at Marielund farm in Funbo, just outside of Uppsala.

From 1910 onwards Mathilde Wigert-Österlund was an active board member of the female artists’ association Föreningen Svenska konstnärinnor. When she and her husband moved to a house on Geijersgatan 18 in Uppsala in 1915 they became focal figures of the town’s artistic sphere. They hosted artists and academics, including August Hahr and Ragnar Josephson, at their home and became part of what could be termed Uppland’s ‘golden age’ of visual art. They also held exhibitions within their home. The couple also displayed their work at exhibitions held in Uppsala, Stockholm, and Visby.

Mathilde Wigert-Österlund’s husband, originally a visual artist, came to focus increasingly on conservation work involving medieval churches of Uppland and Gotland, according to the new principles introduced by Sigurd Curman. Through Österlund’s work on Gotland churches the couple often ended up spending time on the island resulting in the use of Gotland motifs in their own artwork.

Mathilde Wigert-Österlund’s life was permanently overshadowed by the effects of a childhood experience. In 1885, shortly after moving to Stockholm in 1885, she along with her mother and a maternal aunt witnessed Christina Nilsson singing from a balcony at the Grand Hotell. A large crowd of 50,000 had gathered to watch the performance and in the ensuing tumult eighteen people were trampled to death. This traumatic event had lifelong consequences for Mathilde Wigert-Österlund who subsequently developed a severe case of thanatophobia, eventually taking the form of a psychiatric disorder. In the early 1920s the disorder began to take over her life, leading to various periods of institutional confinement. She spent periods of time at Ulleråkers sjukhus where she was diagnosed as suffering from schizophrenia. It was following the death of her mother, in 1921, that her illness first became apparent.

Mathilde Wigert-Österlund continued to exhibit her art throughout the 1920s, regardless of her periods of mental ill health. Her biggest solo display was held at the well-reputed Gummesons art gallery in Stockholm in 1928 which included around 40 of her works. Initially her paintings reflected traits of the contemporary National Romantic trend, using a subdued colour-scheme to create evocative atmospheric images. Her unusual choice of motifs often involved buildings and work sites which were crudely depicted. Over time her art came to increasingly take on a lighter impressionist use of colour.

During her periods of illness Mathilde Wigert-Österlund stopped painting, taking up writing instead, producing books which she published through her own publishing company. Her 1926 book Vox opens with a monologue with death and ends with a series of petitions addressed to the Swedish king and government seeking improvements in the conditions endured by those suffering psychological illness and improved hospital environments. Two parts of what are termed linked short stories, entitled Vår herres dårar, were published during the 1930–1931 period. Her form of literary expression was uncompromising and heavily serious. These works were distributed amongst her social circle.

Mathilde Wigert-Österlund’s mental health crises led to new internal developments which then influenced her choice of artistic motifs. The Bible and sacred environments began to characterise her work which took on a more visionary form of expression. Mathilde Wigert-Österlund’s art became increasingly expressive and emotional. There was also a practical explanation for these changes, as she was not allowed her oil paints during her deepest periods of illness spent in institutional facilities. She was allowed water colours but she chose instead to devote herself to other materials, tearing up cloths, silks, velvet, and lace to create fragile grid- and lattice-shaped coloured mosaics decorated with glass beads and buttons.

Mathilde Wigert-Österlund’s best-known work from her later period was an appliqué tapestry called Den svarta kalken which she donated to Uppsala Cathedral in 1931. Gunilla Lindberg, a resident of Uppsala, who was the daughter of the cathedral’s chief bell-ringer, remembers often bumping into Mathilde Wigert-Österlund close to the church. The artist pointed out the tapestry, hanging on one of the sacristy walls, to the young Lindberg explaining that the pearls represented tears. It truly was the black chalice of pain. Mathilde Wigert-Österlund’s later periods of illness led her to produce paper collages made using paper doilies, pages from the Bible, and fruit-covers.

Leif Nylén wrote about the work she produced during her bouts of illness for the Arbetarbladet newspaper in 1962: “A mental health crisis led the aging female artist to take up new creative methods, new experiences demanded completely new forms of expression. Often using pages from the Bible as her background she painted, drew, cut out, tore and glued images onto them, transforming reality into patterns, producing a glimmering and shiny fragile coloured mosaic. Meanwhile she would place a splayed grid or lattice over the top of the page, like a grate locking her out of the mysteriously appealing world.”

Mathilde Wigert-Österlund died in the spring of 1943 and is buried beside her husband in Uppsala Old cemetery. 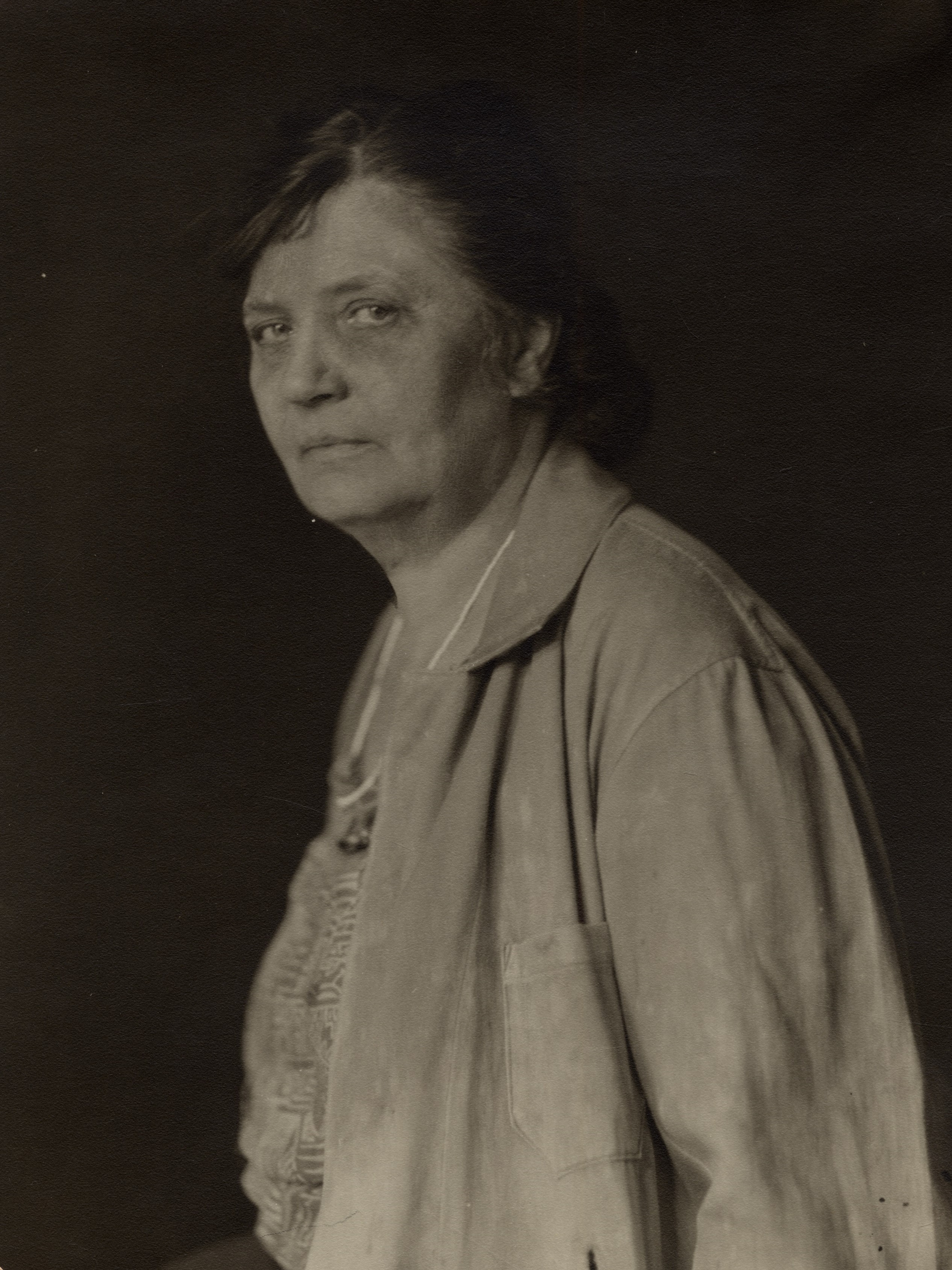