Mina Carlson-Bredberg was an artist who was active during the decades around 1900.

Mina Carlson-Bredberg was born in Gothenburg in 1857. Her family was otherwise well rooted in wealthy circles in Stockholm. Her father Henrik Vilhelm Bredberg was a judge in the Court of Appeal and her mother Josefina Lovisa, née Smerling, was the daughter of a wholesale businessman. Her maternal grandmother was the sister of the well-known publicist Lars Johan Hierta. The family had an active interest in literature, architecture and culture generally. The architect Fredrik Wilhelm Scholander, a friend of the family, is said concerning the young Mina Carlson-Bredberg “to have opened her eyes to the beautiful in life”. He advised her to take lessons in painting for Kerstin Cardon. Mina Carlson-Bredberg later continued to paint for Amanda Sidwall, who has moreover painted a portrait of her 19-year-old pupil.

Mina Carlson-Bredberg’s painting studies were interrupted in 1877 when she entered into marriage with a friend of the family, Vilhelm Swalin, a historian. The marriage was dissolved however seven years later, and by then Mina Carlson-Bredberg was already in Paris, where she had been introduced at the Académie Julian by Amanda Sidwall. It was mainly the schools of painting Académie Julian and Académie Colarossi that attracted the young, hungry women painters who poured into Paris at the end of the 1800s. When the demand had increased, these schools had opened so-called ladies’ ateliers. At the end of the 1880s, at least 50 women art students from the Nordic countries are estimated to have been in Paris. Mina Carlson-Bredberg studied there in 1883–1888 for Jules Lefebvre and Gustave Boulanger, and in 1888–1889 for Charles Émile Auguste Durand (known as Carolus-Duran) and Jean-Joseph Benjamin Constant. Mina Carlson-Bredberg’s goal was to have her work accepted by the annual Paris salon, which was also the case in 1887.

Mina Carlson-Bredberg’s painting Académie Julian med mademoiselle Beson som dricker ur sitt glas, in 1884, shows a cluttered interior from her study period. Three women are sitting spread out among pictures on display of models and a skeleton, between easels and a mirror. One is seen to be pouring out something, one is drinking from her glass and one is about to take a taste from a bowl of barely visible soup. Their clothes create a tricolour. The impression is lively, slightly humorous. The three are taking a break in the midst of their hard work, in obviously humble conditions. These women were able to live in a much more relaxed way in Paris than in their home countries, but were still limited. Male company was required for walking out in the city or eating at a restaurant. This painting mirrors this aspect as well as the important collegial contacts and sometimes lifelong friendships that were forged across national borders. Among Mina Carlson-Bredberg’s Parisian friends were the Swedish Elisabeth Keyser and the successful German-Swiss Louise Catherine Breslau.

In concentrated attention at her easel stands Mina Carlson-Bredberg, 29 years old. This self-portrait from 1886 captures the situation and the person, both very alive. She meets the viewer, or herself, with subtle curiosity, self-aware and expectant. The light touches her right cheek, neck and her slightly unruly hair, cautiously, and she stands out distinctly against the light wall behind her. In a grey painter’s shirt, she stands in a certain contrast to the stricter elements of the picture – like the row of Parisian chimneys seen through a window. Her right hand holding a fine paintbrush is seen to be aimed at the outer lower corner of the white canvas. Her left hand is at the same time hidden under a dark brown and surprisingly round palette on which red and blue dollops of paint gleam, like small half-secret explosions.

This portrait was purchased for Prins Eugen’s Waldemarsudde at the beginning of the 1970s and is probably the most known work of Mina Carlson-Bredberg, shown in among others the significant exhibition De drogo till Paris – Nordiska konstnärinnor på 1880-talet at the Liljevalchs konsthall on 1988. It is one of the many pictures that women artists of the period painted of themselves and each other, often in the atelier setting, pictures that manifest a new professional identity, friendly collegiality and the new access to a room of one’s own. However, her great breakthrough came with another self-portrait, that received an honourable mention at the great World Exhibition in Paris in 1889.

In 1890, Mina Carlson-Bredberg left Paris and returned to Sweden, but made a number of study trips the following years to Italy, England, Holland, Belgium, Germany and Austria. In France, she got to know Lewis Foreman Day, engaged in the Arts and Crafts movement. She visited him and his wife repeatedly in London and through them also came in contact with William Morris and Walter Crane. She herself considered as significant her meeting with English impressionism and James McNeill Whistler’s painting.

In 1893–1895, Mina Calson-Bredberg taught at Elisabeth Keyser’s school of painting. Mina Carlson-Bredberg’s own painting was also intensified during these years, as in a beautiful portrait of Elisabeth Keyser in a pink dress against a green background. It is now in the collections of the Nationalmuseum in Stockholm. She also did a number of historical depictions of Queen Kristina as a child.

In 1895, Mina Carlson-Bredberg married Georg Carlson, an official, and they had one son. Family and county duties limited her professional opportunities but Mina Carlson-Bredberg kept up her artistic work and made use of moments and motifs in her surroundings. They might be father and son, or the friends and children in their circle of acquaintances, as well as city views, landscapes and flowers. She worked in oils, pastels, watercolours and pencil. Her early low-key style with its emphasis on form gradually took on more impulses from impressionism, developing into a looser, freer, and, as years passed, ever more personal, colourful and expressive style.

The opportunities to participate in exhibitions were extremely few for women artists at the beginnings of the 1900s, and in 1910, the women artists’ association Föreningen Svenska konstnärinnor was founded with the express assignment of improving the situation. Mina Carlson-Bredberg was one of the initiative-takers. For the association’s great debut exhibition at the Royal Swedish Academy of Fine Arts (a.k.a. Konstakademien) in 1911, she was responsible for the retrospective section. To Mina Carlson-Bredberg, the association meant an important, continuingly collegial place where she belonged, and she participated in its exhibitions in 1917 and 1927 (then with a retrospective section in her own room). Apart from that, she exhibited in Ett halvsekel som målarinna in 1920 and 1921 at the art dealer Sigge Björcks art shop on Strandvägen and in 1931 in Galleri Modern, both in Stockholm. In this exhibition she showed 152 works that were hung on two floors.

After her husband’s death in 1920, Mina Carlson-Bredberg was able to spend her time more whole-heartedly on her art. She travelled to London where she enjoyed copying selected Italian renaissance paintings. She was fascinated by floods in Paris and reproduced them in an expressive flow of elation. She continued to paint portraits and characteristic for them is her interest in the expressivity of the models’ eyes. She enjoyed depicting environments in Stockholm, such as city views, with small pen-and-ink studies from hospital settings, a walk on Djurgården or humbler houses on Kungsholmen. The last were emphasised in a broad exhibition at the Stockholm city museum in 1971. Mina Carlson-Bredberg has also participated in group exhibitions in Chicago, London and Vienna. She was represented in the exhibition Opponenterna at Nationalmuseum in 1945.

Mina Carlson-Bredberg painted her entire life and met new appreciation in her later years. One June day in 1943, she was washing her brushes after the day’s painting. Two days later, she died, at almost 86 years of age. She is buried in Norra begravningsplatsen (the Northern Cemetery) in Solna. 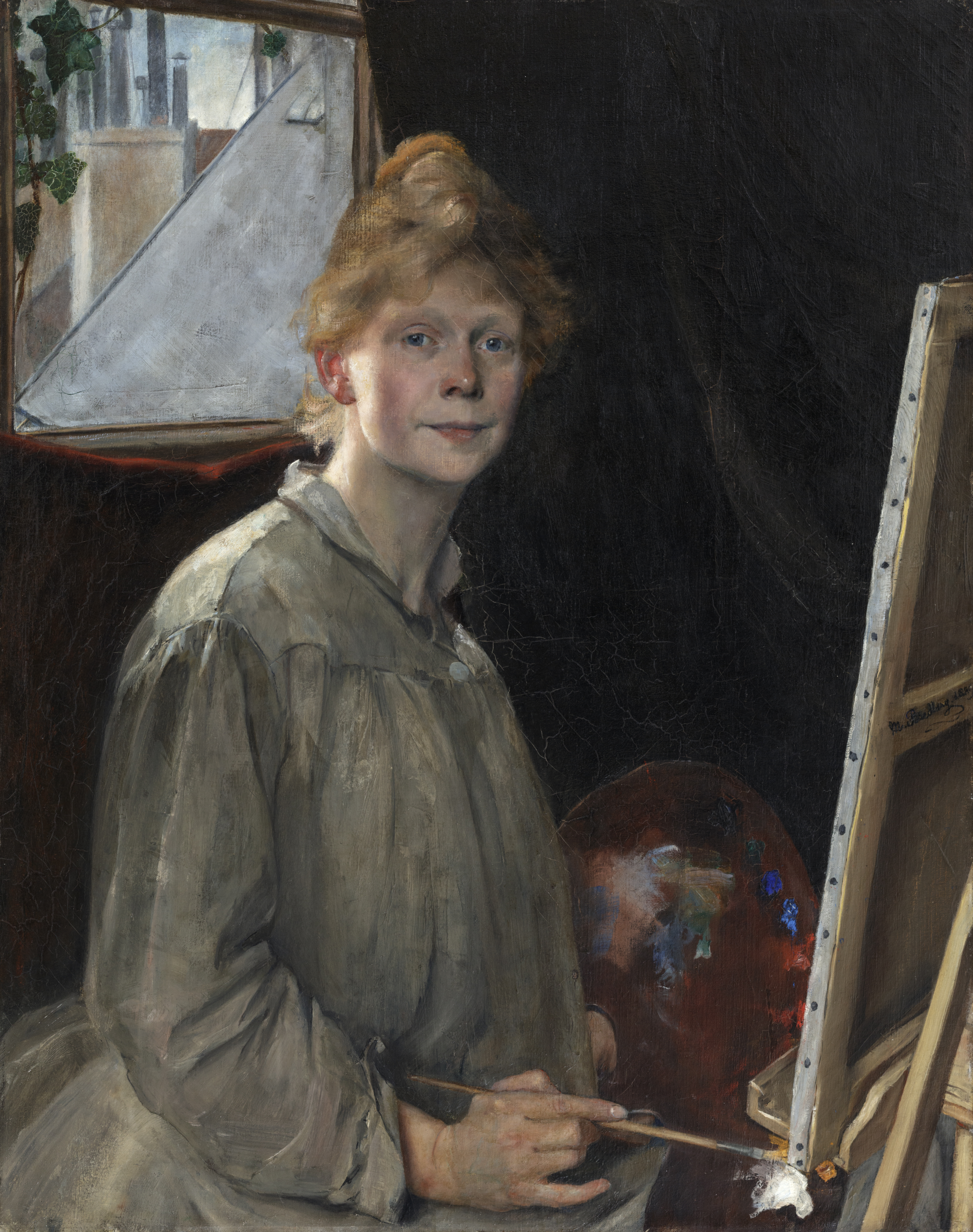