Mirjam Furuhjelm was a Finnish-Swedish physician and professor of gynaecology. She was the first woman in Sweden to take her doctorate and hold a lectureship in gynaecology and obstetrics.

Mirjam Furuhjelm studied medicine in Helsinki and took her licentiate in 1935. After that she moved to Sweden and gained her legitimation as a physician in 1936. Thereafter she started her career as a doctor in Lund. After some years, she moved to Stockholm and started working at the Karolinska Institutet. In 1940, she took her doctorate with the thesis On the excretion of oestrogenic and androgenic substances in the urine of women: An investigation covering fourteen healthy women, ten cases of myoma and two of castration. It was published in 1942 and was a pioneer work in the field of women’s sexual hormones – a subject to which she continued to dedicate herself during her entire scientific career.

That Mirjam Furuhjelm was one of very few women in a male-dominated profession was taken note of by her contemporaries. The major daily newspaper Dagens Nyheter reported from her gala dinner on 29 May 1942, after she had gained her doctorate, and Mirjam Furuhjelm, as the only woman doctor to be celebrated that evening made such an impression on the reporter Barbro Alving that she was the object of the newspaper heading’s subheading, which read: “Sweet doctor in white and hat received applause for curtsy”. Mirjam Furuhjelm had adopted the curtsy as a way to match her male colleagues’ bounding up the stairs to the ceremony, which was impossible in a long evening dress.

Mirjam Furuhjelm retained her pioneer status throughout her life. During the 1940s, she started her career at the Sabbatsberg hospital’s women’s clinic in Stockholm and in 1953 she was made acting consultant there. She was the first woman to hold such a senior post.

In March 1935, she married another physician, Gösta Rylander, in Helsinki. He was then the next senior physician at the psychiatric hospital in Stockholm. They had two children, Ragnar and Eva Rylander. After seven years of marriage, they divorced. In 1946, Mirjam Furuhjelm remarried in Stockholm, this time to Axel Ingelman-Sundberg who was also a doctor. She had a further three children in her second marriage: Henrik, Catharina and Magnus Ingelman-Sundberg.

Mirjam Furuhjelm’s professional life was intensive and she took turns between clinical work and research, lecturing and international cooperation. During her career, she published about one hundred articles and several popular scientific books. For example, she was responsible for the texts in the 1976 edition of the well-known book Ett barn blir till by Lennart Nilsson, in which colour photographs showed the human foetus’s different stages of development.

During her professional life, Mirjam Furuhjelm appeared in the daily press on matters to do with the menopause and menopausal symptoms. At the end of the 1980s, she published the book Äntligen Fri!, for the first time, in which she dealt with the challenges of the menopause and emphasised the importance of continuing to live and enjoy life even after the menopause. She was an active advocate of hormone treatment in connection with the menopause and was one of the first to show how important the ovaries’ hormone production was for women’s well-being. Prescribing hormones to women with the menopause was however controversial and was also questioned within the medical profession. The discussion on women’s well-being in connection with the menopause circled around several aspects like exercise, mental health, diet and treatments with medications. Like many other subjects that only touched women, there was very little research in the field. In this discussion, Mirjam Furuhjelm was strongly convinced that more research was needed, and that the research that had been carried out must be put to use: “We must not surrender ourselves to believing. We must know.”, as she expressed it, somewhat categorically, in an article in which she emphasised the chemical causes as to why hormone treatment during the menopause was a good thing.

Apart from innumerable journeys over the whole world for her work, she returned regularly to Italy. In the 1960s, she was a frequent visitor and scholarship-holder at Villa San Michele, Axel Munthe’s grand villa on the island of Capri outside Naples, where she wrote articles and books. Through her stays there and her contacts on Capri, she had the opportunity in the mid-1970s of purchasing a small house in Ana Capri. Thereafter she spent parts of the year there and was visited by family and friends.

Mirjam Furuhjelm is described by friends and colleagues as “the grand old lady of gynaecology”. In 1993, she was awarded the title of professor by the government, in recognition of her contributions to research and teaching. There was no question of retirement however, and Mirjam Furuhjelm continued with her clinical and research activities until her death.

Mirjam Furuhjelm died in 2003. She lies buried in the Galärvarvskyrkogården on Djurgården in Stockholm. 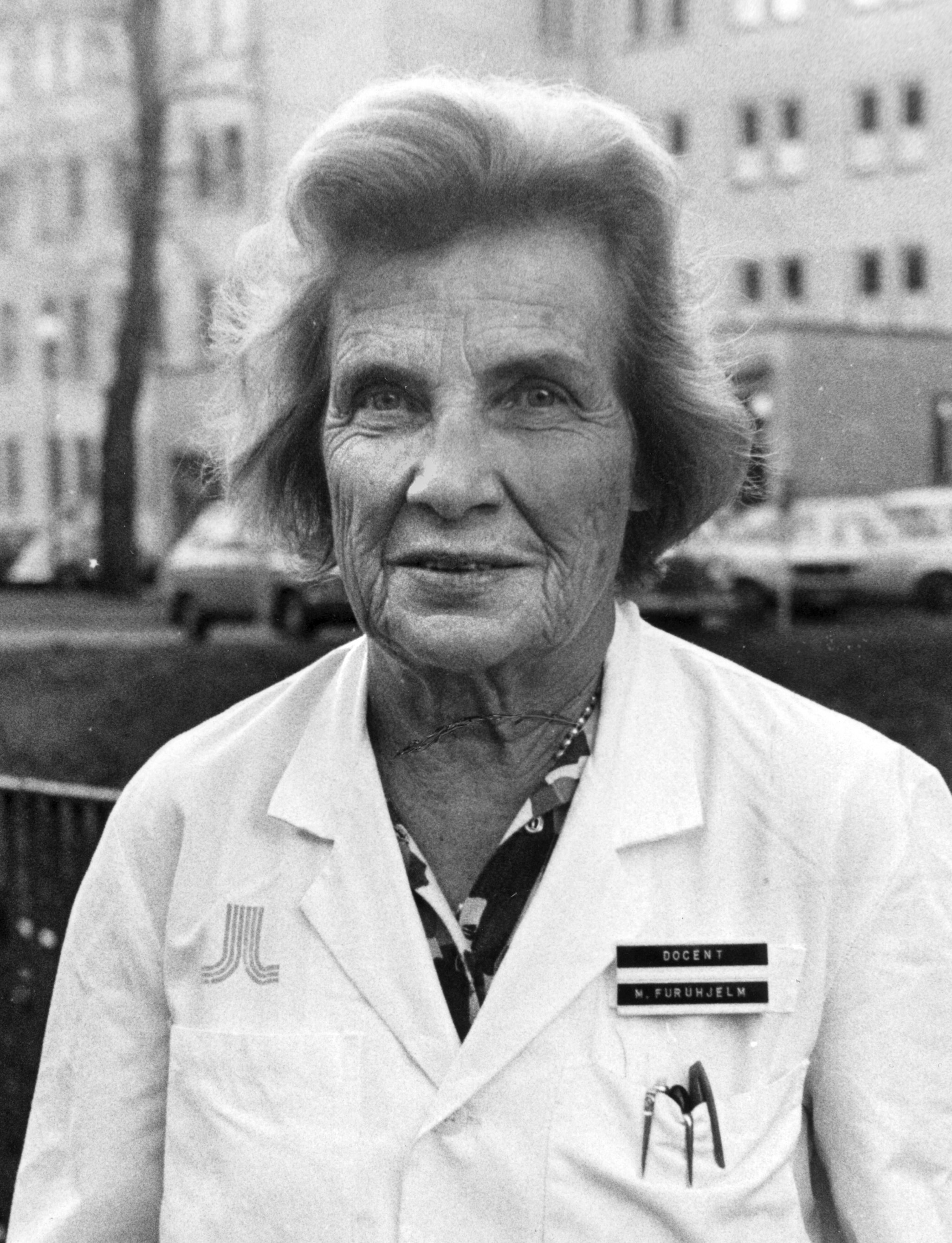