Monica Bratt was a Swedish artist and designer who is primarily associated with the glassware that she produced at Reijmyre glassworks.

Monica Bratt was born in Stockholm in 1913. She was the daughter of Percival Bratt, an actuary, and Eva Matilda Sprengel. She trained at the Otte Sköld school of painting during the 1932–1933 period and then, from 1933–1939, she attended the Royal Swedish Academy of Fine Arts in Stockholm. Whilst at the academy she also spent time in Paris during the winter of 1936–1937 and later she went on several study tours to France, England, and Italy. Her 1939 journey to Italy is considered to have been significant both in terms of her development as a painter and as a designer.

On the recommendation of her instructor Otte Sköld Monica Bratt was already employed as a designer at Reijmyre Glasbruk in 1937, whilst she was completing the final two years of her studies at the Royal Swedish Academy of Fine Arts in Stockholm. Reijmyre Glasbruk had just undergone a change of ownership and the management wanted to implement extensive changes across the production. One of the changes was to give the glassware produced a more artistic note by employing a new designer.

The decision to hire Monica Bratt was a controversial one as the majority of glassworks tended to employ more established artists and designers. Monica Bratt had, of course, been trained as a visual artist but she had no experience within the field of design. The recommendation her former instructor, Otte Sköld, had provided played a deciding role. Following a two-year employment period at Reijmyre Glasbruk Monica Bratt married Ebbe Wijkander in 1939. Despite raising a family and moving to Gothenburg Monica Bratt continued to be professionally active as a glass artist at Reijmyre Glasbruk.

Monica Bratt’s output is recognisable through her use of clean shapes which were based on the natural drop-shape formed by glass. Her designs also took inspiration from ceramic finds from ancient Egypt and Italy. Her 1939 trip to Italy was especially significant for her artistic development. She was drawn to the rustic shapes of the classical period – she strived to produce clean exteriors without decoration. Monica Bratt believed that colour should serve to emphasise the shape, and indeed it was her use of colour that came to be her trademark. Her functional models, which sometimes contravened the current reigning ideals of more decorated work, were produced in monochrome ruby-red and in emerald-green as well as Venetian blue tones. These colour tones gave even functional and robust items an exclusive aspect.

Monica Bratt never signed her glassware. She considered the process of design and production to be an important form of team work which she primarily undertok with the glass-blower and master at Reijmyre Glasbruk Harald Eriksson. As colour was dominant in her output the glass factory began to develop its production of coloured glass. Over time ruby-red glass became a very successful hallmark of Reijmyre Glasbruk.

Although Monica Bratt’s glass quickly came to be included amongst both Svenskt Tenn and Nordiska Kompaniet ranges it took many years before she became recognised as a designer by the wider public. Some claimed that she didn’t benefit from the same attention that was awarded to her male colleagues. This may have been due to the fact that she was carrying on an old handicraft tradition which perhaps did not generate much in the way of media interest. After 15 years as the leading glass artist at Reijmyre Glasbruk Monica Bratt was, however, awarded a solo exhibition at Nordiska Kompaniet in Stockholm in 1952. This was then followed by an exhibition at Röhsska museet in Gothenburg. Monica Bratt subsequently participated in a series of group exhibitions - themed on contemporary glass - in both a national as well as an international context.

Following 21 years of collaboration with Reijmyre Glasbruk Monica Bratt Wijkander gave up her job in 1958 due to illness. She died before her time in Gothenburg in 1961. She is buried at Kviberg cemetery in Gothenburg. 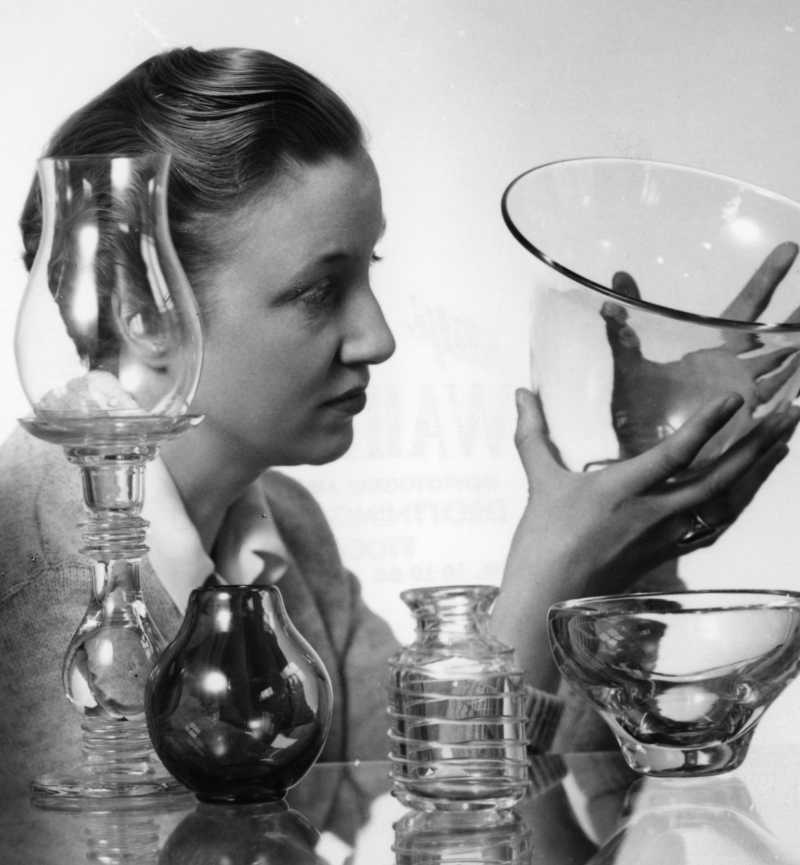