Nanny Palmkvist was an elementary school teacher, pedagogue and suffragette. She was also a pioneer for women’s use of bicycles as transport for longer stretches.

Nanny Palmkvist was born in August 1862 near Svalöv in the southern Swedish province of Skåne. She was the fourth child of Maria Olsdotter and Pål Persson Palmkvist (sometimes spelt Palmqvist), a miller. She was christened Johanna, but all her adult life she called herself Nanny.

Nanny Palmkvist trained first as an infant school teacher and worked in that capacity at Vadensjö, also in Skåne, at the beginning of the 1880s, where the family had then settled. She later trained as an elementary school teacher at the teacher training college in Kalmar, and started work in that capacity in Helsingborg in 1885. There she was employed at several different schools up until 1927.

Nanny Palmkvist was engaged in the votes for women movement for several decades, and she participated regularly in meetings and campaigns in many different places in southern Sweden. In 1894, she published the brochure Öppet bref till Sveriges kvinnor. Om behofvet av en allmän svensk kvinnoförening. In it, she pleaded firstly for the importance of giving the country’s women political voting rights; secondly, that women should have access to the whole employment market in the same way as men; and finally that women should have the same pay as men. She had to repeat the latter for many years, in various contexts. Among others was an instance in 1912 after a suggestion from the national salaries committee on elementary school teachers’ salaries (löneregleringskommitten) when she put forward this idea: “The only sensible basis for a salary system should be the principle: the same work, the same pay”. She also worked to encourage the country’s women teachers to organise themselves, and was included on the board for the women teachers’ meeting in Gothenburg in 1893. She was repeatedly one of the signatures on various forms of appeal and invitations to the meetings in question.

At the beginning of the 1890s, Nanny Palmkvist woke the attention of the whole country by undertaking, as a woman, a couple of extremely long-distance pioneer cycle rides. In 1891, she cycled from Helsingborg to Oslo and Trondheim in Norway, from where she continued to Östersund and Stockholm in Sweden and later back Helsingborg. The year after, she cycled from Helsingborg to Jönköping, where she participated in a women teachers’ meeting. A travel journal from this trip was published in the magazine Idun. Apart from the publications mentioned, Nanny Palmkvist also published a short novel in 1889: Testamentet. Svenskt original. Grundat på verkligheten, and the travel description Ensam till Städjan in 1892, both under the signature “Alf”. She also used this signature sometimes when she wrote in the daily press.

Apart from schoolteaching, Nanny Palmkvist was also involved in popular education. In 1891, she and her teacher colleague, the author Nils Krok started Helsingborg’s lecture association, the aim of which was “to enable the town’s craftsmen and labourers to acquire knowledge of useful subjects through the organisation of lectures”. In 1892, she and Mina (Wilhelmina) Hjertstrand opened Helsingborg’s reading room and boarding house “Tysta Maria”, sometimes called “Tysta Marie”, in an apartment close to the railway station and harbour. The reading room offered the opportunity of reading newspapers and books for a small charge (10 öre in 1894). The enterprise continued until 1915, at several different addresses. Nanny Palmkvist and Mina Hjertstrand continued to share a home until Mina Hjertstrand died in 1921.

Nanny Palmkvist was strongly engaged in the development of the teaching profession and in pedagogical issues, and in 1910 she published a brochure about the school of the future: Framtidens folkskola. In it, she argued for teaching based on children’s needs and individual abilities. Furthermore, she put forward the view that the school of the future must be secularised and that the state church’s influence over schools must be stopped. As early as in 1894, she had participated in debates and meetings about the fact that catechism-reading in school must stop. She also wanted to see that all teachers should have an academic education “instead of a dogmatic one”, and that the schools of the future should be completely coeducational, and that neither gender nor social class should play any part at all. This school form would be called a “basic school” (”bottenskola”) and the vision of implementing such a school was something for which Nanny Palmkvist continued to argue.

Nanny Palmkvist carried out a lecture tour in the USA in 1909–1911, during which she spoke alternately in Swedish and English on the subject “Sweden and its history”. She also showed slides of Swedish nature. The lectures were arranged with the aim of collecting money towards a home for elderly women teachers that she wanted to have built in Helsingborg. Her vision of a “study and recreation home” close to Öresund had been described by her in the magazine Dagny the previous year. She also sought knowledge about the American school system in order to be able to spread this knowledge later in Sweden. In the autumn of 1917, she carried out lectures in a large number of Swedish towns and villages on the subject “Elementary schools in the United States – a comparison with the Swedish ones”.

Nanny Palmkvist was fearless and sometimes made herself unpopular by getting involved in diverse controversies. In August 1897, she had been warned by the school council in Helsingborg for negligence of her duties at school and “failure to pay attention to current regulations after admonishment”. It was her frequent lecturing and the fact that she ran a boarding house that had nothing to do with her appointment that had led to the warning, as well as the fact that she was reported to have been absent and also to have organised a substitute off her own bat without permission. Nanny Palmkvist appealed to the Chapter, that upheld the school council’s decision, however. In 1904, Nanny Palmkvist applied to the school council to be freed from her duty to teach Christianity, with reference to her own religious point of view. The school council accepted that and Nanny Palmkvist was given permission to exchange her teaching hours in Christianity for other subjects.

In 1915, Nanny Palmkvist took charge of a foster child, two-year-old Maj Andersson, who was the daughter of an unmarried woman in Kalmar. After her retirement, Nanny Palmkvist acquired a farm in northern Skåne, that she named Högatoft. She was by then a convinced vegetarian and her aim was to offer accommodation to more vegetarians at the farm, and to keep animals in tune with nature. Economic difficulties arose that prevented her from retaining the farm. In 1933, it was sold at an executive auction and Nanny Palmkvist was evicted. Two years later, she published a pamphlet with the title Du skall icke begära din nästas hus! (“Thou shalt not covet thy neighbour’s house!”), in which she summarised her dealings with banks and the buyer of the farm.

After having lived in Helsingborg all her life, Nanny Palmkvist moved to Rolsberga in Gudmuntorp parish in mid-Skåne in the autumn of 1938, but she returned to Helsingborg where she was diagnosed with stomach cancer and died at the town’s home for the elderly on 10 April 1940, at 78 years of age. In an obituary in Helsingborgs Dagblad, she was described as an “in many ways original personality, full of impulses and ideas both with regard to her professional work and in other aspects”. Nanny Palmkvist was described in these words of remembrance as a pedagogical pioneer who did not always win understanding on those occasions she made her suggestions: “Fröken Palmkvist was an unremittingly active woman, who threw herself into one thing after another with obvious energy, but without there always being the expected results of her intensive desire for activity.”

Nanny Palmkvist had been a promoter of cremation and her funeral was held at the Helsingborg crematorium. She was buried in Landskrona, where her parents are also buried. 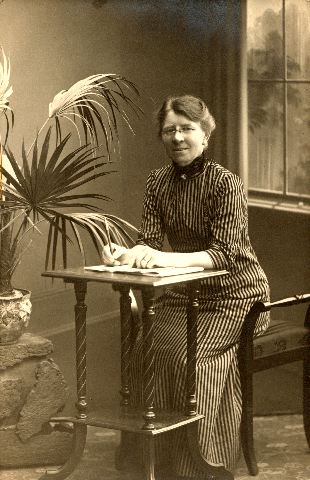