Olga Nyblom was a painter, an illustrator, and a textile artist known for her portraits and landscape paintings as well as her highly artistically valued flower still lifes.

Olga Nyblom was born in Gothenburg in 1872. She was the daughter of Carl Lundberg, a police superintendent, and his wife Johanna Lundberg (née Bergström).

Upon completing her schooling Olga Nyblom was, in 1893, accepted as a student at the art school Göteborgs Musei Rit- och Målarskola (later Konsthögskolan Valand/Akademin Valand at Gothenburg University). She thus formed part of the last corpus of students taught by the painter Carl Larsson, who was employed at the school during the 1890s. Under his guidance Olga Nyblom produced many painted studies until she, in 1896, took a one-year break from painting in order to go to North America. She then returned to Gothenburg and continued her studies at the art school, albeit now under instruction from the painters Georg Pauli and Carl Wilhelmson.

Olga Nyblom, like many other youth interested in art, did not settle and longed to experience the wider world in order to gain artistic exposure in the global metropolis of Paris, where she spent the winter. She then headed to Italy where she became acquainted with the sun, spring, and the Renaissance. In Florence she caught up with her friends from art school and she also met her future husband, Lennart Nyblom. The couple became engaged at Christmas 1898 and they married in 1900. Their first marital home was located just outside of Gothenburg, and their first child Staffan was born in 1901, followed by their second, Peder, in 1902. That year also saw the family move to Stockholm, where their new home, Villa Lido, lay near Djurgårdsbrunnskanalen, between the so-called Dragonlägret and the inn Djurgårdsbrunns Värdshus. Surrounded by natural beauty the couple set themselves to producing art through intensive and hard work. Fellow artist friends gathered at the Nyblom home, inspiring each other, discussing art, and enjoying the Nyblom couple’s generosity.

In 1903 and 1904 the Nyblom family welcomed two daughters, respectively named Helena and Maja. Their house was no longer suitable for the expanded family and the lack of modern conveniences made running the household unnecessarily cumbersome so a change was required.

In 1906 the family moved to a more modern home at Ängsvägen 24 in Storängen, Nacka, a building which had been designed by Ivar Callmander. Here the Nybloms finally set up a genuine artist’s studio, as well as a workshop for Lennart’s handicrafts. Over the ensuing years the couple produced portraits, pictures painted en plein air, still lifes, and magnificent works in enamel as well as the increasingly well-known Nyblom glassware, decoratively etched overlay glass, called cameo glass. Glass production became a small family business and, during the early years of the twentieth century, their products could be seen at markets and exhibitions. In 1908 a third daughter, Hilde, was born, followed in 1913 by a third son, Urban, increasing not only the joy but also the amount of work required within the home.

As before at Djurgården, the Nybloms socialised with their friends, holding cultural gatherings involving music, literature, and discussions about art. Olga Nyblom became a much-loved hostess, renowned for her charm, particularly as reflected in her conversations which revealed how well-read she was and the breadth of her general knowledge. In 1955 one of Olga Nyblom’s artist friends, Edward Berggren, wrote a tribute to his friend for the church magazine Credo: “She was deeply religious, and like her husband she had converted at an early point to the Catholic faith, which provided her with the key to a harmonious life. This sense of harmony exuded from her through her calm demeanour and seemed irresistible to those she met, as is often the case with strong personalities. Olga Nyblom was a unique individual.” Edward Berggren further commented about how her art was completely grounded in the academically traditional nature-inspired approach and that there was something a bit masculine about her style and manner. Her array of motifs was extensive. Her warm interest in people and sharp sense of observation meant that she was frequently called-upon to paint and much loved for her portraits. She was a highly productive artist.

Olga Nyblom was also talented in capturing the shifting atmospheres of landscapes. She used what at that time was an innovative process of combining charcoal drawings with gouache colours on specially-prepared paper to adapt her sketch-like paintings produced en plein air. This technique is still connected to the so-called Nyblom-panneau which has long been popular with and frequently used for sketching. Olga Nyblom made particularly successful use of colours in her beautiful paintings of flowers, which reflected “her both gentle yet powerful hand – producing sometimes playfully elegant results”, again according to Edward Berggren.

Olga Nyblom was also a successful textile artist. She, along with assistance from her daughter Helena, created, amongst other things, a beautiful banner for Auxilium Christianorum, the congregation at the Maria church. Helena also helped her father to produce his glass- and enamel-ware.

Further to her artistry, and her household and familial duties, Olga Nyblom also engaged with the congregational and associational spheres connected to the Catholic community in Stockholm. She served as ‘prefect’ for the aforenoted Maria church congregation, and she enthusiastically threw herself into church bazaars and congregational celebrations as well as the family association called Concordia Catholica.

Olga Nyblom’s work often appeared at group exhibitions, both in Sweden and further afield. In recognition of her artistry she was made a member of the professional organisation called Union Internationale des Beaux-Art et des Lettres. From 1921 to 1929 she served as editor of the fashion and handicrafts sections of two magazines, namely Husmodern and Vårt hem. In 1928 she published a pamphlet for Vårt hem containing suggested patterns and textile trademarks which became widely used within Swedish homes.

Olga Nyblom’s work can be seen at Stockholm National Museum and Konstmuseet Prins Eugens Waldermarsudde, amongst other places.

Olga Nyblom survived her husband Lennart by eight years. She died in Storängen in 1955, aged 82. Her remains lie at the family grave within the Catholic cemetery in Solna, Stockholm. 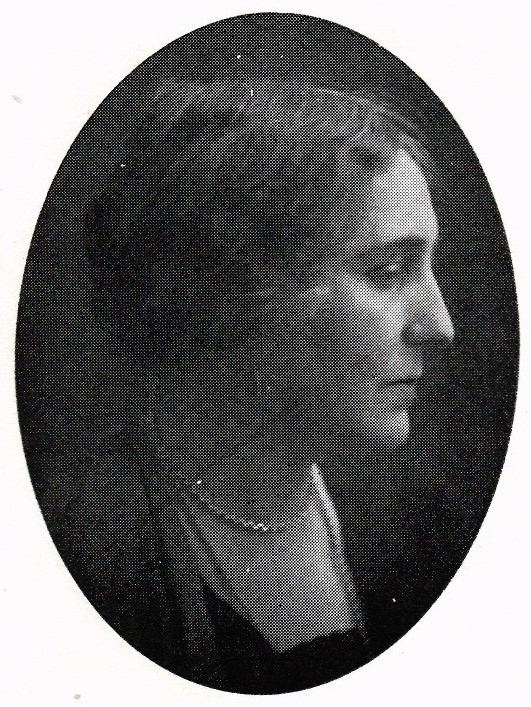