Olga Raphael Hallencreutz was active in several artistic fields as well as in charity organisations.

Olga Raphael Hallencreutz was born in 1887 in an environment steeped in culture and education. Her father Axel Raphael was a national economist and a politician in social politics and her mother was Cecilia, née Salomon. Her maternal grandfather was the artist Geskel Salomon who was very influential in her life. The family home was regularly visited by for example the actor Anders de Wahl and the authors Oscar Levertin and Verner von Heidenstam. Olga Raphael Hallencreutz became interested early on in the theatre but according to her memoirs, her parents were not positive to a theatre career for her. They asked Heidenstam to speak to her warningly about the reprehensibility of the theatre. She turned instead to the field of visual arts, and after preparatory studies at the art school Althins målarskola she was accepted in 1904 at the Royal Swedish Academy of Fine Arts (a.k.a. Konstakademien). Its courses were strictly divided according to gender, especially when it came to studying human models.

Her interest in the theatre did not however diminish but was reinforced even more by Olga Raphael Hallencreutz’ meeting with the director Gustaf “Muck” Linden at the Swedish Club in Berlin in 1910. She married him in 1912. However, before that she had completed a dance course for the pedagogue Anna Behle, who was a Swedish pioneer in free dance, trained at among others Isadora Duncan’s school in Berlin. Later, Olga Raphael Hallencreutz was to give lessons to the dancer Ronny Johansson who made a career in Europe.

Olga Raphael Hallencreutz’ knowledge and skills enabled her to gain her first role at Dramaten in Stockholm in 1911 as a dancer in Titus and she received positive attention from the critics. Her theatre education was taken care of by the actress Louise Fahlman and the teacher Signe Hebbe. After her training, she was engaged by Einar Fröberg’s company and performed in Malmö and Gothenburg. She was especially praised for her poetic interpretation of Puck in Shakespeare’s A Midsummer Night’s Dream. She was offered roles at Dramaten, and was to perform there in 1913–1917, among other roles as Ophelia in Karl Hedberg’s production of Hamlet. It was only when Olga Raphael Hallencreutz had started at the Lorensbergsteatern in Gothenburg, where her husband had been made theatre director, that the critics took note of her uniquely genuine tone in her role interpretations. She was also active as a costume designer and scenographer in several productions. After her guest appearance as Puck, she became an idol among the schoolgirls of Gothenburg, who followed her career onstage with great interest.

Gustaf “Muck” Linden’s time as the director of the Lorensbergsteatern turned out to be brief, and ended in the spring of 1919 after conflicts with the theatre board. From 1921, he returned to Dramaten as a producer. According to Olga Raphael Hallencreutz’ memoirs, she had promised upon their engagement that her career would take second place if her husband’s position at the theatre demanded that. She also took more and more responsibility for her husband’s theatre publishing company, which involved many contacts with authors. She found time for a few more roles however before her time as a professional actress ended, among others on a tour with the play Röda korssystern that led to her being given the main female role in Carl Th. Dreyer’s debut film Presidenten.

In 1931, she was a co-founder of the Jewish women’s club and was its first chairwoman, strongly involved in refugee aid. According to her memoirs, she apprehended an increasing antisemitism and lack of understanding for the Jewish refugees’ situation. This made her all the more strongly committed to the Mosaic Congregation. During her twenty years as chairwoman, the organisation’s social and cultural work developed positively.

She returned to the visual arts and received several important assignments, among others to do portraits for the anthologies Under Vintergatan: en samling svenska dikter, in 1933, and Konstnärsminnen, in 1941. She had several separate exhibitions, among others at Galleri Gummessons in Stockholm in 1935, in Gothenburg and Örebro in 1936, in Örnsköldsvik in 1950 and Kalmar in 1954. She received a number of commissions to paint and draw portraits and is represented at among others Nationalmuseum, Dramaten, Stockholm City Museum and the Gothenburg Art Museum.

When Olga Raphael Hallencreutz’ husband died in 1936, she was left alone in her responsibility for the theatre publishing company and did not return to the stage. In 1940, she married the decorative painter Gösta Hallencreutz whom she had already got to know in 1902 at Althins målarskola. Together they created several decorative works at restaurants in Stockholm.

In 1937, her collection of short stories Det hårda virket was published. It takes place during the Carolingian era and is based on thorough archival studies, although using a modern, living language. It was followed in 1943 by Öija bussar, a play for amateur production. In 1966, she published Släktklenoden, a depiction of Princess Wilhelmine Charlotte of Hessen.

To judge from her memoirs, Olga Raphael Hallencreutz experienced sadness over leaving the stage. To some degree, it was replaced by her engagement in innumerable charity organisations for which she arranged soirées and performances and even participated as a reciter at various events. One of the greatest was the Queens’ Festival Procession in 1933, a historical cavalcade of Swedish Queens in the Blå hallen at the Stockholm City Hall. The initiative-taker was Princess Ingrid and it was accomplished under the direction of Olga Raphael Hallencreutz, with her costumes and scenography, for the benefit of the Swedish association for the deaf. The performance was acclaimed by the press and was soon sold out and repeated a number of times. 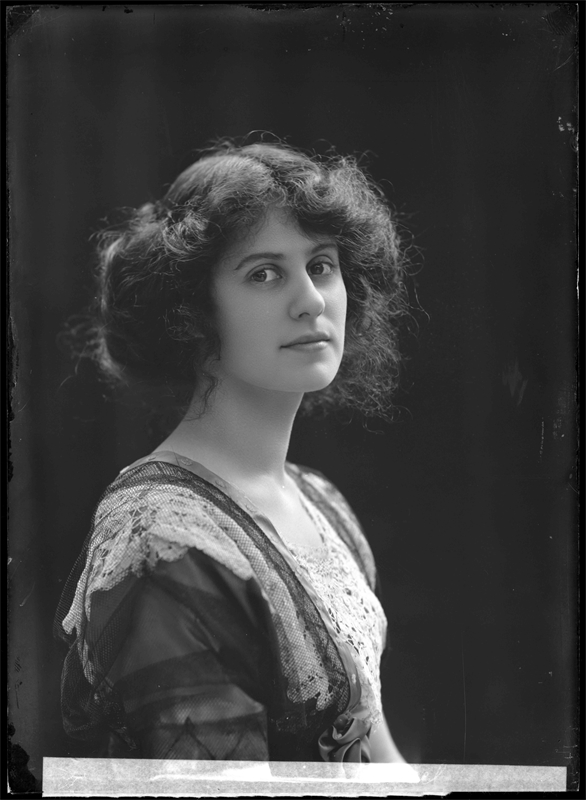