Rosalie Olivecrona was born in Stockholm in 1823. She grew up in a civil servant’s home. She had good access to books through her father’s well-supplied library. Both Aftonbladet and the works of C. J. L. Almqvist were read in her family home. By joining the first batch of girls to attend the Wallin school Rosalie Olivecrona supplemented what she had learned through self-directed learning.

In 1838 Rosalie Olivecrona and her family moved to the property of Sjögerås in Västergötland, at the foot of Mösseberg. At this point Rosalie Olivecrona became a teacher to her younger siblings. She picked up a good knowledge of botany from the forests and surrounding land, with the help of her father Gustaf Roos’ guidance. He was keen for his daughter to gain an education. Rosalie Olivecrona discovered the unfair discrepancies between the sexes at an early stage and this led her to develop a strong sense of justice.

During the late 1840s Rosalie Olivecrona embarked on a romantic relationship with her brother’s tutor, Pehr Gjer, and the couple became engaged. However, partly due to their different views on the women’s movement and partly due to her fiancé’s difficulty in finding permanent employment as an office worker, the engagement was broken off in 1851. This then led the disappointed Rosalie Olivecrona to make her way to the USA, the home of emancipation. Her friend, Hulda Hahr, had already gone to America with her brother in the spring of 1851 and had formed contacts which Rosalie Olivecrona could make use of. The Hahr siblings worked at a girls’ boarding school in the American south, teaching music and drawing. Rosalie Olivecrona also tried to earn a living as a teacher upon her arrival in North America in October 1851. In Charleston she got to know, amongst others, the Hammarsköld family, which had emigrated from Skultuna.

Rosalie Olivecrona taught French and music in Limestone, and she also worked as a governess at a plantation south of Charleston. Her earnings and experiences strengthened her resolve and facilitated her decision to end her time abroad by travelling to Cuba’s capital Havana in the spring of 1855, and then visiting New Orleans, Chicago and New York, followed by periods in Great Britain and Germany. She wrote home to her curious family – her father, in particular, was very interested in America. Rosalie Olivecrona’s great-grandchild, Sigrid Laurell, published these letters relatively recently, in 1969. Rosalie Olivecrona’s descriptions of her North American impressions provide an interesting parallel to Fredrika Bremer’s work Hemmen i den nya verlden, which she wrote after one of her visits to America a few years earlier.

When Rosalie Olivecrona returned to Sweden in 1855 her family had just left Västergötland and moved back to Stockholm, where her mother Ulrika von Keppel had inherited a plot of land. A stone building was under construction at Klarabergsgatan 21. It was not long before the well-travelled Rosalie Olivecrona met Sophie Adlersparre, a contemporary of hers, and they began to forge plans to further the women’s movement.

A career as a literary author had long lain in the waiting for Rosalie Olivecrona. She had already begun to publish poems and short stories in the 1840s in Göteborgs Handels- och Sjöfarts-Tidning, using the pseudonym of La Straniera. Her poetry collection entitled Skogsblommor was published in 1855 by the Arwidsson publishing house in Gothenburg as part of the series called Riksdalers-böcker för resor. Later on, through Norstedts Förlag, she published the Spridda blad poetry collection under her own name.

However, it was in her engagement as a socio-polemicist and campaigner for women’s rights that Rosalie Olivecrona made the greatest societal impact. When she wrote in the daily press about social issues she used a pseudonym. In 1859 she and Sophie Adlersparre jointly set up the Swedish women’s movement’s main journal Tidskrift för hemmet. Although she only remained its editor until 1868, she carried on writing for the journal after that and her contributions to the journal number in the hundreds.

Rosalie Olivecrona also took on other positions as women’s opportunities for public involvement expanded. She was placed in charge of the exhibition of women’s handicrafts at the 1873 Vienna World’s Fair, and she was given similar tasks at the Philadelphia, Paris, and Chicago World’s Fairs. Her remit included compiling the catalogue for the women’s section at the 1876 Philadelphia World’s Fair, in which she provided an inventory of current training institutions and the handicrafts and traditional skills which existed in Sweden.

Rosalie Olivecrona published a number of texts, which were often first printed in Tidskrift för hemmet. Many of them were subsequently published as individual pamphlets, such as the 1877 Bildningsanstalter och arbetsområden för den svenska qvinnan. That same year Rosalie Olivecrona published Mary Carpenter: hennes lefnad och verksamhet through the Torsten Hedlund publishing house in Gothenburg. This was also the year that the well-known social reformer and philanthropist passed away in England.

Rosalie Olivecrona’s posthumous papers include memoires from the period of 1894–1897. Her descendants did not publish them until 2005. In them we are confronted with an older, melancholic individual looking back at the challenges her life presented. For example, she discusses how difficult it was to fulfil the role of stepmother. She suffered deeply over the loss of her daughter Eliza, who trained as an artist in Paris and subsequently contracted tuberculosis. Eliza died just a few years after her mother.

Rosalie Olivecrona’s time in Uppsala was a defining period in terms of her involvement in the Swedish women’s movement. As Sophie Adlersparre, her editorial colleague, lived in Stockholm they maintained a steady correspondence which has proved of great use in research.

Rosalie Olivecrona died in the summer of 1898. She is buried at the old Uppsala cemetery. 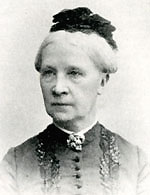