Rut Holm was a popular actor and comedian who was active on the stage, on the silver screen, and as a recording artist.

Rut Holm was the daughter of building contractor Anders Holm and his wife Matilda. Rut Holm was born in Avesta in 1900. She had two older sisters, Ester and Edith, who both died in childhood. Rut Holm also lost her father at an early age, as he died in 1905. Her mother then moved to Sala, remarried, and had a son with her new husband. Rut Holm began dreaming of the theatre as a young child and the woodshed served as her first ever stage. Her childhood in Sala was not just spent going to school but also practising the art of entertaining the public by performing for the Salvation Army, by singing and playing her guitar. When she was 17 years old she finally got to appear on a real stage when she performed as an extra in a production in Västerås.

Rut Holm was determined to get into the theatre and thus moved to Stockholm when she was 18. She lived off her earnings from working as a home-care assistant and as a waitress, amongst other things, whilst seeking to achieve her dream. The lack of contacts made things difficult for her but finally she succeeded and made her acting debut on a tour with Halvar Falck in 1924. She then performed with various touring ensembles throughout rural Sweden. Her stage debut occurred at Mosebacketeatern in 1926 where she had great success in Gideon Wahlberg’s burlesque entitled Skärgårdsflirt. She performed opposite one of the leading comedians of the time, Fridolf Rhudin. The play ran for more than 500 performances.

Rut Holm also appeared in many revue-shows. Her greatest critical success came from playing the old woman in “Katarinahissen”, a monologue written by Åke Söderblom and performed as part of Folkets hus revue show in 1935. Through the years Rut Holm performed at various indoor and outdoor stages in Stockholm, including Södra teatern, Folkteatern, Odéonteatern, Folkets hus teater, Oscarsteatern, Casinoteatern, and the open-air stages in Tantolunden and Vanadislunden. Further to that, she also worked at various theatres and with several touring revue-companies across Sweden, such as the Folkets hus revue, in the summer months when she was not performing at any of Stockholm’s outdoor theatres.

Some of her many theatre roles include “Felsteget” in Augustas lilla felsteg at Mosebacketeatern in 1931, Svea Lundkvist in En Söderpojke at the same theatre in 1933, and Lina in Här kommer jag at Folkets hus teater in 1933. She also played the part of Vivan, the maid, in another of Gideon Wahlberg’s folk plays Grabbarna i 57:an which premiered at Tantolunden open-air theatre in 1935.

Rut Holm made her silver screen debut in 1932 appearing in Weyler Hildebrand’s film adaptation of the play Söderkåkar. She played the role of young Malin who had moved to Söder from the countryside. During the 1930s and 1940s she was employed by Europafilm and appeared in a long series of popular films opposite the cream of popular comedians and best-loved entertainers of the era, such as Fridolf Rhudin, Edvard Persson, Dagmar Ebbesen, Elof Ahrle, Nils Lundell, Thor Modéen, Åke Söderblom, Julia Cæsar and Emil Fjellström. She also acted with Åke Grönberg, performing with him on stage, in films and recording albums. Their collaboration even extended into their personal lives and for a time they were man and wife.

Rut Holm’s specialism within the revue genre was her monologue delivery. Some of her most famous monologues include “Epatåget” and “Sveriges sista hembiträde”, which were also released on albums. She made her first record in 1934 called “Rut söker plats” and in total she recorded 27 records in the period between 1934 and 1945. These mainly contained sketches and monologues but also included some songs. Her career came to an abrupt halt during a 1960 Klanger revue tour following an accident on the tour bus which left her so severely injured that she became wheelchair-bound for the rest of her life.

Rut Holm was always typecast – from the very outset – as the home-help, the maid and the old woman, right through to the end of her career. On the silver screen she often portrayed folksy, simple but somewhat pushy and unusual women. Her niche role was the everyday maid who was sometimes a bit absent-minded, silly, or cunning. She could be a tease, slightly impertinent, bold and a witty country bumpkin. She could put both snobs and men in their places if required but always with a twinkle in her eye. She was considered to be more gentle than other shrews within the Swedish film industry at the time, given her less aggressive displays of anger and, depending on the situation, she could even bring herself to tears, become emotional or be romantic.

Rut Holm rarely performed serious roles although she occasionally appeared in dramatic films. For example, she played the part of the mother of Calle Jularbo, the king of the accordion, in the somewhat sugar-coated dramatization of his life from 1952 called Kalle Karlsson från Jularbo. They both hailed from the same area of Sweden, around Avesta in Dalarna.

Rut Holm's reputation was of an accomplished comedic character actor, due to her natural manner and her realistic role interpretations of both lovesick young maidens and of stubborn women who seldom left the domain of the kitchen. These character roles rarely commanded serious critical attention and tended not to be reported in the press or in historiographical accounts. Rut Holm nevertheless developed her own supporting role genre in which she shone. She was one of the great comedians of the 1930s and 1940s. She was a proper popular and well-liked star who specialised in revue shows and folk plays. She was sometimes referred to as the “female Fridolf Rhudin” and known as “All of Sweden’s Rut”.

Rut Holm died in Stockholm in 1971. She is buried at Hovdestadlund cemetery in Västerås. 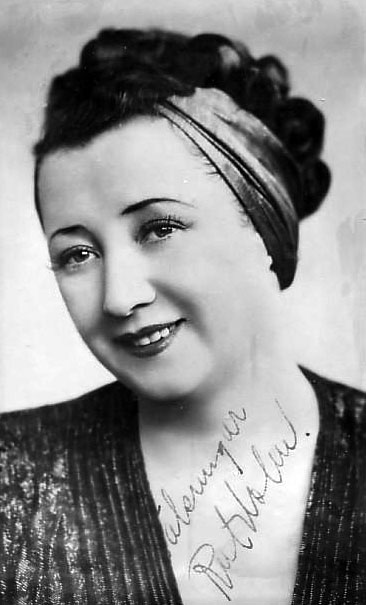