Rut Adler was a feminist and an activist, notably in the refugee and peace movements during the greater part of the 1900s.

Rut Adler was born on 15 April 1888 as one of five siblings in a large country household at Riseberga in the county of Kristianstad. Her mother died when she was little. When she was thirteen, she began attending a girls’ school in Helsingborg. In 1908 she married Axel Adler, whom she had met at Alnarp agricultural institute. In 1909 they settled on Ekered Estate near Lindome outside Gothenburg. The couple had social and cultural interests and they developed the estate into an informal folk high school at which the young farmers’ association (Jordbrukare-Ungdomens Förbund, JUF) could meet and make use of most of the house. The association had been founded in 1925 in Lindome with about 50 members. One of them was the author-to-be Astrid Pettersson.

Rut Adler started off as a liberal and as a member of the liberal women’s group Frisinnade kvinnor. In the general election in 1928 she was on the liberal women’s list. She was active for a long time in the Gothenburg women’s discussion club, and was its chairwoman in 1926–1929. She also arranged a national peace meeting at Ekered in March 1931, with among others Elin Wägner as a lecturer. At Ekered, she also ran a boarding school at times for unemployed young people. Additionally, Rut Adler was active in the municipality, among other things on the Lindome municipal boards for poor relief and child welfare.

Rut Adler became radicalised during the 1930s, and in 1934 she joined the women’s section of the Lindome social democrats. During her Social Democratic period, she was strongly engaged in helping Czechoslovakian refugees and in aid to Spain. In Gothenburg, she helped to start Sweden’s first Spain committee on 4 October 1936. Towards the end of her time as a social democrat, she came to be more and more in opposition to the party, partly through open public criticism of what she described as “a collusive truce with the working class movement’s antagonists”. On 7 February 1940, she was excluded from the social democrats “on account of communist activity”.

The Lindome communist workers’ association was founded in October 1940. Rut Adler, who had just joined the Swedish Communist Party (SKP, now Vänsterpartiet), was notable among the first members, along with Knut and Signe Karlsson. In 1940, she tried to get a certain practical election collaboration going between the social democrats and the SKP in Lindome. This was however declined by the social democrats. In the successful general election of 1946, Rut Adler and Knut Karlsson were elected to the municipal council for the Lindome region.

During the years 1950—1962, Rut Adler was chairwoman of the Gothenburg section of the Swedish Peace Committee. She was a strong opponent to the USA’s involvement in the Vietnam war. Among other things, she wrote many letters to the American president, Lyndon Johnson, and helped sections of the communist women’s association, SKV, to write protests to the American Embassy during 1965.

When the Swedish communist party (VPK) became split in 1967, Rut Adler left the party and became a member of the extreme left Kommunistiska Förbundet Marxist-Leninisterna (KFML) until her death. She continued her work untiringly even after 1967. During her last years, she was involved in opposing Sweden’s joining the EEC.

Rut Adler died in 1969. She is buried in Riseberga Cemetery. 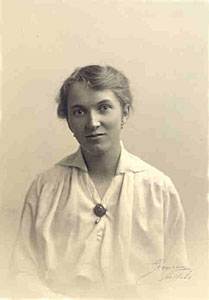