Sara Danius was a professor of literature and an eminent essayist. She was a member of the Swedish Academy and its first woman permanent secretary.

Sara Danius was born in 1962 in the well-heeled Stockholm suburb of Täby, the daughter of the authors Anna Wahlgren and Lars Danius who was also an officer and a teacher. After her parents’ divorce in 1966, she moved with her mother and sister to Malmö. In 1973, her mother moved with the five children she had then to Egypt. Sara Danius and her younger sister were soon allowed however to move back to Sweden where they grew up in the home of their father in Täby. Sara Danius was interested in sport and played basketball at an elite level during her sixth form years. In 1980, she took her final examination in natural sciences at Årsta upper secondary school.

After having travelled around in Europe earning her living for a while as a croupier at various casinos, Sara Danius started her academic studies in 1982 at Stockholm University. In 1986, she gained her B.A. in literature. During her studies, she had started writing literary criticism in the major Swedish daily newspaper Dagens Nyheter and after taking her degree she became engaged there as a critic and editor. She also wrote literary criticism in Bonniers Litterära Magasin.

In 1987, Sara Danius left Sweden to study critical theory and cultural analysis at Nottingham University in England. Her master’s dissertation dealt with the Marxist Fredric Jameson’s theories about the cultural expressions of late capitalism. It took her on to Duke University in the USA where Jameson was a professor, and in 1990 she started doing research under his supervision. In the 1990s, Sara Danius introduced Fredric Jameson’s works to Sweden, and with Stefan Jonsson and Stefan Helgeson she translated Jameson’s fundamental work The Political Unconscious: Narrative as a Socially Symbolic Act in 1994 to Swedish with the title Det politiska omedvetna. Berättelsen som social symbolhandling.

Sara Danius gained her Ph.D. at Duke University in 1997 with the thesis that later was to be the basis of her Swedish doctoral thesis, The Senses of Modernism: Technology, Perception and Modernist Aesthetics, which she presented at the Literature Department at Uppsala University in 1999. It deals with the connection between technology and aesthetics in modernist literature. In the centre stand the three early modernist authors Thomas Mann, Marcel Proust and James Joyce and their respective classics Der Zauberberg, À la recherche du temps perdu and Ulysses, all from the early 1920s. In her thesis, Sara Danius criticises the modernist view of the work of art as autonomous, a view that has long been the norm in American and Swedish literary theory. In her opinion, it was on the contrary the new technologies of the modernist era, such as telephones, photographs, cinemas and x-rays that lay the foundations for modernist aesthetics, since they freed the experiences of the senses in a way that meant that literary creativity could be grounded in a new way in direct experience and perception.

In her following two books, The Prose of the World: Flaubert and the Art of Making Things Visible in 2006, and Den blå tvålen, Sara Danius studies realism, the literary period that preceded modernism. Both books have much in common, but the former is academic in character while the latter is a more popular scientific presentation. As in her book on modernism, she takes three canonised authors’ canonised works as her point of departure. In this case they are Stendhal’s Le Rouge et le Noir, Honoré de Balzac’s Illusions perdues and Gustave Flaubert’s Madame Bovary. Against the prevalent understanding that realism mirrors reality, Sara Danius poses the idea that the aesthetics of realism actually deal with manifesting things and ideas. In her analyses, she shows the massive wealth of detail that characterises the novels of realism. In particular, she emphasises the thorough descriptions of clothes and their significance.

Sara Danius was an excellent stylist, which is most apparent in her essays, partly collected in Husmoderns död och andra texter from 2014. In them, her sharp, accurate analyses celebrate triumphs, as does her personal, often humorous style. During the years after the completion of her American Ph.D., Sara Danius was a guest researcher at the University of California, Los Angeles (UCLA). After her return to Sweden, she was soon awarded large research grants. She spent 2001—2002 at Wissenschaftskolleg zu Berlin and in 2006 she was guest professor at the University of Michigan. In 2005, she was appointed as senior lecturer in literary theory at Uppsala University and in 2008 she was appointed first as senior lecturer and later as professor in aesthetics at Södertörn University College. In 2013, she was appointed professor of literary theory at Stockholm University. The same year, she was elected member of the Swedish Academy. Two years after that, she was the first woman to be appointed permanent secretary to the Swedish Academy.

During Sara Danius’ time at the Swedish Academy, the Nobel Prize in literature was awarded to Alice Munro, Patrick Modiano, Svetlana Alexievich, Bob Dylan and Kazuo Ishiguro. The controversial choice of Bob Dylan is motivated in her book Om Bob Dylan from 2018. In connection with the metoo movement in 2017, conflicts arose in the Swedish Academy concerning how they were to deal with a certain member of the Academy and her husband. The two together were accused of bias, and the husband was later convicted of sexual harassment and abuse. Sara Danius and the majority of the members were on opposite sides of the conflict and on 12 April 2018 she was dismissed as permanent secretary. She later chose also to leave her chair as a member. The news spread internationally and many demonstrations were held outside the Swedish Academy in Stockholm to support her. The crisis suffered by the Swedish Academy led to the Nobel Prize in literature not being awarded in 2018.

Sara Danius’ authorship constitutes a distinct and consistently written body of work. It is characterised by a fundamental interest in society and aesthetics. She was also very interested in design, as is apparent in her essays and has also been expressed in many lesser writings. Her specially designed dresses created by Pär Engsheden aroused great attention at the Nobel dinners. These creations were throughout linked to the literature about which she had carried out her research.

In 1989—2010, Sara Danius was married to Stefan Jonsson, a literary theorist, author and professor at Linköping University, with whom she had her son Leo. In 2014, Sara Danius was diagnosed with breast cancer.

Sara Danius died in 2019. Her funeral in Storkyrkan in Stockholm gathered great crowds of people. She rests in Katarina Cemetery. 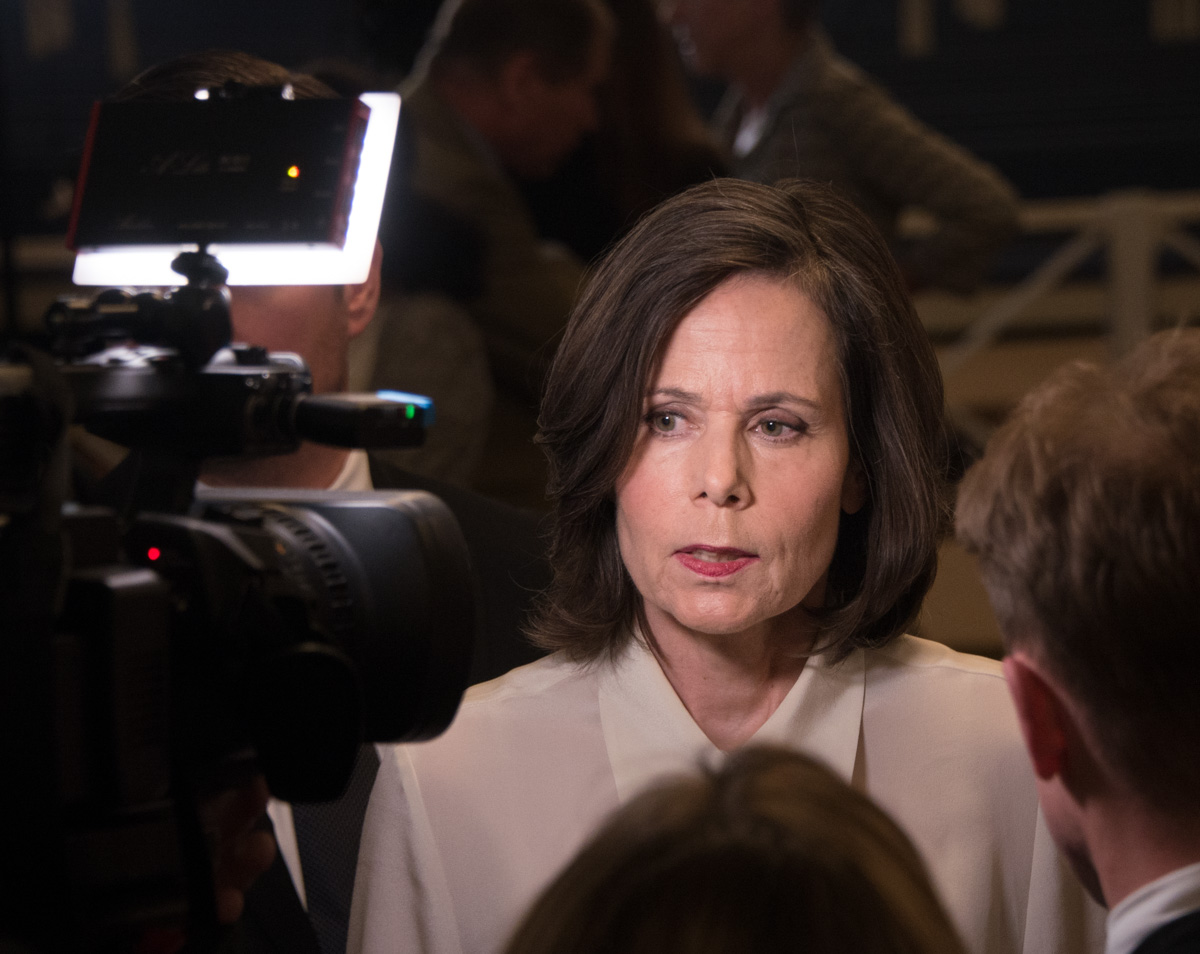 Sara Danius at the announcement of the 2016 Nobel Prize in Literature. Photo: Frankie Fouganthin (Wikimedia Commons)