Selma Lagerlöf is a world-famous author. In 1909 she became the first woman to be awarded the Nobel prize for literature. Later she became an icon of the suffragette movement in Sweden and worldwide.

Selma Lagerlöf was born in 1858. She grew up at the Mårbacka estate in Värmland where she enjoyed a happy childhood. The oral tradition – which was integral to her upbringing – forms an important element of her writings. Her father, Erik Gustaf Lagerlöf, was a property-owner and a lieutenant. He was a very sociable person who was not agriculturally-minded. Whilst Selma Lagerlöf’s brothers Daniel and Johan were sent away to be educated she and her sisters stayed home. The family finances worsened steadily and her father took to the bottle. When they could no longer afford to keep their governess Selma Lagerlöf had to take on the role of tutor to her sister Gerda, who was four years her junior. They would write poems and puppet plays together, withdrawing into their own imaginary world. The girls from the neighbouring farms also contributed to the poetry-writing.

It was when Selma Lagerlöf, then aged 22, read out a bridesmaid’s speech at a local wedding that her talent was discovered by Eva Fryxell. She was the daughter of the Sunne parson Anders Fryxell and later became a well-known feminist in her own right. Eva Fryxell encouraged Selma Lagerlöf to gain a proper education, but Selma’s father remained opposed to this. With the help of her brother Johan, however, Selma Lagerlöf took out a loan in order to pay to obtain qualifications. Selma Lagerlöf was a bit older than her fellow students when she enrolled at Högre lärarinneseminariet (the advanced teacher-training programme) in Stockholm, wearing her hair in a long pleat, and speaking in her local dialect. After discovering her talent for writing sonnets – about the teachers, and other students – she became a popular member of the student body.

Selma Lagerlöf was already a well-read person when she started her teacher training. The courses she took exposed her to the important issues of the day. Selma Lagerlöf was deeply influenced by Viktor Rydberg’s Bibelns lära om Kristus and the religious liberalism of the day and this played a role in her views on life and her approach to literary creativity. She was also influenced by contemporary origin theory which was founded in the natural sciences. Selma Lagerlöf was deeply impacted by the experiences she gained during her socialising and the productions she attended at the Dramaten theatre and Kungliga Operan (the royal opera) during her time in Stockholm. She wrote sonnets for more than 60 actors and singers in various roles, all of which she hoped to get published.

Selma Lagerlöf’s father died in the summer of 1885, and that autumn she began to work at Elementarläroverket för flickor (girls’ school) in Landskrona. This introduced her to a new women’s world within the school whilst also witnessing the poverty and need within the surrounding area. Selma Lagerlöf became an activist with regard to welfare issues but never lost her dream of becoming an author. After having met Sophie Adlersparre – the founder of the Fredrika-Bremer association – she released her debut work of four theatrical sonnets in Dagny in 1886. Adlersparre took an interest in Selma Lagerlöf’s literary development and prompted her to abandon the traditional poetic form.

Selma Lagerlöf developed the idea to write Gösta Berlings saga when she was living in Stockholm. She tried to write both in verse and in the style of a play. After her family lost Mårbacka estate she decided to write in her own style in order to safeguard her memories. In the spring of 1889 she found her own style – a lyrical, rhythmic form of prose. This “Gösta Berling style” is full of exclamations, personal expressions of emotion, and appeals to the reader. The reserved priest in the story is surrounded by beautiful women, all the while twelve odd gentlemen rule over the industrial complex on the shores of lake Löven. This style was distinctively different from the literary “grey-weather realism” of the 1880s and in 1890 Selma Lagerlöf won a competition held by Idun with her entry comprising five chapters from the novel.

Her debut novel gained mixed reviews. Female reviewers were very favourable. Carl David af Wirsén, the permanent secretary of Svenska Akademien (the Swedish Academy), and Karl Warburg were dismissive. Selma Lagerlöf’s mentors, Fryxell and Adlersparre, defended her work but this seemingly only increased other critics’ opposition: they were threatened by a ladies’ journal such as Idun advertising a literary competition which they felt jeopardised their role as sole arbiters of what was deemed literarily worthy.

Warburg advised Selma Lagerlöf to “re-write national folklore” and immediately after the release of her debut novel she split her time between writing and teaching. She experimented both with her style and in seeking out new themes in a number of short stories. There are hints of bold feminist projects, such as writing history from a female perspective, turning the world of symbols on its head, and coming to terms with the tendencies within Christendom to oppress women.

Following her literary debut Selma Lagerlöf – through her Danish translators Ida Falbe Hansen and Elisabeth Grundtvig – got in touch with the Danish women’s movement. A positive review by the influential Danish critic Georg Brandes paved the way for her success.

Selma Lagerlöf met Sophie Elkan, a fellow author, at the turn of the year 1894. Their love affair seemed like a glacial thaw to Selma. The urbane Elkan became her “travelling companion”. Selma Lagerlöf’s first overseas journey led to the publication in 1897 of Antikrists mirakler. It is a love story set in Sicily which also discusses the relationship between Christianity and socialism.

Selma Lagerlöf’s last teaching term at Elementarläroverket för flickor in Landskrona was the spring term of 1895. She felt she was now able to live off the proceeds of her writing. She left Landskrona in 1897 and moved to Falun, where her sister Gerda Ahlgren lived. This initiated a productive cycle. Her 1899 work, En herrgårdssägen, is a study of the psychology of mental illness and the wonder of love. Her next work, Jerusalem, from 1901–1902, is based on real events from Nås parish in Dalarna. In 1896 a group of peasants had left that area for religious reasons and made their way to Jerusalem. Selma Lagerlöf had read about this in a newspaper article and then elaborated on the information. However, she also undertook detailed research by travelling to Jerusalem herself and visiting Nås. The Ingmar family’s journey on “God’s road” represented the need for each generation to independently undergo a moral revival. Lill-Ingmar gradually becomes Stor-Ingmar not by following the traditional route but by taking an entirely new path. The first part of Jerusalem was rapturously received. The book portrays the work the men do as somewhat of a rite, as the meaning of life, and as an expression of the soul of the people.

Selma Lagerlöf had at this point begun a new romantic attachment in Falun with Valborg Olander. She was a teacher who produced a clean copy of her manuscript and helped her with other practical matters. Selma Lagerlöf’s relationship with Olander brought her even closer to the women’s movement. She participated in the suffragette debate and was happy to make an appearance when her name could prove useful. The speech she gave, entitled ‘Hem och stat’ (home and the state), in conjunction with the 1911 international suffragette conference in Stockholm, generated a lot of attention. She placed women’s work as the focal point of her speech. Selma Lagerlöf encouraged women to become involved in everything in order to build a ‘good’ state, in collaboration with men.

This line of argument as in alignment with Elisabeth Cady Stanton’s speech given at the first women’s congress in 1848 in Seneca Falls, USA. Selma Lagerlöf’s speech differed ideologically from that of her contemporary and globally renowned fellow national Ellen Key, who believed that women were only suited to certain types of work and that motherhood was a woman’s most important contribution to society.

Through Olander Selma Lagerlöf was approached to write a new geography reader for Swedish schools. Nils Holgerssons underbara resa genom Sverige required a long period of preparation and a lot of travel. The book became a classic of children’s literature and also became her most internationally distributed work. A few months before it was completed, in 1907, Selma Lagerlöf re-purchased the ruined Mårbacka building. She was able to re-acquire the entire property after she had been awarded the Nobel prize in 1909. Her writing gained a renewed connection to her native area following her return to Mårbacka, as expressed in part in Liljecronas hem, from 1911, and in Kejsarn av Portugallien from 1914.

Demands arose for literature to include contemporary depictions and social activism after the general strike of 1909. Selma Lagerlöf wanted to assert herself as a contemporary writer and thus her 1912 work Körkarlen is situated in the slums and portrays the fine line between life and death on a given new year’s evening during which Sister Edith of the Salvation Army seeks to save the drunken prankster David Holm.

The First World War had a debilitating impact on Selma Lagerlöf. Many eagerly awaited her written opposition to the war. This appeared in 1918 in the form of her book Bannlyst in which she conveyed the message that war is worse than cannibalism.

Once Mårbacka manor had been refurbished as a magnificent building in strict Carolinian style Selma Lagerlöf also returned to her childhood in her books. Mårbacka was published in 1922, Ett barns memoarer in 1930, and Dagbok in 1932. She intentionally portrayed the farm and its workers in an idealised fashion but many believed that her depictions were of genuine memories.

Every aspect of the farm – not just Mårbacka manor – was refurbished. Selma Lagerlöf created her own “patriarchal” home. She was active within municipal politics on behalf of the Liberals. She became an institution during her own lifetime and tourists came to Mårbacka disrupting the workday.

The inspiration for Selma Lagerlöf’s last series of novels came from a priest’s correspondence collection. The first instalment, Löwensköldska ringen, from 1925, is a ghost-story reflecting the contemporary interest in the occult. Its sequels, Charlotte Löwensköld, also from 1925, and Anna Svärd, from 1928, sought to determine how a pious priest could become morally destroyed.

Selma Lagerlöf’s last publication was Höst in 1933, a collection of stories and speeches. She never ceased writing, however, and as late as January 1940 she was working on an account of Sophie Elkan’s life. Her books had been translated into nearly 40 languages during her lifetime. Various subsequent adaptations of her works into films and plays have contributed to maintaining general interest in her writing.

Selma Lagerlöf died at Mårbacka in March 1940. She lies in the family grave at Östra Ämtervik cemetery. According to her will Mårbacka remains a family farm and a heritage site. The general public can see the house which is maintained as it was when Selma Lagerlöf died. Her manuscripts, correspondence, and other items have all been deposited within Kungliga Biblioteket (the royal library). 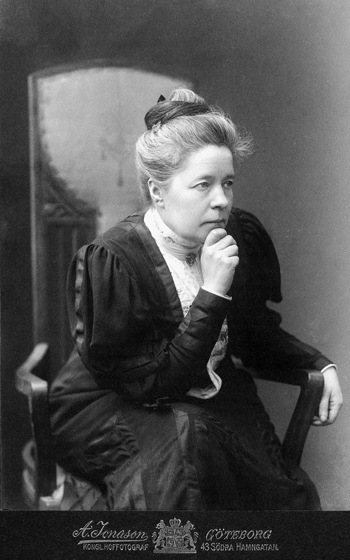