Sickan Carlsson was one of the most popular Swedish film stars and revue-show actors from her debut in the 1930s onwards.

Sickan Carlsson was born in Södermalm in Stockholm in 1915. She was the only child of typographer Witus Karlsson and his wife, Siri, a shop assistant. Sickan Carlsson was named after the actor and singer Sickan Castegren, who was her father’s favourite performer. Her name was neither artistically chosen nor was it a nickname. She attended the Statens normalskola för flickor (state girls’ school), where Birgit Tengroth was one of her classmates. In the afternoon she attended Operans Balettelevskola (Opera ballet school) where she was in the same class as Annalisa Ericson, who was two years her senior. One day Birgit Tengroth brought Sickan Carlsson along with her to Radiotjänst (Swedish radio) and they both made their public performance debut, aged 10, on the Barnens brevlåda radio programme, during which Sickan Carlsson sang a song. Music was in her bones – her father played guitar and her mother was a pianist. As a child Sickan Carlsson enjoyed entertaining and performing at home in her apartment on Högbergsgatan.

Sickan Carlsson’s father worked at Centraltryckeriet (later Esselte) who organised an annual revue show which was performed at the Gröna Lund theatre. In 1930 Sickan Carlsson made her stage debut there, aged 15. She was a success and her reputation quickly spread to professional revue show circles. She was offered jobs by both Södra Teater boss Björn Hodell and the revue company Kar de Mumma. However, Sickan Carlsson’s parents wanted her to continue her schooling first so she had to wait until she had graduated before making her formal stage debut. Once she had completed her education Sickan Carlsson devoted herself to a career as an artist. She made both her stage and big screen debut in 1932, in the play Toni with Naima Wifstrand and in the film En stolen vals, directed by Lorens Marmstedt. That year Sickan Carlsson was also employed at Södra Teater in Stockholm in the comedy Vi som går köksvägen and the new year revue show Ett leende år – thus her formal revue debut was in 1933. The ensemble included Annalisa Ericson. A few weeks after her revue debut she recorded one of its songs, ‘En man som han’. Thus, by the tender age of 17 she had performed in every sphere of the professional branch which she came to call her own throughout her almost 60 year long career.

Sickan Carlsson acted in almost 50 films for almost as many years. These include Landstormens lilla Lotta, 1939, Löjtnantshjärtan, 1942, and Min syster och jag, 1950. She often acted opposite Åke Söderblom, Gunnar Björnstrand and Hasse Ekman. In 1945 the director Schamyl Bauman initiated the tradition of making annual comedies with roles especially written for Sickan Carlsson. These became so popular that ‘Sickan films’ became a concept. When Schamyl Bauman was no longer able to make films Hasse Ekman took over from him. Films like Sjunde Himmel, 1956, and Med glorian på sned, 1957, and Fröken Chic, 1959, he made full use of Sickan Carlsson’s comedic skills. Sickan Carlsson portrayed strong, competent career women in Ekman’s films – which at that time was quite uncommon, and considered new-fangled and slightly provocative. Hasse Ekman also directed Sickan Carlsson in the first Swedish sitcom, Niklasons, from 1965, in which she played the family matriarch opposite Karl-Arne Holmsten as patriarch.

In the 1961 film Lustgården Sickan Carlsson felt she was finally allowed to display her talents in a more serious and mature role. In her memoires she stated that: ‘I was probably never going to become a great actress, I know that. But perhaps an improving one. One with greater options for expressing herself, more nuanced, and with a richer register.’ Her final film appearance in Charlotte Löwensköld was also a serious role: she played a clergyman’s wife.

Sickan Carlsson also acted on the stage and in revue shows as well as on the big screen. In 1945 she acted opposite Max Hansen in En förtjusande fröken and in Gröna hissen. They had both appeared in a film version of the latter in the previous year. From 1935 onwards Sickan Carlsson also spent many years working with Karl Gerhard in his revue shows, indeed he was somewhat of a teacher to her. Sickan Carlsson also performed in some Kar de Mumma revue shows, such as Kyss Karlsson, in 1967, and in Den stora succén, the following year. Once again Hasse Ekman was the director. Sickan Carlsson was also responsible for launching many film tunes during her career which were subsequently released on records. These included ‘Jag ska sjunga för dig’, ‘Klart till drabbning’ and the tune which became her signature song: ‘Jag är så glittrande glad’. She also regularly appeared on the radio, on Dagens Revy, Tjugo frågor, Frukosklubben, Det ska vi fira, and Schlagerfrågan.

For a time Sickan Carlsson was one of the highest-paid Swedish actors; only Viveca Lindfors and Sonja Wigert earned more than her in 1945, for example. A poll from 1942 revealed that Sickan Carlsson ranked amongst the top four most popular actors and in a 1953 popularity contest in Filmjournalen magazine Sickan Carlsson took pole position. She was one of the biggest stars of Swedish cinema, particularly during the 1940s and 1950s.

In 1979 Sickan Carlsson was awarded the royal medal of the eighth degree. In 1994 she received the Svenska Filmakademi (Swedish academy of film) silver shield, and in 2005 she was given the Hedersguldbagge in recognition of her lengthy film career.

Sickan Carlsson was known by the epithet of ‘glittrande glad’ throughout her life and she often portrayed jaunty, upright, respectable women. This seemed to reflect her actual personality, which also comprised integrity, strength, and unparalleled energy as well as a great sense of comic timing and great humour. Although the majority of Sickan Carlsson’s films were comedies she often portrayed lively, modern, ordinary and easily relatable women in them rather as opposed to distant glamorous film stars. She was down to earth. Sickan Carlsson went from playing sweet girlish roles to portraying upperclass shrews, mothers, and wives, ambitious, hard-working career women, to mature women who embodied a lifetime’s wisdom and warmth. During hard times, wartime and threats of war, her appealing laughter and ability to spread happiness provided the comfort and hope which the Swedish public sought in order to keep their spirits up.

Sickan Carlsson died in Stockholm in 2011. She is buried at Bromma cemetery. 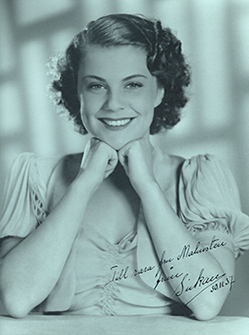