Signe Aurell was a poet and essayist, widely published in the Swedish-American labour press between 1915 and 1920. She advocated specifically for the unionisation of women working in domestic service in the United States of America.

Born in 1889, in Gryt, Sweden, Signe Aurell was one of six children born to Anna and Andreas Aurell. Her father worked as a teacher at schools around northern Skåne, where Signe Aurell would spend much of her life.

In 1906, she joined lodge no. 558, “Hoppets gryning”, of the International Order of Good Templars (IOGT). Her membership in a temperance organization is one of the earliest signs of Signe Aurell’s social activism. While still living in Sweden, she would join two other lodges, “Gustav Adolfs minnen” in 1908 and “Skogskällan” in 1911, as she and her family moved around.

Just two years later, in 1913, Signe Aurell moved to the United States. Like many Swedish immigrants, she crossed the Atlantic in third-class accommodations, arriving at Boston, Massachusetts via Liverpool. Once there, she quickly travelled to Minneapolis, Minnesota, where she would spend the next seven years of her life.

In Minneapolis, Signe Aurell joined a local IOGT temperance lodge, "Lincoln Lodge No. 2". That lodge would come to play an important role in her life. IOGT members came to her aid she spent her first Christmas ill at the Swedish Hospital in Minneapolis. She recovered and went on to serve in various roles in the lodge, before leaving the organization around 1917.

Sometime in the mid-1910s, Signe Aurell joined the Industrial Workers of the World (IWW), perhaps signalling a shift in her focus from temperance to labour rights. A radical international labour union formed in 1905 in Chicago, Illinois, the IWW advocated for direct action and attracted a large number of immigrant workers. Signe Aurell, along with her friends and fellow activists Carl Ahlteen, Walfrid Engdahl, and Sigfrid Stenberg, were just a few of the many Swedes who joined the IWW. Alongside Ahlteen, Engdahl, and Stenberg, she would begin writing regularly for Allarm, a Swedish-language newspaper published by the Scandinavian Propaganda League of the IWW in Minneapolis.

It was in the pages of Allarm that Signe Aurell first published her radical poetry in support of labour rights. Her first poem, “Jul,” appeared on the front page of the December 1915 issue of Allarm, alongside a charcoal drawing of Joe Hill, the Swedish-born American labour activist who has been executed just a few weeks prior to publication. In that same issue, Signe Aurell published her translation of Joe Hill’s poem, “Joe Hill’s Last Will.” She later said that she and her fellow activists had advocated and fought for Hill’s freedom, to no avail. Yet Hill’s execution did not deter her, and she wrote two separate poems titled “Josef Hillström” in honour of the Swedish American labour activist. While Signe Aurell’s translation of “Joe Hill’s Last Will” has endured as “Mitt testamente” and sometimes “Joe Hills testamente” in various IWW publications, her own poems and short essays speak to her commitment to the labour movement.

In the years that followed, six different Swedish-language newspapers in the US published at least twenty additional poems written by Signe Aurell, as well as two essays, two short stories, and one letter. In addition, at least nine poems as well as her translation of “Joe Hill’s Last Will”, were published in three Swedish newspapers.

Less than a year after her debut in Allarm, Signe Aurell wrote “En uppmaning,” an essay arguing that women should educate, organise, and unionise. Having worked as a domestic servant herself, Signe Aurell suggested that the work that many immigrant women were doing was akin to selling “your body and your soul, your labour, your interests, your thoughts, your independence”, adding “work claims everything” (“sin kropp och sin själ, sin arbetskraft, sina intressen, sina tankar, sin självständighet, allt lägger arbetet beslag på”). In addition, as an IWW member, she advocated for direct action. Her friend Walfrid Engdahl in 1961 recounted an episode where she had engaged in such action: after she had been refused payment by an employer, Signe Aurell threw the clothes she had just washed back into the dirty water, walked out, and never returned.

Signe Aurell’s two short stories, published in 1918 and 1919 in Allarm and Nya Världen, a Swedish-language newspaper published by the IWW out of Chicago, shared religious themes. In them both, God is sympathetic and even supportive of the IWW and other labour activists, a reminder that for her, the tenets of Christianity complemented the labour movement.

While living in Minneapolis, Signe Aurell had at least twelve different addresses between 1913 and 1920, which speaks to the difficult living situation that many immigrants faced in their new country. At one point, in 1917, she lived with her friend Sigfrid Stenberg along with his wife Gertrude and their child, whom Signe Aurell called Barbro. The poem “Lilla Barbro”, first published in 1919, which Signe Aurell wrote for the child, speaks to the very real difficulties of the labour movement while remaining hopeful for the future.

In 1919, Signe Aurell self-published a collection of poetry, Irrbloss, consisting of 23 poems, some of which had been previously published. Signe Aurell sold the book for 25 cents from the various addresses that she called home between 1919 and 1920. The book of poetry features works that speak to the immigrant experience, as she writes of the family she left behind, of homesickness, and of Sweden. It also contains themes of the labour movement; several poems speak to the role of women in changing society and the importance of unionization. Like so much of Signe Aurell’s work, Irrbloss features poetry that is instructive, reminding the reader that everyone has a role to play in improving society.

Shortly after the publication of Irrbloss, in 1920, Aurell moved back to Sweden, as she had planned to do since at least 1918. Upon her return, she continued writing, although her publication record slowed. Two of her final poems featured in Syndikalisten in Sweden in 1921, and several more appeared in Bokstugan between 1920 and 1924. Her previous work, especially her poems about Joe Hill, would continue to appear in IWW songbooks published both in Sweden and in the United States of America.

Signe Aurell’s activism seems to have waned after her return to Sweden, although it is unclear why. She lived with her parents in Osby, taking care of them for the rest of their lives. She also did intermittent work at her sister Nanna’s tobacco and convenience store in Glimåkra. Sometime during the 1950s or 1960s, Signe Aurell, along with her brother Viking, published a songbook titled Signes visor, consisting of eight of her poems that Viking set to music. The songs do not address or speak to the radical labour activism of her youth in Minnesota. In 1955, however, she gave a first-person account of her labour activism to Ny Dag, a communist daily newspaper based in Stockholm. Her last known published work, an untitled acrostic, appeared in Svenska Dagbladet on June 5, 1965.

Signe Aurell never married or had children of her own, but the children in her Osby neighborhood viewed her fondly in her later years. She died in Osby in 1975, at the age of 86. She was buried next to her brother Nils in the cemetery at Osby Church, although her headstone has since been removed. 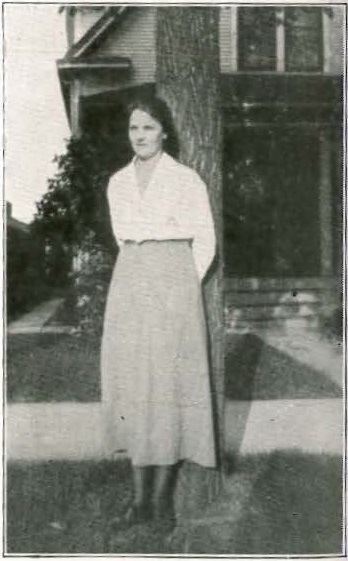 Signe Aurell in front of her house, 1919. Image published in Bokstugan 1:8, 1920. Photographer unknown