Signe Ehrenborgh-Lorichs was a sculptor and an author. She primarily produced portraits but she also created larger works for places such as churches and other public spaces.

Signe Ehrenborgh-Lorichs was the daughter of Fredrik Lorichs, an estate owner, and his wife Anna von Hofsten. She was born in 1899 and she grew up at Valsta manor, part of Odensvi congregation north of Köping in Västmanland. She had an elder sister who died young, and she had four younger brothers. After her initial schooling in Odensvi she then continued her education at the girls’ school Västerås högre elementarläroverk för flickor, where she was a boarder from the autumn of 1903 onwards. However, after just three school terms Signe Ehrenborgh-Lorichs was forced to suspend her studies due to illness. Indeed, health problems continued to plague her throughout her life.

Signe Ehrenborgh-Lorichs married in 1910, at the age of 20. Her husband was Lieutenant Ernst Lindh. However, after just four years of marriage, the couple divorced. She then married Baron Gösta Ehrenborgh, with whom she spent a couple of years living at Bergsbrunna farm, south of Uppsala. Following the sale of the farm in 1920 the couple separated and Signe Ehrenborgh-Lorichs suffered a breakdown. This led her to become involved in the humanitarian efforts undertaken by the Swedish branches of Save the Children and the Red Cross on behalf of war-torn Europe. In the autumn of 1920 she arrived in Austria where she subsequently spent two years actively involved in relief work for that country’s child war survivors, which included running a children’s camp. In Vienna she became friendly with Elsa Björkman-Goldschmidt. She gave public talks about her Austrian experiences at various places in Norrland during a five-week long fund-raising tour in the spring of 1922. Later she was awarded the Austrian Red Cross merit of honour in recognition of all her efforts.

Signe Ehrenborgh-Lorichs artistic interests had previously been quite limited but they suddenly came to the fore following a lengthy period of ill-health in 1925. She had been bed-bound as a result of sciatica. She herself recounted how she was suddenly gripped by a strong urge to begin to form shapes and create items in clay. A period of self-instruction followed, before she eventually made contact with the sculptor and designer Anna Petrus-Lyttkens who offered her guidance and encouragement. She then began an educational journey which took her to Oslo, where she studied with Professor Wilhelm Rasmussen, and then on to Copenhagen to take lessons from the sculptor Anders Bundgaard in 1928. She continued her artistic training in Paris and Berlin, amongst other places.

When Signe Ehrenborg-Lorichs returned to Sweden she settled in Ålsten, near Bromma. In 1929 she had a house built there with an adjoining studio. She named the house Selstugan, using her initials for the name. That same year she participated in an exhibition held by Västerås konstförening (art association), submitting a number of her works, including a mahogany sculpture of the Bishop Egislus Birgeri, from the fourteenth century, which can now be seen in Odensvi church. Another one of her early efforts which was displayed at the exhibition was Drottning Filippa och enhörningen, which represented Queen Philippa of England. Since 1954 a bronze cast of this work has stood in Bivurparken in Köping.

From the early 1930s onwards Signe Ehrenborgh-Lorichs became an established sculptor with a particular focus on producing portraits in the form of busts, medallions, and reliefs commissioned by private customers. Her output was extensive and her commissions included portraits of the likes of director Sigfrid Edström, Anna Lenah Elgström, Emilie Rathou, and Kerstin Hesselgren. Above all, it was her children’s portraits which garnered attention, particularly a sculpture of Monika, the daughter of author Dan Andersson. Other major works from her time at Ålsten include the group of figures entitled Mor och barn, from 1931, which was later donated to Olovslundsskolan in Bromma, as well as the bronze sculpture called Den heliga Birgitta, from 1932, which is in Västerled church in Bromma.

In order to continue evolving her artistry Signe Ehrenborgh-Lorichs undertook study tours to several European countries and in the mid-1930s she spent almost a whole year in Spain. She left her home and studio in Ålsten in 1937, which she had intermittently shared with her friend, the author Astrid Forsberg, and then moved back to the family farm at Valsta. She carried on working as a sculptor and it was at this time that she began to work on what probably became her best-known piece, namely a large bust of the national poet Richard Dybeck. Although the bust appears to have been completed relatively quickly it nevertheless took some time to have it cast in bronze and it was not exhibited until 1954. That year it was inaugurated at Dybecksgården in Odensvi. Her final major piece of work was a series of iron reliefs entitled Odensviborna går till Köping, portraying historical representations of people journeying into town to complete various tasks. The series of images is on display at the hospital in Köping and the work was inaugurated in 1962. Many of Signe Ehrenborgh-Lorich’s other sculptures can be seen at Odensvi church as well as at Valsta.

Alongside her sculptural work Signe Ehrenborgh-Lorichs also dedicated herself to writing. She authored a great number of short stories, poems, and causerie-style newspaper columns which, from the 1920s onwards, were published in daily papers and in journals such as Idun, Svensk Damtidning, and Morgonbris. She also translated a play written by the Russian writer Leonid Andreyev. She also wrote travelogues as well as articles on historical subjects, the latter of which were often connected to her home area and family. Signe Ehrenborg-Lorichs took great interest in local- and family-history and it was thanks to her efforts that historical accounts of Valsta were collected, as well as documents from her own life, and combined to form the so-called Wahlstaarkivet.

Signe Ehrenborgh-Lorichs died in 1979 a few months after her 90th birthday. She was buried in the Lorich family grave at Odensvi cemetery. 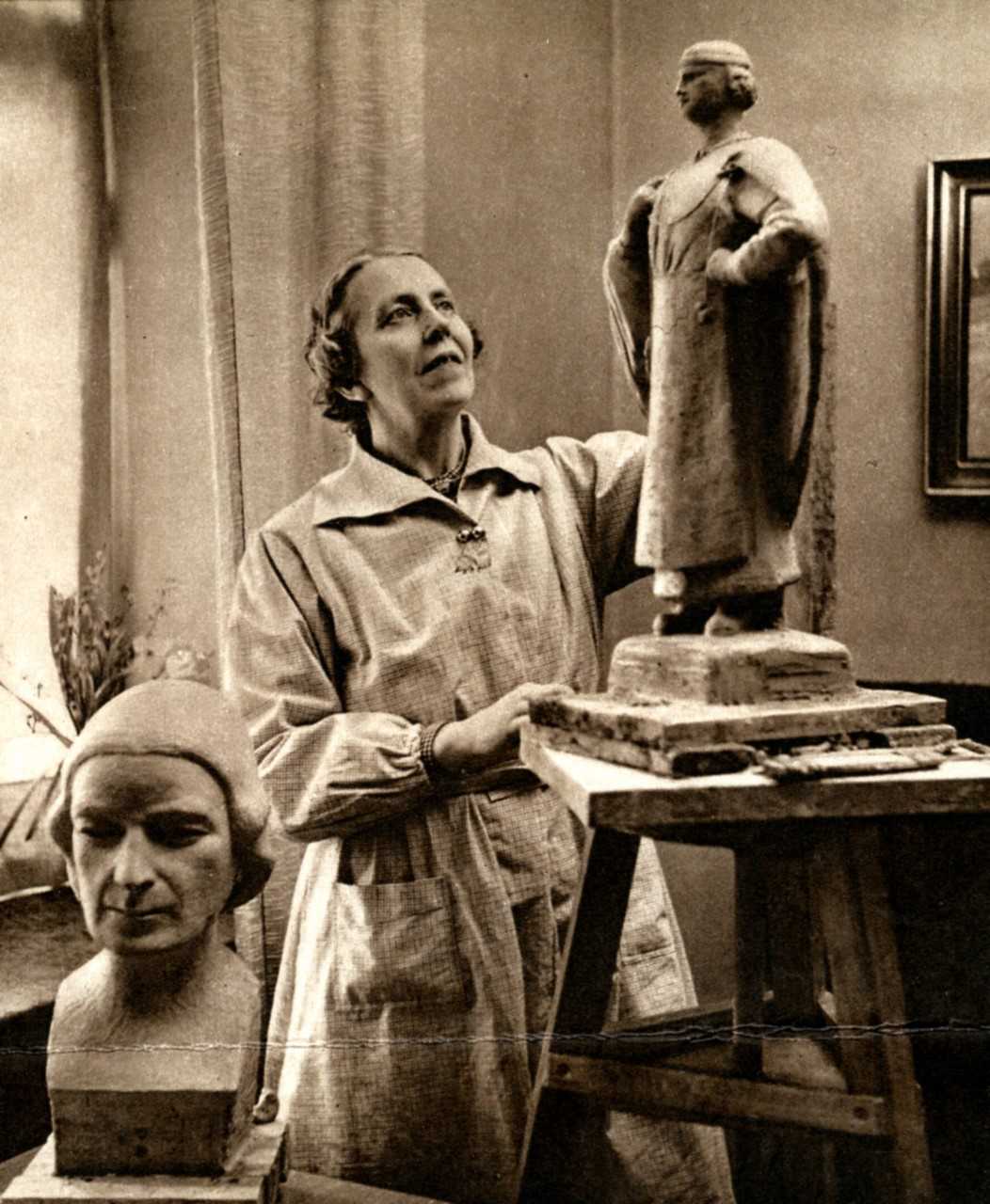