Signe Gustafsson was an accordionist. She was professionally active as a musician during the 1930s and 1940s. When the accordion and accordion music had a revival in the 1970s, she became a well-known representative for the instrument, as among other things the front figure of the fictional accordion kingdom Bälgien (a word-play on Belgium) and initiator of the festival Bälgspel vid landsvägskanten (Accordion Music at the Roadside) in Ransäter in the rural province of Värmland.

Signe Gustafsson was born in 1911 as Signe Bergqvist in Lesjöfors in Värmland, which was a works community dominated by the local ironworks. The musical life there was very lively, largely thanks to the club life that grew up around the ironworks. Signe Gustafsson learned to play the organ and piano at an early age, first on her own and later by taking lessons for Axel Branzell, a local church organist. In 1928, her father, himself an accordionist, bought her her first accordion. It had belonged to a relative who had died. Signe Gustafsson started a trio with the accordionists Billy Hedström and Einar Persson, and they performed at dances and club parties in Lesjöfors and its surroundings.

During the first half of the 1930s, Signe Gustafsson took part in several local accordion competitions. In one such competition in Hagfors in 1935, she came second after the established accordion artist Stina ”Bångbro-Stina” Karlsson. This result gave Signe Gustafsson a certain fame as a skilful accordionist, and the same year she moved to Stockholm where she had a number of music engagements. She played there with among others Lily Ekström’s Ladies’ Orchestra who regularly performed at the Skandinav Restaurant in Stora Nygatan. She also played at Åhlén & Holms terrace, at Sixten’s Varieté at the now demolished Nöjesfältet opposite Gröna Lund, and at Hamburger Börs. With the artiste troupe Cabaret Parade she toured in Denmark and Norway and also in Swedish country villages and towns. She was a member of Eugén Severin’s rhythmic ensemble that toured with the singer Folke Lindberg, nicknamed “Folkelin”, in 1935. In the advertising, in which Signe Gustafsson (then Bergqvist) was the only name to be mentioned apart from Lindberg and orchestra leader Severin, she was described as “Scandinavia’s foremost female accordion star” and “a first-class attraction”.

During the 1930s, Signe Gustafsson performed regularly on the radio, often in duet with the accordionist Folke Malmstedt to whom she was also married for a time. Like most of her women accordionist colleagues in the 1930s and 1940s, she was however never recorded. Nor was she active as a composer to any significant extent. Only one song written by her is known, the waltz “Purala vals” dedicated to the Purala Finnish farm in the Finnish forests of northern Värmland.

In 1941, Signe Gustafsson and Folke Malmstedt toured together with the acrobat troupe Rafnistas under the name Cirkus-Varietén — Rafnistas-Malmstedts Tournén, that combined acrobatic numbers, clowns, dance displays and accordion music. In the 1940s, she was also engaged by Cirkus Schreiber in Karlskoga under the leadership of circus director Baptista Mijares-Schreiber. There she was a member of a ladies’ orchestra that participated in the circus’s tours around the whole country.

In the early 1940s, Signe Gustafsson left Stockholm and returned to Värmland, first to her home town Lesjöfors and later to Filipstad. After her arrival home in Värmland, Signe Gustafsson met her husband-to-be Konrad Gustafsson with whom she had a daughter, Monica. During the 1950s and 1960s, she left the music profession behind her and her accordion sat on a shelf for some years. At the end of the 1960s, there was a revival for accordion music that had been overshadowed in the competition with pop and rock music. In 1969, the accordion association Sveriges Dragspelares Riksförbund (SDR) was founded, of which several local clubs were members. Radio and TV programmes like Dags för dragspel on Swedish Radio and Nygammalt on Swedish Television made accordion music familiar to a wider audience. Signe Gustavsson became a foreground figure for this accordion revival and a publicly known person who often performed in various radio and TV programmes. She was a founding member of SDR and took the initiative to founding several accordion clubs, among them the Pionjär club in Persberg in Värmland.

In 1971, the fictional accordion kingdom Bälgien was founded on the initiative of the entertainment journalist Stig Nahlbom. It was a PR organisation that was active in manifesting and popularising accordion music. Bälgien was successful in its public appearances, at least during the 1970s. It succeeded in attracting well-known musicians and cultural personalities who were declared to be Bälgien’s kings, presidents, national poets and so on, and by spectacular events like the annual festivals, the Bälgiaderna. Signe Gustafsson was appointed from the start as permanent queen and thereby the organisation’s fixed figurehead, while there was a new king every year.

The same year as Bälgien was founded, Signe Gustafsson participated in the radio programme Våra favoriter with Rune ”Gnesta-Kalle” Gnestadius as programme leader. There, in a live broadcast, she launched the idea that Sweden’s accordionists should gather together to make music, inspired by the folk music movement’s music-making meetings. The local district association in Ransäter in Värmland jumped at the idea, and in cooperation with Signe Gustafsson the event Bälgspel Vid Landsvägskanten was arranged for the first time in the summer of 1972. This first meeting attracted about 300 participants and has since grown. Nowadays it attracts thousands of participants each summer.

Signe Gustafsson also had a strong interest in the history of the accordion. She had a large collection of older accordions, posters, printed music and other material of interest to cultural history. She had a vision of a House of Accordions that would function as a concert hall, an education centre for accordion clubs and not least as a museum for her own collection of accordions. Through Bälgien, a farm was purchased in Fogdhyttan outside Filipstad in 1977. The purchase was financed by a great dance and accordion gala at Älvsjömässan outside Stockholm, that attracted 5,000 participants. Among the artists who turned up to help realise Signe Gustafsson’s dream were Sven-Ingvars, Bröderna Lindqvist and Andrew Walter. However, on account of financial difficulties, the House of Accordions, called Bälgiengården, never became a reality and the property was sold after a few years. Lesjöfors works museum took over the responsibility for Signe Gustafsson’s collections instead, and parts of that material is now exhibited in a special pavilion called Signe’s Gazebo. A small collection of photographs and printed matter from Signe Gustafsson is to be found in the Svenskt visarkiv in Stockholm.

Among the accordionists with whom Signe Gustafsson often played were Stig Bräck, Bror Frisk, Lasse Benny (artist name for Lars Georg Bergman) and Nils Fläcke. She was also a close friend of Sven Hylén and Andrew Russell (artist name Anders Granlund), two real pioneers of Swedish accordion music. She was the driving force behind Andrew Russel’s first public performance since the 1930s in the TV programme Nygammalt in 1972. Signe Gustafsson had heard Sven Hylén as early as 1928 in a duet with Ragnar Sundquist in Lesjöfors Folkets hus. The concert made a great impression on her and Sundquist and Hylén had been two of her foremost role models among accordionists since then.

Signe Gustafsson died in Filipstad in 2004, at 93 years of age. An accordion festival was organised in Lesjöfors a number of years after her death, to honour her name. 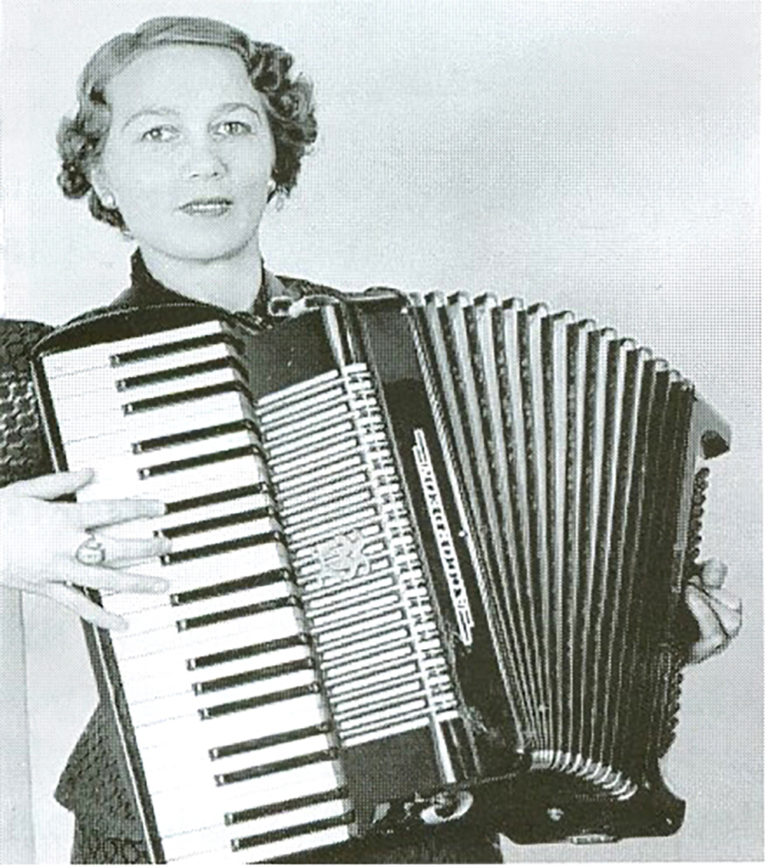