Signe Wennberg was a teacher, a school principal, and a suffragette who was active in Helsingborg during the twentieth century.

Signe Wennberg was born in Skara in 1888. She was the eighth in a family of ten children. Her father, Carl Gustaf (Gösta) Wennberg, was a legal practitioner who at the time had been promoted district judge. In 1899 the family moved to Gränna, which was Signe Wennberg’s mother’s hometown.

After completing her schooling in Jönköping Signe Wennberg trained at Privata högre lärarinneseminariet (private advanced female teacher-training programme) in Lund, graduating in 1912. She moved to Helsingborg in 1913 and took a job at the Wintzellska school. In 1918 Signe Wennbeg was appointed director of the school and later its principal. The school merged with Ebba Lundberg’s nya elementarskola (new elementary school) in 1944 and at that point Signe Wennberg became a special-subject teacher at Ebba Lundberg’s högre läroverk för flickor (advanced school for girls). She retained that post until her retirement in 1953. An article published in Helsingborgs Dagblad in connection with her 50th birthday in 1938 highlighted how she interacted with her students in a way that went beyond simply educating them – “she also wanted to teach the youth to become clever, responsible members of society”.

Alongside her professional work Signe Wennberg was also actively involved in women’s suffrage both as a member of associations and in local politics. Shortly after she had settled in Helsingborg she joined the board of the Helsingborg division of Fredrika-Bremer-Förbundet and from 1921 until 1949 she served as its chair. She set up a specific discussion group within this circle in which women were invited to practice chairing techniques and to learn about the parliamentary system. Signe Wennberg wanted women not only to use their right to vote but also to play an active role in politics and so she felt it was necessary to train them to work alongside men. Her initiative was successful and the Lund circle, amongst others, also set up a similar discussion group.

Signe Wennberg was also politically active. She was involved in setting up Högerns kvinnoförening (right-wing party women’s association) and she served on its board. She was a member of Helsingborg town council from 1919–1929, and after the 1929 election she was the sole female member. In 1925, following the implementation of the new children’s welfare law, a children’s welfare agency was set up in Helsingborg. Signe Wennberg was a member of this agency from its inception.

Signe Wennberg was also active in many other associations. She served as deputy chair of Nordvästra Skånes pedagogiska sällskap (northwest Scanian pedagogical society), was a member of the board of modersmålslärarnas förening (association of native-language teachers), belonged to the local Helsingborg section of the Swedish Eldbegängelseförening (cremation association), as well as the Hemgården förening (a non-profit youth club) and she was on the board of Helsingborg children’s film club. She sometimes wrote articles for Fredrika-Bremer-Förbundet’s organ, Hertha. Her surviving letters, which can be found in the archived correspondence of the likes of Ellen Key, Kerstin Hesselgren, and Ellen Wadström, as well as in De kvinnliga rösträttrörrelsernas arkiv (the suffragette movement archives), testify to her serious activism and diplomatic skills. For many young women, including Ella Tengbom Velander who later became a municipal councillor and others, she served as a role model and mentor.

Signe Wennberg died in Helsingborg in September 1977. She was buried at Helsingborg crematorium. 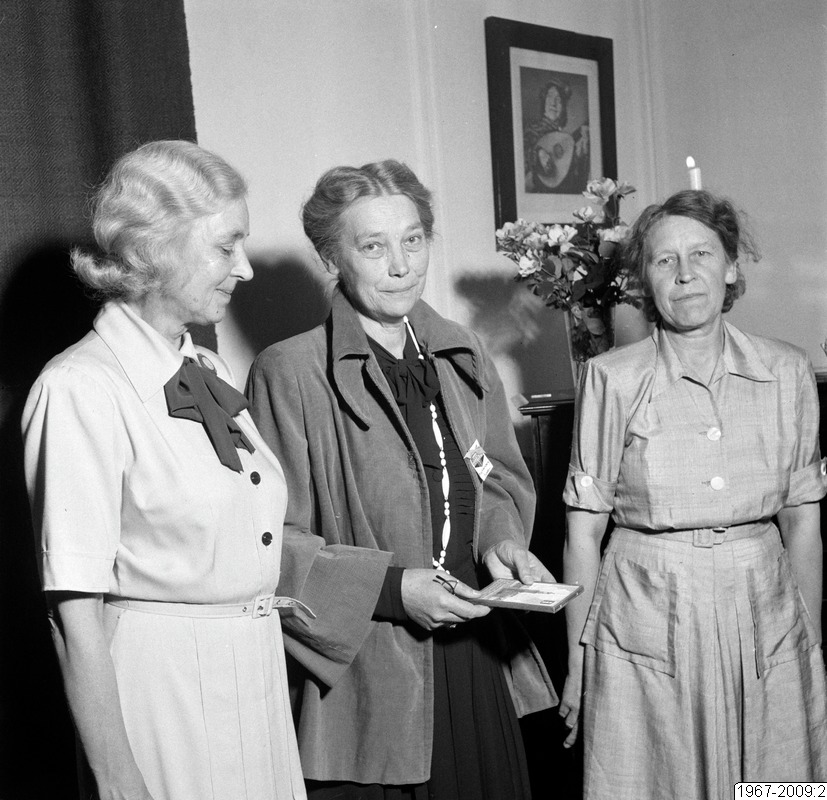 Signe Wennberg (center) with (from left) Sigrid Sjövall and Vesta Hallström at a meeting with the Fredrika Bremer Association in Helsingborg, 1949. Photo: Lindberg Foto. Helsingborgs museum (1967-2009:2)