Signe Höjer was an author, politician, state commissioner and peace activist. Her activities had a significant impact on Sweden’s post-war social and welfare policies, as well as on the development of Swedish international aid.

Signe Höjer was born in 1896 in Malmö. She grew up there as the youngest daughter in a relatively well-to-do manufacturer’s family that was deeply involved in the Evangeliska Fosterlands-Stiftelsen (Swedish Evangelical Mission). Although she graduated from school with excellent marks, her parents did not allow her to continue her studies at university. Instead she trained to become a nurse.

In 1919 she went to London intending to deepen her knowledge of social work. During her time there she made a brief visit to Paris, where she met the man she later married. Axel Höjer was a doctor who had gone to France in order to further educate himself on paediatrics and children’s health care. After they had spent one autumn together in London, while Signe Höjer was studying at the London School of Economics and they were both active in social reform circles, the couple returned to Sweden. There they married and settled in Hagalund in Solna, where Signe Höjer became a child-welfare officer whilst she was also working as a nurse at her husband’s doctor’s surgery. The couple also worked together on converting a local so-called “Mjölkdroppe” (health care centre for infants) into a broader and more proactive infant health care clinic inspired by the British example. This became a model for all Swedish child-welfare centres.

In 1926 Signe Höjer, and her four young children born during her years in Hagalund, moved to Lund. Axel Höjer had already moved there in order to begin his academic career. During her time in Lund Signe Höjer joined the city’s Social Democratic women’s club. She and her husband also became involved in the peace movement. Signe Höjer was locally and regionally active within both the Social Democratic women’s movement and Internationella Kvinnoförbundet för Fred och Frihet (IKFF, International Women’s Association for Peace and Freedom) during the later 1920s and early 1930s. She often travelled around the country to give public talks, and became nationally well-known.

Having spent several years in Lund and then in Malmö, the family returned to Stockholm in 1935. This time they settled in Ålsten, where Axel Höjer was employed as director general of the medical board. In Ålsten they fell in with the Social Democratic elite, a social bracket they themselves were becoming part of. This move presented new opportunities for Signe Höjer to advance within voluntary and political work, even at a national level. Her later career came to involve several spheres.

The first sphere of involvement was a decidedly intellectually-inspired form of activism. In 1936 Signe Höjer was appointed chair of the Swedish section of IKFF. Apart from a few years’ break in the late 1940s and the early 1950s she served as the chair of the Swedish IKFF right up to 1960. She also became involved with peace issues at an international level and during the Second World War she was active within Kvinnoföreningarnas utskott för mellanfolkliga frågor (KUM). Signe Höjer also held a central role within the Social Democratic women’s association – shortly after her return to Stockholm she was elected onto the association’s board.

The second sphere of Signe Höjer’s career, her work as an elected politician, was even more decidedly marked by her involvement with the Social Democrats. The Social Democratic women’s association in Bromma nominated Signe Höjer as their candidate for the 1938 Stockholm city council elections. She was elected and sat on the council until 1952, apart from the mandate period of 1946-1950 during which she had been manoeuvred out by political opponents. During the 1950-1952 period Signe Höjer was also a member of the city board (which was a precursor to the municipal executive board).

Signe Höjer’s political activism also brought her into a third sphere of activity, namely national commissions. Signe Höjer’s political achievements led to her becoming the chair of the special women’s delegation that was adjoined to the 1941 population commission. She was also appointed as a member of several other investigations and commissions: Statens utrymningskommission, Statens utlänningskommission, and a pan-Nordic commission to reform the Nordic citizenship laws. She was also the only population commissioner who was appointed a member of the 1946 ”Kommittén för den halvöppna barnavården” (a committee on child-welfare).

As an expert on population commissions, and on other areas she engaged in as a Social Democratic politician with particular expertise on women’s issues, Signe Höjer contributed to forming a new kind of social policy. She was also one of the most active proponents of formulating some aspects of social policy as a new field of family policy. The family policy that Signe Höjer advocated had health care as one of its priorities. Healthy and happy families were seen as both the goal and the means to engender the society she was fighting for. The term family policy did not, however, entail that parents should be equally responsible for the home and household. The new family policy was expressly pragmatic, and as mothers were still seen to be responsible for providing the family’s daily needs, family policies also continued to be shaped with a focus on women and motherhood.

From the 1950s onwards, having spent three decades in central positions in the Swedish social system, both Axel and Signe Höjer began to devote themselves full-time to international aid work, largely working in the former British colonies of India and Ghana. Axel Höjer held leading positions in the World Health Organisation (WHO) within the spheres of medical training and health care planning. Signe Höjer worked on her own initiative on peace issues, health care issues and social projects.

When she was almost 60 years old Signe Höjer began to write in connection with attempts at putting Swedish reform proposals into practise in India. She wrote a series of articles in order to raise funds for pre-school teacher training and for model childcare centres in Triandrum in southern India. One of her early ambitions was that the childcare centres should also provide child-welfare and family planning services. Signe Höjer’s work also resulted in her becoming a representative for the state of Travancore-Cochin on the Indian child-welfare council. Further, she set up more refined family planning projects within the state, which till then had been dominated by an opposition to birth control.

Signe Höjer’s projects can in many ways be seen as an extension of the so-called welfare-feminist tactic she had used in Sweden. This brought with it many normative aspects. For instance, the family planning project focused on making Indian families follow the western nuclear family ideal. However, while she was contributing to the spread of this ideal in her family planning work, in other contexts she acknowledged different types of family set-ups, including those based on polygamy. She was particularly fascinated by traces of the matrilineal system that she found in various places throughout the world. There were also other aspects which made her question the image of Sweden as an evidently more developed country.

Signe Höjer returned to Sweden in the 1960s and continued her international activities on various fronts. Amongst other things she participated in the “Sverige Hjälper” campaign as well as other efforts to promote Swedish enthusiasm for international aid, and in Rädda Barnen (Save the Children) campaigns against leprosy, as well as anti-nuclear weapon campaigns and efforts on behalf of international adoptions. She made a long-term meaningful engagement with Kommittéen för stöd åt Afrikanskt Konsthantverk (committee in support of African handmade art) by serving as its chair from 1961 to 1965. This committee supported, amongst other things, a project which combined art (textile art in particular) with handicraft work as occupational therapy. This was aimed at people who suffered discrimination during apartheid and, in time, the project became an important institution in the province KwaZulu-Natal (South Africa).

Whilst Signe and Axel Höjer worked as some kind of welfare state experts during their time abroad in Asia and Africa, when they returned home they became experts on developing countries. Signe Höjer’s membership in the strategically important so-called “U-landsberedning” (Government Commission for Aid to the Developing Countries) in the early 1960s reveals that she also had some official recognition as an expert in that area.

Signe Höjer also managed to continue her writing career with undiminished enthusiasm. From the mid-1950s and onwards she wrote a series of documentary and popular history books, some of which focused on her own experiences abroad, others looking at slavery, leprosy, and gender roles in the Tropics. Her bestselling work was a biography of the British discoverer Mary Kingsley. After Axel Höjer died in 1974 Signe Höjer began to write her own, as well as her family’s history, which was released as a series of books; between 1976 and 1988 she published eight volumes. Her activism on behalf of peace and against nuclear weapons – and in time against nuclear power – remained a lifelong campaign. Towards the end of her life Signe Höjer was awarded an honorary degree at Lund University, and this was a particular joy for her as she had never been able to undertake university studies. 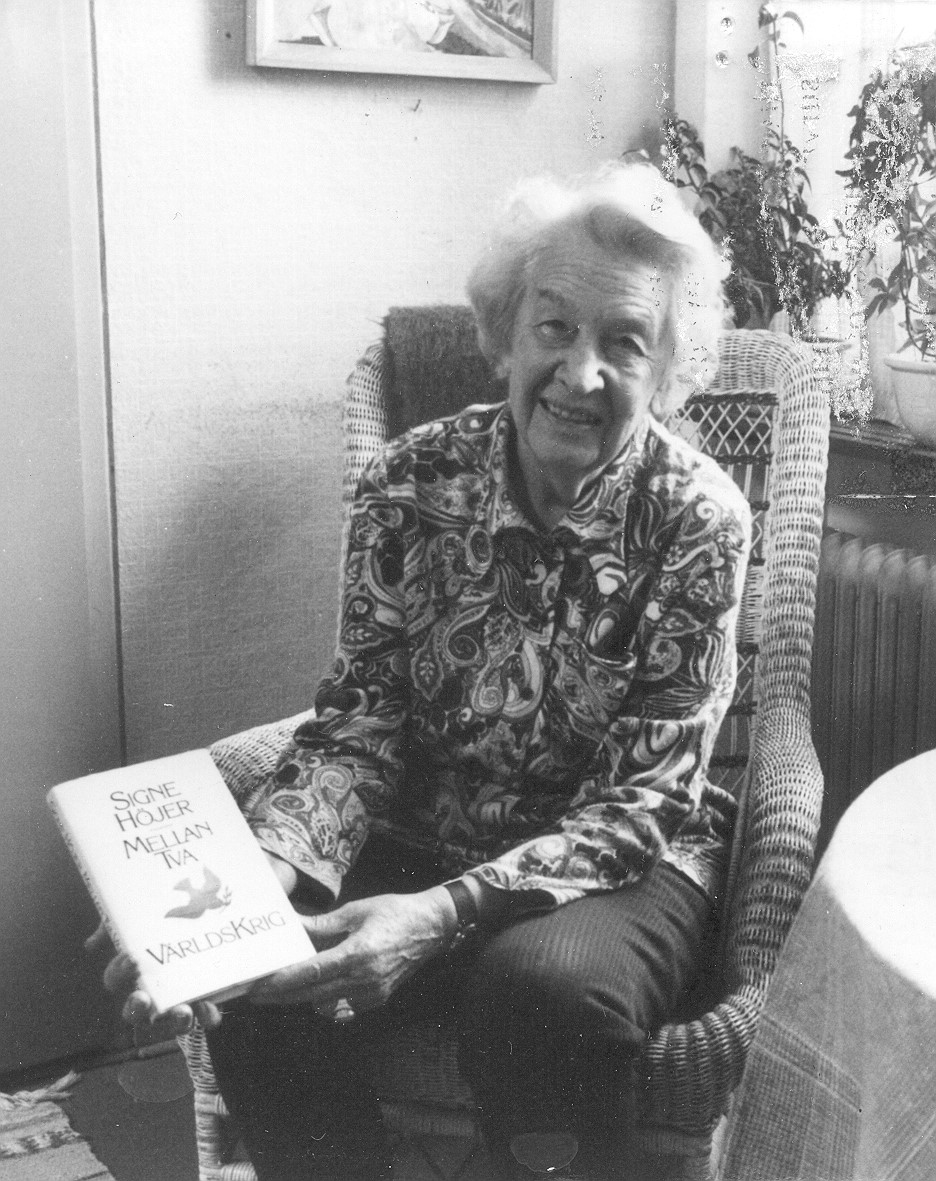