Sigrid Arnoldson was referred to as the third “nightingale of the North” during the 1800s, a successor to Jenny Lind and Christina Nilsson. She was the only one of the three to make gramophone recordings of her songs.

Sigrid Taube Marie Arnoldson was born into Hedvig Eleonora congregation in Stockholm in 1861. Her father, Carl Oscar Arnoldson, was a tenor and an opera singer, and her mother was Fredrika Dorotea, née Dag, who hailed from Karlskrona. Sigrid Arnoldson’s first singing teacher was her father. After he tragically committed suicide in 1881 she continued taking instruction through lessons with her father’s singing teacher, the controversial baritone Fritz Arlberg. He believed she was mature enough to begin performing in public following a year of giving her lessons. Sigrid Arnoldson’s first performance was held in Dalarö in August 1882. In November that year she sang, along with three established opera singers, at a concert held at Kungliga Musikaliska akademien (the Royal Swedish Academy of Music) where her repertoire included arias from King Charles' Hunt by Fredrik Pacius, Hertig Magnus och sjöjungfrun by Ivar Hallström, and The Marriage of Figaro by Wolfgang Amadeus Mozart.

Arlberg organised a tour for Sigrid Arnoldson in the autumn of 1883 which took in a number of larger bathing resorts and towns on the west coast of Sweden. Isidor Dannström, Arlberg’s older teaching colleague, became Sigrid Arnoldson’s patron before the year was out. Dannström willingly paid for Sigrid Arnoldson to continue her training with the mezzo-soprana Désirée Artôt. The latter had just brought her singing career to a close and was establishing herself as a singing teacher in Berlin. Sigrid Arnoldson spent two years in that German city taking lessons. Under Artôt’s guidance she learned the part of Rosina in The Barber of Seville, Violetta in La Traviata, and Marie in La Fille du Régiment. In the spring of 1885 Sigrid Arnoldson, along with her singing instructor and the instructor’s husband Mariano Padilla y Ramos, a Spanish opera buffa singer, undertook a concert tour. It took them to Vienna, Budapest, and Prague, where she made her public debut in the role of Rosina, performing in the summer theatres of the aforenoted cities.

Sigrid Arnoldson met Maurice Strakosch, a Jewish-Moravian opera impresario, by the autumn of 1885 already when Strakosch was in Stockholm. He had arranged three concerts at Kungliga Musikaliska Akademien in September 1885 on behalf of his protegée, Christina Nilsson. Following an audition with Strakosch Sigrid Arnoldson was immediately given a six-year contract at an unusually high salary and which generously allowed her to complete her studies with Madame Artôt at her ease. On 3 October Sigrid Arnoldson was hired by the Berlin Krollopera and on 18 October she announced her engagement to the Swedish artist Isak Gudmund Åkermark. At the time he was studying painting at Akademie der Künste in Berlin. However, their union was never formalised. On 12 December 1887 an announcement in the Svenska Dagbladet newspaper stated that Sigrid Arnoldson intended to marry Robert Strakosch, one of Maurice Strakosch’s sons who was also an impresario. Nevertheless, when Sigrid Arnoldson finally did marry in 1888 it was in fact to Alfred Fischhof, Maurice Strakosch’s nephew, yet another impresario. The next year their one and only child, a daughter, was born and she was baptised Ingegerd Louise.

Sigrid Arnoldson’s Parisian debut, singing the part of Mignon, took place in December 1887 at the Opéra Comique’s interim stage. This was after three concerts arranged by Maurice Strakosch in September had given Swedish audiences exposure to some samples of Sigrid Arnoldson’s newly developed skills taught by Madame Artôt. The six-piece repertoire she performed at each concert included duets from Rossini’s The Barber of Seville and Donizetti’s Don Pasquale, with Artôt’s elderly (according to reviewers) husband Mariano Padilla y Ramos , as well as the obligatory song called “14 år tror jag visst att jag var”. The other pieces were arias by Mozart, Rossini, Meyerbeer, and Saint-Saëns. One of the two pianists to accompany her, Hjalmar Meissner, was lauded for his playing whilst the other, the son of the composer Luigi Aditi, apparently bored the audiences with his virtuoso bravura-style playing.

In 1891 Sigrid Arnoldson was awarded the Litteris et Artibus medal. Previously that same year she had performed for three nights at Gothenburg’s Stora Teatern, at that time rented by August Lindberg. He was forced to take double entry fees for her appearances as Rosina in The Barber of Seville, Mignon, and Violetta in La Traviata. She then gave nine performances at Kungliga Teatern, during two separate periods. The next year, 1892, Sigrid Arnoldson made only one guest appearance, in Gothenburg, and her rendition of Mignon at Stora Teatern was received to great jubilation.

When Sigrid Arnoldson performed at King Oscar II’s 25-year jubilee concert in 1897 the king appointed her royal court singer and once again awarded her the Litteris et Artibus medal, this time adorned by a crown bedecked in glittering gemstones. In return she increased the number of her guest appearances at the Stockholm Opera to eleven sets of performances. At Sigrid Arnoldson’s third guest appearance at the Opera in 1902 she reduced her performances to seven, and the next time, in 1905, she again reduced the number to five, and in 1911 again to five. At her sixth guest appearance in Stockholm in 1913 Sigrid Arnoldson only sang on two nights. On her seventh and final appearance in 1916 she only sang once, performing the role of Carmen – a role she performed four times in total in Stockholm.

By the time she was 54 years old Sigrid Arnoldson thus had completed four sets of performances at Stora Teatern in Gothenburg and forty at the Stockholm Opera, singing ten different roles. Her most frequently performed role was that of Mignon from the eponymous opera by Ambroise Thomas. She only performed the title role in Leo Delibes’ Lakmé during four November nights in 1891, whilst Rosina from The Barber of Seville was only performed once in Gothenburg and once in Stockholm. Similarly, the Stockholm audiences only ever heard her once sing the part of Nedda in Leoncavallo’s Pajazzo as well as her rendition of Marie in Donizetti’s La Fille du Régiment, both of which were performed one night in 1911. She sang the part of Julia in Gounod’s Romeo and Juliet four times, Margareta in Gounod’s Faust five times, and Violetta in Verdi’s La Traviata five times, as well as once in Gothenburg.

During her 1909 visit to Stockholm she was granted an audience with King Gustav V but did not perform at the Stockholm Opera that time, settling for two concerts at Kungliga Musikaliska Akademien, accompanied by the pianist Georg Adler. In addition to Stenhammar, Sjögren, and Dannström she also sang songs by Robert Fischhof, Schumann, Wolf, Grieg, as well as arias by Mozart and Verdi. On 24 February 1910 she was elected into Kungliga Musikaliska Akademien as a foreign member, at number 223.

Her husband died in 1925, aged 71, following a stroke. Sigrid Arnoldson, nevertheless, kept her home open to visitors and to musicians resident in Vienna, right up until the ominous year of 1938 when Hitler suddenly altered the situation for her Jewish family, particularly given that her husband had also been a Jew. Sigrid Arnoldson’s return to Sweden occurred in stages. On 27 March 1938 Kungliga Musikaliska Akademien transferred her foreign membership to a domestic one and she became member number 624 of the academy. The king authorised the restitution of her Swedish citizenship on 9 December 1938 and on 30 January 1939 she finally returned to Stockholm where she settled at Sibyllegatan 18.

Sigrid Arnoldson was at this point 77 years old. Only one of her siblings was still alive, her brother Nils Johan, although he sadly died that same year. Their sister, the actress Fredrik Charlotta Arnoldson, had already passed away in 1904 and their mother had died at Danvikshem in 1927, shortly before she would have turned 90. Thus, Sigrid Arnoldson’s sole remaining family was her 50-year-old daughter, who had stayed behind in Vienna and along with all her Jewish relatives lived in fear of losing their lives. Somehow Sigrid Arnoldson managed to bring her daughter home to Sweden and the 1940 census records list her daughter, Ingegerd Louise Fischhof, as working in the home, “hemgöromål”. Her daughter intermittently performed as a singer under the name of Inga Fischhof-Arnoldson until her death in 1980.

Sigrid Arnoldson died in Stockholm in 1943. Her remains lie at Columbarium of Norra begravningsplatsen (the Northern Cemetery) in Solna. 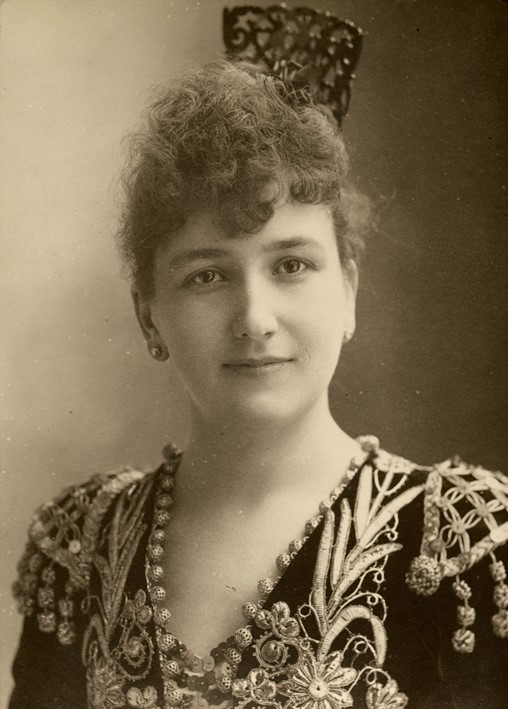