Sigrid Elmblad was a prolific author and translator. She moved in the sphere of the Nya Idun society established by Ellen Key.

Sigrid Elmblad was born into a family of artists. Her father was an architect and her mother, whose roots lay in Finland, was musically gifted. Due to her poor health Sigrid Elmblad was educated at home. When her father died in 1866 she came to spend a lot of time with her mother’s relatives in Finland and only returned to Stockholm in her later teenage years. In the early 1880s she began to publish her poems in various literary poem calendars under the pseudonym Toivo. In 1885 she was elected into the Nya Idun society and that same year she made her debut with a poetry collection called Vind för våg. Dikter och skisser. In 1887 she was the editorial secretary for Svenska Familj-Journalen and from 1887 to 1896 she was a contributor to Dagens Nyheter.

In 1888 she married Johannes Elmblad, an opera singer and performer of Wagner’s music, and they had two daughters together. Her husband’s job took them abroad for long periods. She lived in Berlin, Breslau, Prague, and became part of Wagnerian circles in Bayreuth. Her interest in Wagner resulted in her translating the libretto for The Ring of the Nibelung (Der Ring des Nibelungen) into Swedish as well as Parsifal and Mästersångarna i Nürnberg. She also translated romances by Schubert and Schumann, along with the text for the song Sankta Lucia.

After her husband’s death in 1910 Sigrid Elmblad settled permanently in Stockholm and spent her time writing for several newspapers and journals as well as translating books such as Henrik Ibsen’s Brand, Sigrid Undset’s Jenny and Romain Roland’s Pierre och Luce. She resumed her involvement with Nya Idun, where she served as secretary from 1912 to 1918 and as president from 1918 to 1921. In addition to the novels Mot sin lycka and Fru grefvinnan, written in 1897 and 1902 respectively, she published several stories and tales for children, some of which were illustrated by her daughter Saga Walli, and she also wrote a biography of Jenny Lind. 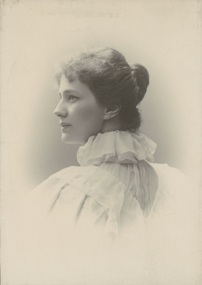