Sigrid Hjertén was an artist who was one of the leading figures of the Swedish modernist avant-garde movement. She was particularly acclaimed for her expressive use of colour.

Sigrid Hjertén was born in 1885 and grew up in Sundsvall. Her mother, Maria Rahm, belonged to a well-to-do family from the town. Her maternal uncle Johan Ulric Rahm was a successful merchant and member of the town council. Sigrid Hjertén’s father, Svante Hjertén, who was of a more modest background, was a lawyer who was also deputy-chief district judge. He was significantly older than his wife, who died of tuberculosis when Sigrid Hjertén was only 2 years old. In 1897 her father remarried, to Tora Östberg, who was the sister of the architect Ragnar Östberg. The family moved to Stockholm that same year. Two new additions arrived in the family, namely Sigrid Hjertén’s half-siblings.

It is generally believed that Sigrid Hjertén’s 1909-1911 period as a student at Henri Matisse’s academy in Paris was decisive in terms of her artistic development. However, the thorough artistic training she had previously gained at the Högre konstindustriella skola (advanced commercial arts school) in Stockholm – where her main subject was art – is of equal importance. Through Ragnar Östberg, Sigrid Hjertén was introduced to a circle of authors, architects, and artists including Carl Eldh who became one of her mentors. Eldh recommended Sigrid Hjertén for a post at Giöbel’s textile company, and there she designed patterns for tapestries. She exhibited her own work at the Konstindustriutställning (commercial arts exhibition) in Stockholm in the spring of 1909.

Sigrid Hjertén’s time in Paris marked her in several ways. She made lots of new friends within the Scandinavian artists’ circle which attended Matisse’s school. It was there that she also met the man she would marry, the painter Isaac Grünewald who was four years her junior. The couple married shortly after they returned to Sweden in the autumn of 1911 – and this was also when their son Iván was born.

During the 1910s Sigrid Hjertén was very active artistically. It was at this time that she became publicly recognised, not just in Sweden but also internationally. Together with Isaac Grünewald and other ‘Matisse-students’ she displayed her work in a series of exhibitions throughout Scandinavia. Being a member of the group which exhibited at Galeri Der Sturm in Berlin also made her more widely known internationally.

Big city life in all its aspects came to play a central role in the lives of modernist artists and city imagery quickly became a recurring theme in Sigrid Hjertén’s art. During the war years she painted the surroundings near Slussen (in Stockholm) which she viewed from her first studio near Kornhamnstorg, and later the view from her apartment on Katarinavägen. She reproduced the intense productivity down at Stadsgårdskajen (city docks) where goods were transferred off trains by cranes and loaded onto waiting boats in the harbour. What differentiates her paintings from similar images by Isaac Grünewald and Einar Jolin is the refined aerial perspective and her feeling for atmospheric effects. She was never afraid of using a powerful colour-scheme, as seen in Skördemaskiner i stadsgården and in Kajen, both from 1915.

Another theme in which Sigrid Hjertén was an innovator was her interior scenes of studios, cafés, and theatres. These environments were not just depicted as physical locations but also formed the scenery for modernist aesthetics, as in the painting Ateljéinteriör. This piece, with its ornamental scrolled lines against a kaleidoscopically-colourful surface clearly revealed the influence of Matisse. Sigrid Hjertén was not the only to develop this thematic scheme but she often had to take the blame for her artistic radicalism from her contemporaries. Male critics had fun setting her and Isaac up against eachother, as befitting the patriarchal spirit of the day. In order to denigrate her she was often referred to as ‘Mrs Grünewald’ despite her clear use of Sigrid Hjertén as her artistic identity and the fact that she signed all her paintings ‘Hjertén’.

The artistic couple had much in common: they were both expressionists and students of Matisse, and they both used similar colour-schemes. This was particularly true during the first period together in Stockholm when they often chose to work on the same themes. Sigrid Hjertén had already noted her interest in official paintings in the article ‘Modern och österländsk konst’ which she wrote for Svenska Dagbladet in 1911. It was probably her suggestion that she and Isaac should both enter the competition to decorate the wedding room at Stockholm Court House during 1912-1913. She withdrew herself from the competition after passing the first stage, perhaps because she did not want to compete directly against her husband. It was not until 1956 that her proposal was discussed by art historians, at which time it was judged to be the most radical and audaciously progressive of the entries. Her self-portrait from 1914 is particularly relevant in this context as it depicts her and young Iván against a background of Isaac’s winning entry for the back wall in the wedding room.

Several of her significant paintings from 1915-1916 reflect what she had learned from Matisse. Just like her role model Sigrid Hjertén wanted the emotions that her themes aroused to be expressed in the totality of the painting, through the decorative and musical unity of colours, forms, and lines. She abandoned her use of shaded colouring to create compositions based on large coherent colour blocks of clean and shiny rainbow tones. Warm colours were contrasted against cool tones. Her disregard for the central perspective was quite obvious and her use of varying angles of incidence give her images a certain tension.

Sigrid Hjertén often explored the fluid borders between art, fashion, and design. She was extremely conscious of how clothes could be used to generate a certain focus in portrayals of herself and portraits. Her full-body portrait of Isaac from 1916 presents him as an elegantly dressed dandy. Around the same time she also painted Leander Engström, a fellow artist who was a close friend of hers and Isaac’s for many years. He too came from Sundsvall, like Sigrid Hjertén. Although he is often described as outdoor man her expressive portrait depicts him as an urban dandy instead.

Sigrid Hjertén became an innovator of painting children. Her talent for observing and portraying her son Iván in all kinds of moments of everyday life led her to develop a new perspective on children. The group portrait entitled Barn, from 1914, which shows Iván surrounded by Isaac’s younger siblings, gained a lot of attention at the Swedish expressionist exhibition in Berlin in 1915.

Sigrid Hjertén was one of the few female painters of her era who focused on nude studies. Her 1916 painting entitled Den röda rullgardinen, influenced by German expressionism, is a major step away from the academic tradition of the ideal resting nude. Just like those expressionists who exhibited at Herwald Walden’s gallery in Berlin Sigrid Hjertén began to experiment with new techniques including linocuts, woodcuts, etchings and lithography. She also painted on tiles and ceramics. Her painted porcelain dolls and plates were considered to be novel and fresh by the critics of her day.

Sigrid Hjertén’s painting took a new turn during the 1920-1932 period when she and her family were officially settled in Paris. Although she exhibited in several displays in Sweden as well as internationally, she no longer formed part of a special group or circle as she had done during the 1910s. What now emerged as her major influences was the French culture and surroundings which began to dominate her artistic profile. Her paintings became more intimate. She often painted her local environment, landscapes, and portraits. Kocken and her portrait of her friend Hermine David represent two of her best works from that period. Colour remains important as seen in her still life Harlekin where she, like Picasso, is influenced by the very popular Italian Commedia dell’arte.

Sigrid Hjertén discovered landscape as a theme during her travels with her family across the southern coasts of France and Italy. In addition to scenes of nature she also painted views from windows and detailed studies of tropical vegetation. Her colour use is initially bright and light in tone but towards the end of the 1920s the background atmosphere in her paintings has changed and taken on a darker and heavier one. Some of her works express her nervousness and restlessness – reminding the viewer of van Gogh’s landscapes. She began to focus on exotic female portraits during her final period in Paris, and this was a popular subject in Paris of the 1930s.

In early 1932 the Grünewald family left Paris. It was during this relocation that Sigrid Hjertén became mentally ill and on 31 March she was admitted to Konradsberg hospital where she received the diagnosis of schizophrenia. After a year of artistic inaction she was released from hospital and returned to her painting with a violent freneticism. Although the fundamental characteristics of her art remained unchanged it seemed as though the manifestation of the illness and its first phase led her to release all inhibitions. She was inspired by her earlier themes and used them to create new paintings. The results were even more colourful and the brushstrokes were more intense. Kalkstensklippan i S:t Aubin, from 1921, served to inspire Kritklippor i Bretagne, which became loaded with a more dramatic atmosphere. Her earlier paintings of Stockholm views gave rise to new image compositions where, instead of portraying expansive views across the city and its dynamic activities as before, she now focused on the building cranes which tower threateningly in the foreground. They were painted in an intensely red-coloured paint.

Paintings such as Molnen drar förbi, Hotellterrassen i Grindelwald, och Schweizersjön, which were painted on a journey to Switzerland and Sicily in 1935, clearly testify to this third phase of Sigrid Hjertén’s artistry. We are now largely confronted with her inner landscape. Eventually, towards the end, her themes become increasingly dissipated. A diagonal play of lines spreads across the canvases like a grid. Her later paintings of flowers shimmer with an outlandish lustre and visionary force.

In the autumn of 1936 Sigrid Hjertén’s collected works were exhibited at the Konstakademi (academy of art) in Stockholm. At the same time she was admitted into Beckomberga hospital where she would remain until her death. Around 1937 she completely ceased to paint. That same year Isaac Grünewald filed for divorce in order to be able to marry his student, Märta Grundell.

Sigrid Hjertén died as a result of a failed lobotomy in Stockholm in 1948. 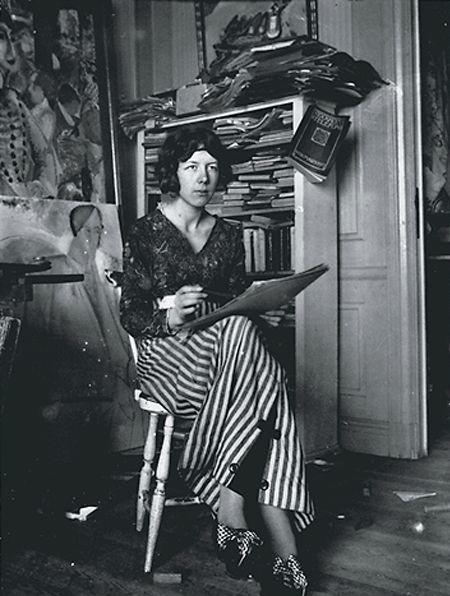