Sigrid Wiking-Olsson was a well-known skier of the early twentieth century. She successfully competed in both national and Nordic competitions and she was mentioned in the press on several occasions. She was a female pioneer who wore trousers instead of a skirt while skiing.

Sigrid Wiking-Olsson and her twin sister Tora were born in Katarina congregation in Stockholm in 1893. Their father, Anders Fredrik Wiking, was an engineer and a shipwright. He became the managing director of W. Lindberg Varvs- och Verkstads AB (Södra varvet, the south docks) at Tegelviken in 1894 and eventually became the owner of the company. Her mother was Alma Brüdigam. The family, which numbered four children, lived on Folkungagatan near Tegelviken, probably in Skeppsbyggmästarbostället, a building which dates from 1748 and is still extant, now a listed building. Around 1901, when Sigrid Wiking-Olsson was about eight years old, the family moved to the residential suburb Djursholms villastad just outside of Stockholm, partly to give the children better access to the outdoors. Their father was an avid sportsman and skier and he had designed the Djursholm ski area and ski-jump which was inaugurated in 1909. The children’s mother died in 1905, and their father subsequently remarried and had another two children. In 1919 Anders Wiking sold Södra varvet and moved to Seattle in Washington State, USA.

Sigrid Wiking-Olsson attended Djursholm coeducational school. Upon matriculting she applied to Tekniska skolan (now Konstfack, school of arts, crafts, and design) in order to develop her artistic skills, spending two years at that school. However, the foundations for her future career were laid by spending a year at Kungliga Gymnastiska Centralinstitutet (GCI) form 1912–1913. She graduated from the school in 1914 as a qualified physical education instructor and physiotherapist. That same year she was part of the gymnastics teams which performed public displays at the Baltic games in Malmö.

Throughout her youth Sigrid Wiking-Olsson displayed interest in and actively practised a wide variety of sports. She gained her swimming qualifications as a fourteen-year old, she skied at Värtan, competed in countless skiing races, and never missed Fiskartorpsdagarna (special events at a recreational area north of Stockholm). She competed in the Nordic games in Stockholm in 1909, had a ticket for the opening of Stockholm stadium on 1 June 1912, and attended the Olympic Summer Games in Stockholm that same year. In 1916 the journal Idun noted her victory in a racewalking competition, walking 25 kilometres in 3 hours and 28 minutes. Sigrid Wiking-Olsson was also one of twenty women who in 1917 competed for the newly established skiing merit badge for male skiers. To gain a badge one had to be able to ski 30 kilometres in under 3 hours and 15 minutes. Sigrid Wiking-Olsson completed the distance in 2 hours, 51 minutes and 15 seconds. The sports editor Erik Pallin commented on this achievement in his book entitled Skidlöpning för kvinnor och ungdom, published in 1919. A photograph of Sigrid Wiking-Olsson shows her with a broad smile and unusually lightly dressed: she has a light-coloured, open-necked and short-sleeved blouse and knickerbockers, stockings and knitted socks, and skiboots and is frequently referred to as one of the best skiers in Stockholm.

However, she was not only a pioneer amongst trouser-wearing female skiers. She has also been described as Sweden’s first female ski-jumper. The German journal, Sport im Bild, published a photograph of Sigrid Wiking-Olsson in 1909 as she was mid-air at the Fiskartorpet ski-jump in 1908. She was then aged fifteen and dressed in a light sporty shirt and a long skirt which snaked around her legs. Her hair was braided and decorated with large bows. The big ski-jump at Fiskartorpet at Norra Djurgården was constructed in 1904. Föreningen för skidlöpningens främjande i Sverige (later Skid- och friluftsfrämjandet, now Friluftsfrämjandet) had already laid the foundations for a skiing facility there in 1892. The skiing competitions held on the annual Fiskartorpsdagen formed a major attraction for local Stockholmers. From 1907 onwards women were also allowed to compete and Sigrid Wiking-Olsson was a regular visitor to Fiskartorpet.

Another photograph portrays Sigrid Wiking-Olsson and her twin sister Tora in the starting line-up for the ladies’ ski race at Saltsjöbaden in 1910. There Sigrid Wiking-Olsson is wearing wide knickerbockers and long stockings. One of the Stockholm newspapers described the sisters as pioneers because they belonged to the early cohort of women skiers who competed in trousers. The author of the report imagines that these women had been inspired by an article published in the annual På Skidor journal, published by Föreningen för skidlöpningens främjande i Sverige. The author queries whether, had it not been for that article which mentioned that Swiss women skied in trousers, the sisters would have had the “moral courage” to ski in such practical apparel. He further predicted that knickerbockers and “sweaters” would become normal skiwear. Sigrid Wiking-Olsson was ahead of her time in many ways, and she had already been photographed in 1907 wearing a “sweater”.

After completing her training at GCI Sigrid Wiking-Olsson met her future husband, an Englishman named Harold Olsson, whose paternal grandfather hailed from Värmland. He too had qualified as a physical education instructor and physiotherapist at GCI. Harold Olsson returned to Great Britain on the outbreak of the First World War in 1914 and signed up for military service. During the war he was responsible for physical training within the British Army at Aldershot, a place often referred to as the “Home of the British Army”.

Before the end of the war Sigrid Wiking-Olsson travelled via Oslo to London. On Boxing Day 1917 she married Harold Olsson. The couple settled in England where they opened a Swedish institute of physical education. Having made this move Sigrid Wiking-Olsson was no longer able to engage in winter sports. However, in 1929, the family moved to Sweden and settled in Viggbyholm. Both Sigrid Wiking-Olsson and her husband became employed as teachers at Viggbyholmsskolan, which was the first boarding school in Sweden. Harold Olsson later returned to Bath in England where he ran a physical education institute. He died in 1957.

During a random visit to Djursholm in the spring of 1964 Sigrid Wiking-Olsson came across the recently burnt-down Djursholms Idrottshus, which dated from 1898. She subsquently wrote an essay on Idrottshuset which was very well-received by both the parents and the students of the school at which she taught. Although no traces of Sigrid Wiking-Olsson’s paintings have survived she did, aged 78, have an exhibition of her mountain landscape water-colours at the Tre små rum gallery on Arsenalsgatan in Stockholm, in the period between winter and spring 1970–1971. She received favourable reviews from art critics.

In the year following Sigrid Wiking-Olsson’s death her accounts, photographs, and belongings were donated to Nordiska museet. In addition to the innumerable sports-related items there are also items connected to the suffragette movement and the temperance movement.

Sigrid Wiking-Olsson died in 1975. She is buried at Djursholm cemetery. 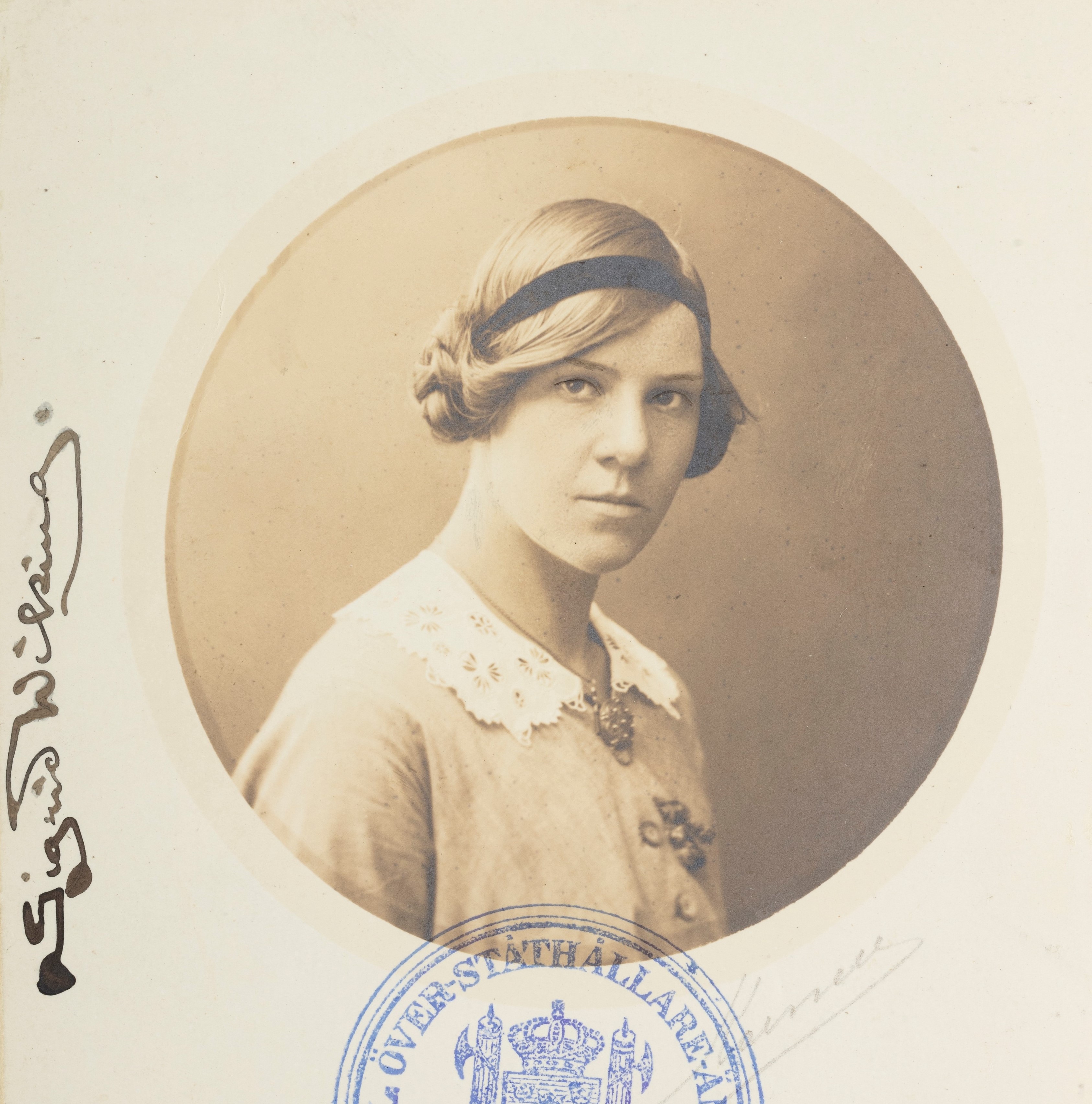