Sigrid Leijonhufvud was an author who was also active within the women’s movement. Her most significant societal contributions were made in the form of her published biographies.

Sigrid Leijonhufvud was born in 1862. She was the daughter of Countess Ebba Ulrika Sparre and her husband Count Axel Hjalmar Leijonhufvud , who was also a colonel and royal chamberlain. Sigrid Leijonhufvud was thus born into the Swedish nobility. After receiving a basic education from private tutors she gained her school-leaving certificate in 1883 at the Lyceum for girls in Stockholm. Following a short period at the new högskola (college) in Stockholm she then enrolled at Uppsala university where, from 1885 to 1888, she mainly studied languages, art-history and literature. She also undertook a lengthy educational tour of Europe. Her professional career began in earnest in 1892 when she began to teach languages at the Åhlin school in Stockholm. From 1901 she also served as the librarian at The Royal Swedish Academy of Letters, History and Antiquities (KVHAA).

Given that Sigrid Leijonhufvud’s father was a professional soldier he was not particularly interested in his daughter’s academic ambitions. She was the only daughter within a large family comprising five sons and three daughters to gain a higher education. This was probably due to the early support she received from her aunt, Sophie Adlersparre (Esselde), the founder of Fredrika-Bremer-Förbundet (association) in 1884, who was also interested in women’s history. It was through her aunt that Sigrid Leijonhufvud became exposed to the ideas of and leading individuals within the women’s movement of her era.

The inspiration she received from Sophie Adlersparre sparked off Sigrid Leijonhufvud’s writings. Her first major commission was to complete Sophie Aldersparre’s biography of Fredrika Bremer in 1896. Many years later, 1922–1923, she also published her own biography of Sophie Adlersparre, a work which not only illustrates traditional class-based society but also the accelerated political and social developments of the 1800s, particularly with regard to women. In 1910 she also published Sophie Adlersparre’s correspondence with the author Victoria Benedictsson – who was also known as Ernst Ahlgren.

Sigrid Leijonhufvud focused, as a writer and a researcher, on biographies, usually within the framework of the noble cultural milieu in the 1600 to 1800 period. Many of these individuals were connected to her own family history. She was inspired to develop this line of work by her maternal grandfather, Gustaf Adolf Sparre, who was a medievalist and whose Sköndal estate she often visited, along with her own work at the KVHAA library and its large collection of manuscripts. She was similarly inspired by the historian Ellen Fries, who also belonged to Sophie Adlersparre’s personal network. Sigrid Leijonhufvud was able to continue some of her ongoing research and publication work, particularly her 1908 work on Agneta Horn. The national spirit of the day had also generated an increased interest in biographies.

Sigrid Leijonhufvud’s family background certainly opened doors and enabled her to study many individual manuscripts in situ. This influenced her 1902 work, entitled Ur svenska herrgårdsarkiv, the first of her own publications, which focused on the Carolinian period and ‘frihetstiden’ (the age of liberty). Despite not being a proper historian to trade Sigrid Leijonhufvud was still conscientiously objective and meticulously scientific in her use of methodology, source referencing, and indexes. Further, she had a remarkable aptitude for style and sensitivity to both psychology and human drama, making her somewhat of an early popular historian. She had more time for her writing from 1909 onwards – this was the point when, following her father’s death, she decided to give up teaching.

Sigrid Leijonhufvud’s deep interest in archives naturally led her not only to produce printed versions of original material, but also to generate several distinct editions of such material. Later she would focus on Carl Gustaf Tessin, a personal embodiment of the Swedish ‘age of liberty’ through the way he combined politics, culture, and refined fascination for all things French. She vividly portrays that era and its trappings, along with the women in his life. During the 1917–1933 period she released four volumes which were largely based on diaries and correspondence, and complemented by a few publications of acts. Sigrid Leijonhufvud also wrote reviews, shorter articles, and notices of archival discoveries in publications such as Fornvännen, Fataburen, Karolinska förbundets årsskrift, and Personhistorisk tidskrift.

Sigrid Leijonhufvud was a close friend of the children’s book writer and artist Ottilia Adelborg who was an energetic champion of Swedish traditional crafts. This too was a popular theme of the day and sat well with Sigrid Leijonhufvud’s focus on cultural history. Lydia Wahlström, a historian, writer, and suffragette, was also a member of this circle of friends. They all shared a what was a fundamentally conservative attitude to life. She maintained a long-term relationship with the sculptor Sigrid Blomberg.

Sigrid Leijonhufvud was a member of the Fredrika-Bremer-Förbundet board for a long time. In addition to this role she published her own contributions to the association’s journal, Dagny - which from 1914 onwards was renamed Hertha. She was also active in the Nya Idun society Ellen Fries and others founded in 1885 for professional working women and for which was responsible for the 1935 publication of a book in honour of its 50th anniversary. She had already co-authored a bibliography of women within Swedish literature in 1893. She collaborated with the composer Elfrida Andrée and provided the text for the introductory cantata at the Världskongress för kvinnans politiska rösträtt (world congress for women’s suffrage) in Stockholm in 1911.

It was Sigrid Leijonhufvud’s work on Tessin in particular which generated substantial and positive attention at a time when awareness of the 1700s and its cultural expressions were becoming more visible and valued. Indeed, her publications served as a contributory factor to this awareness. In 1918 she was elected into Samfundet De Nio (The Nine Society), and in 1922 she was awarded the royal merit called Litteris et Artibus. Further, she was given an honorary doctorate from Lund university shortly before her death in 1937. She was also keenly interested in literary fiction and art and her home in Stockholm became a meeting place for those who were like-minded.

Sigrid Leijonhufvud was a traditionalist who was strongly interested in her family history and aware of her social standing, but was also able to clearly see the necessary changes required within society. As a frequent letter-writer she developed an extensive contact network over the years, not just with other researchers in the field but also within the women’s movement. Her publications focused heavily on women’s roles and the significance of women in the environments which she portrayed. 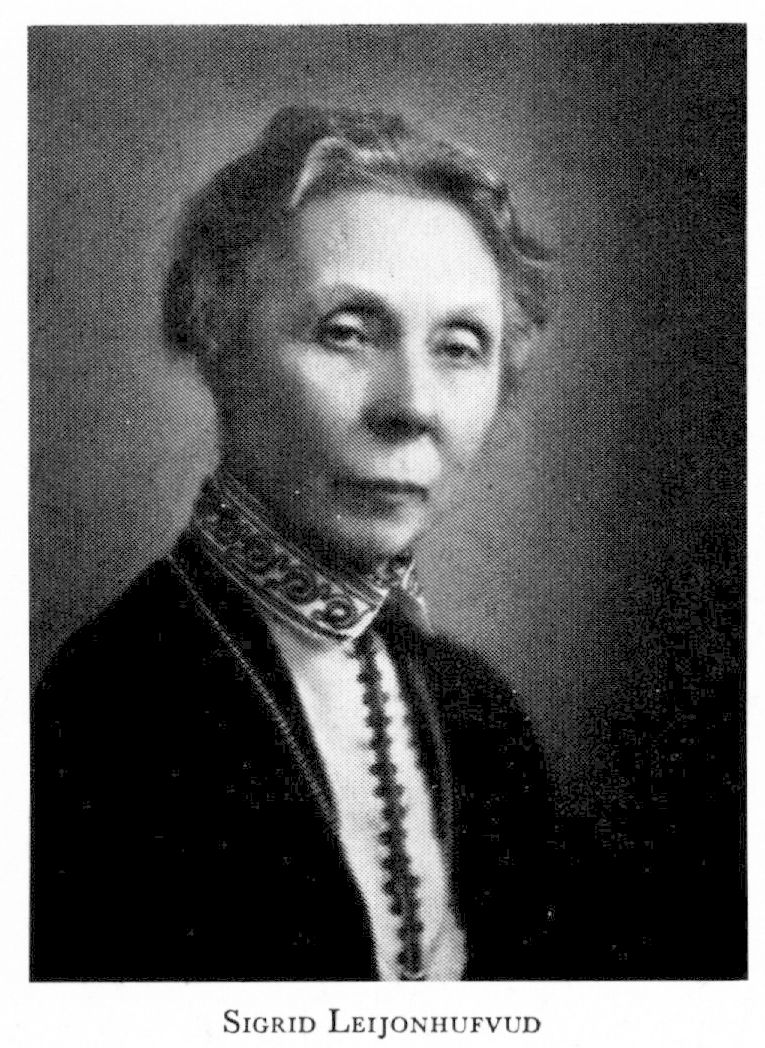