Siri Öhngren Hallström was a liberally minded elementary school teacher who completed her Licentiate examination at Stockholm college, later university, and thereafter worked as a lecturer in biology, with hygiene and geography, at the elementary teacher training college in Umeå.

Siri Öhngren Hallström was born in 1883 in Själevad parish in Örnsköldsvik. She was the eldest daughter of the merchant and liberal member of parliament Henrik Öhngren and his wife Eva, née Augustin. The couple had seven more children, six sons and one more daughter. Siri Öhngren Hallström’s childhood was characterised by the social engagement of first and foremost her father. When women’s right to vote was debated in the town in 1908, it was Siri Öhngren Hallström who led off with an introduction on “the just claims of women”.

After some years at school in Örnsköldsvik, Siri Öhngren Hallström moved when she was 13 years old to Stockholm to attend the Palmgrenska School where she matriculated in 1901 with the school’s top marks. She quickly acquired a professional education at the elementary teacher training college in Umeå where she qualified in 1902, after which she spent eight years working as a teacher in various schools in Örnsköldsvik. As from the autumn of 1910, she studied natural science at Stockholm college. She took her Licentiate in 1917 in biology and geography, and in September 1919 she was appointed by Kungl. Maj:t (Royal Majesty) to be a subject teacher and lecturer in biology with hygiene and geography at the elementary teacher training college in Umeå. She was head of the biology department during the 25 years she worked at the college, with great responsibility for her students.

Siri Öhngren Hallström was now and then on leave for various assignments. In September 1921 she spent a month in Lycksele in Lapland to visit various folk high schools and in 1922 she undertook a study trip to England. She was very concerned in the business of the students’ textbooks and was asked in 1925 by Norstedt’s publishing company whether she would like to write a textbook on biology, a project that came to nothing, however, on account of illness. Hygiene including sex education also engaged her interest and during the periods she was on sick leave, she worried about whether the students were receiving adequate tuition. She was also involved in the school garden. During her studies, she had built up her own herbarium and she also had access to an extensive collection of insects of which she took great care.

Siri Öhngren Hallström was politically engaged as the chairwoman of the liberal women’s group, Frisinnade kvinnor in Umeå. She was also a member of the lecture association Minerva for which she was the chairwoman from 1923 for a number of years. In 1922, a local group of Fredrika-Bremer-Förbundet was founded in Umeå. Among those convening the meeting was Siri Öhngren Hallström who was elected to be chairwoman in February 1923. She was elected as representative to the association’s annual general meeting in Stockholm in 1934 and was a board member during the years 1937–1940, after which she refused re-election.

Siri Öhngren Hallström married the well-known Umeå lawyer Sven Hallström at a civil ceremony in Uppsala town hall in 1924. He was very right-wing and later, during the 1930s, was one of Umeå’s organised nazis. The marriage brought her responsibility for his five children whose mother had died in 1919 when the youngest child was only two years old. Despite her new marital status and sudden parenthood, Siri Öhngren Hallström was able to continue both work and involvement in associations since the Hallström couple had a housekeeper, housemaid, and nanny at home.

Siri Öhngren Hallström was on leave during the spring term 1939 and resigned as chairwoman of the local section of Fredrika-Bremer-Förbundet the same year after a period of severe illness. Her health had been frail with several chronic illnesses for a long time. In November 1942 Siri Öhngren Hallström was found unconscious in her home after an accident involving a terrible fall. Her right hand remained seriously damaged after the fall and she was affected by problems with both eyes, which reduced her capacity to work.

Siri Öhngren Hallström died on 23 December 1944. The funeral took place in the Heliga Korset chapel at the Woodland Cemetery in Stockholm. In August 1945, the urn was transferred to the Northern Cemetery in Solna and the Hallström family grave where Sven Hallström’s first wife already rested. 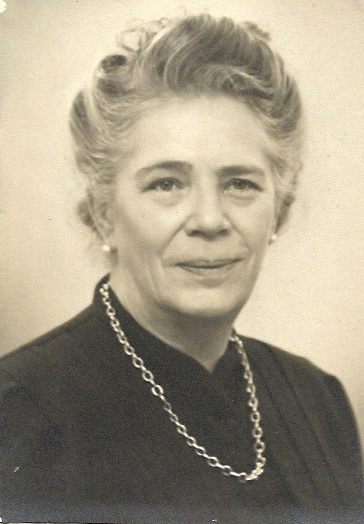