Siri Rathsman was a painter, a graphic artist, and an illustrator. She also worked as a journalist and from 1921 she was the Paris correspondent for Göteborgs Handels- och Sjöfarts-Tidning, under the pseudonym of Comtesse Belloni.

Siri Rathsman trained at Carl Wilhelmson’s school of painting in Gothenburg and then continued her training at the Göteborgs Musei Rit- och Målarskola (Gothenburg Museum School of Drawing and Painting; now known as Konsthögskolan Valand – Valand art college), where she was taught by the colourist Birger Simonsson. In 1917 she, and some of her course mates, made their way to Copenhagen in search of employment and to experience life on the Continent. After travelling in Italy and Mallorca, she made her way to Paris in 1920 where she spent a year at the Académie Moderne being taught by Raoul Dufy and Othon Friesz. She had a studio on rue Bellini.

After completing her training Siri Rathsman earned her living as a journalist. She initially wrote for Sundsvalls-Posten, but in 1921 she became the Paris correspondent for Göteborgs Handels- och Sjöfarts-Tidning. She wrote under the pseudonym of Comtesse Belloni, a name inspired by her studio address. She reported on events within the arts in Paris, which at that time was still the global art capital. The newspaper also published her fashion drawings.

Siri Rathsman’s paintings belonged to the school of realism, which was the trend at the time, and became known in art history as “the new objectivity”. Motifs tended to comprise interiors, cityscapes and portraits. Siri Rathsman, who was an intellectual, linguistically talented, and politically active, felt at home in the avant-garde circles of Paris in which she, particularly as a woman, could enjoy a more liberated existence than what was permitted by convention-dominated family life at home in Sweden. The artist Otte Sköld believed that Siri Rathsman “was viewed as talented as well as a pioneer with regard to cutting her hair short, and that she was probably quite radical for a woman who had been brought up in a home with a French governess.”

During the 1930s Siri Rathsman produced graphic art and exhibited in the same Parisian circles as her colleagues Max Ernst and Yves Tanguy. In the meantime the political and cultural climate in Europe was becoming increasingly restrictive following the Nazi’s rise to power in Germany in 1933. The 1938 “Entartete Kunst” exhibition was decisive: it toured Germany displaying the very type of modern art hated by the Nazis and which they termed as degenerate.

Siri Rathsman took an interest in those artistic forms of expression which were subject to the censor: abstract non-figurative paintings and sculptures, which she herself now began to experiment with, mainly in deep colour schemes with strident colours. This style differed radically from the one she had worked in for the previous three decades, particularly from the objective realist portrayals of the 1920s.

Siri Rathman moved to Vichy in 1940, when it had become impossible to stay on in Paris, and reported from there on the tense situation of the Nazi occupation and the persecution of the Jews. She, along with other non-French journalists, was expelled from France in 1943. She then came to Stockholm. That year she published a book called Vichy förlorar spelet. Intima skildringar från det slagna Frankrike. The war also left its mark on her artwork, including her painting entitled Bombräd över London from 1944.

By 1945 Siri Rathsman had already moved back to Paris in order to continue painting. She displayed her art both there and in Sweden, at galleries in Gothenburg and Stockholm. She made her definitive public breakthrough with a retrospective exhibition in 1951 at the Swedish-French art gallery, which included her works dating from 1919 onwards. The previous year, in 1950, she had been awarded the French Legion of Honour in recognition of her journalism. She did not return to Sweden until 1967.

Siri Rathsman died in 1974. She is buried at the Norra cemetery in Solna. 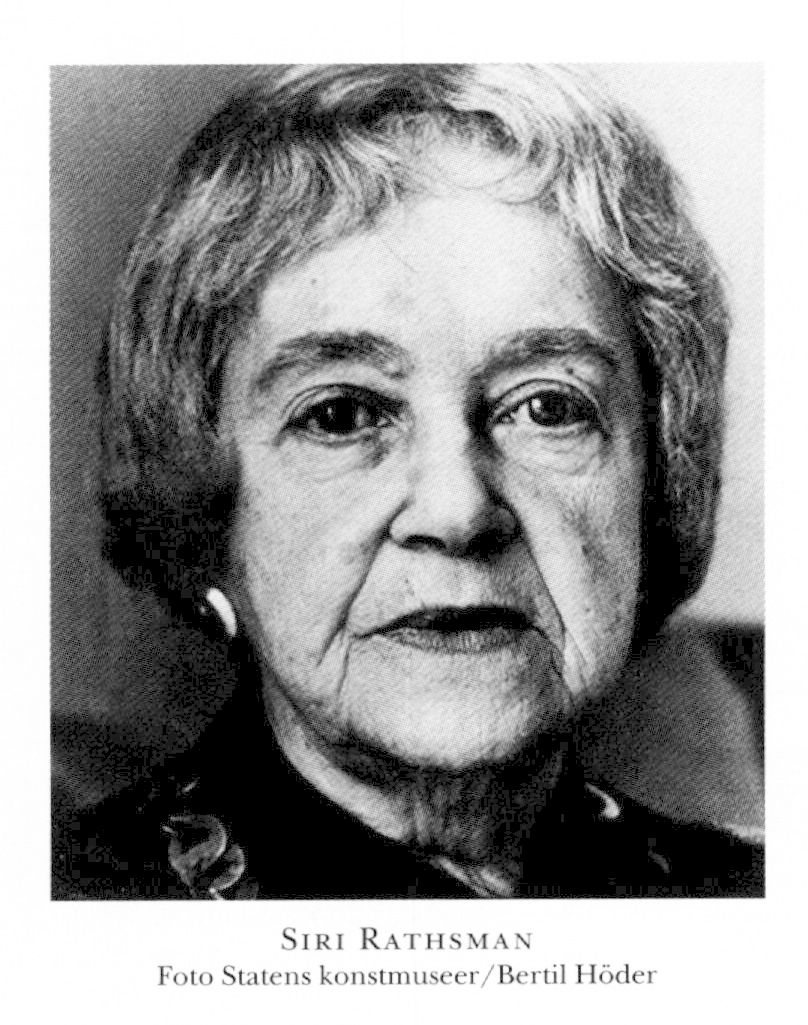