Siv Ericks was for many years one of Sweden’s most popular comediennes, revue artistes and actresses. She appeared frequently on stage and film for almost 60 years.

Siv Ericks was the daughter of Nils Eriksson, a master barber, and his wife Annie. She was born in Oxelösund in 1918 and was given the name Siv Eriksson. Her father was a revue writer apart from his profession, and Siv Ericks made her debut as an eight-year-old in 1926 in one of his local revues in Oxelösund. At the age of 16, she joined a theatre company in Örebro and toured after that with Martin Sterner and Folke Walder until 1938. For a time, she studied theatre arts with the actress and speech therapist Karin Alexandersson, who taught speech and voice care at the Dramaten theatre school in Stockholm.

In 1939, Siv Ericks joined Vasateatern in Stockholm and remained there until 1942, when she took parental leave. Siv Ericks was married to Albert Essy-Ehsing, a Russian businessman in 1942—1967 and they had one son, Percy. She tired of her role as housewife and longed to get back to the theatre. Her return took place in 1950 in a revue on the theatre boat in Gothenburg, with Douglas Håge, who had lured her back to the world of revue. Later came an engagement at Scalateatern in Stockholm in 1951—1952. In 1953—1957, Siv Ericks took part in her first series of Kar de Mumma revues, at Blancheteatern in Stockholm. She was to return to them later in 1970—1972, then at Folkteatern in the same city.

Siv Ericks made her film debut at the age of 21 in Per-Axel Branner’s comedy Rosor varje kväll in 1939, when the male role was played by the big star Max Hansen. It was in this context that he suggested the artist name Ericks, which she adopted during the filming. She was simultaneously engaged in comedy at the Klippan summer theatre in Stockholm. This was the first occasion that she was mentioned as Siv Ericks in the press. Her debut role turned out to be her only main role in a film, however. Instead there were many small but memorable parts in about 60 films during a period of 55 years. This was possibly because Siv Ericks did not fit into the narrow type of the young girl who was supposed preferably to be mild, sweet and unobtrusive. Siv Ericks certainly had what it took, but was probably also too funny, original and self-contained to suit the roles tailored by the film companies to the young actresses they intended to launch as stars.

During the 1940s, Siv Ericks only performed in one or two small roles, but during the 1950s she became more active in film. Ericks mainly repeated some virtuoso specialities that they reserved especially for her. She had at that point namely found her niche as a kind of comedy pearl grown and refined in the Kar de Mumma revues. She played lethargic, gullible and rather silly society ladies and directors’ wives, preferably with large, floaty hats and conspicuous accessories and outfits. She was “camp” before that expression had been launched in Sweden, and she captured that style with parodic perfection. Siv Ericks also filled the niche of Swedish film’s best receptionist, secretary and telephonist, slightly slack and vulgar but with just the right edge to her lines. Minor roles that might easily have become periferous and banal were transformed by Siv Ericks into small fireworks displays in which she almost outshone the main stars and became the main attraction for a second. Siv Ericks was electrifying and powerful, like a Swedish Betty Hutton. She dared to be funny and exaggerated at a time when actresses usually wanted to be gracious and sophisticated.

In one theatre programme, Siv Ericks was once introduced as “a successful cross between Tollie Zellman and Eva Dahlbeck”. Even if the comparison was not spot on, it says something about the stately, cool blonde with a natural talent for being hysterically funny, even if she only rolled her eyes, chewed gum or opened her mouth. Tollie Zellman and Siv Ericks shared the ability to transform a trivial line in a script into a kind of multi-layered, multistage rocket just by unique emphasis and pausing. They digested each line and dragged out the comical bits.

Siv Ericks had yet another hallmark, her nasal, somewhat forced high voice with its languorous enunciation, which perfectly suited the comic roles she created. This image was a perfect disguise for the calculating nature and the biting response that often hid behind the silly little goose camouflage. Some examples of her comically pompous upper-class caricatures preserved on film are consul’s wife Braxenhielm in Skorpan in 1956, consul’s wife Sluggstedt in Fly mej en greve in 1959, and major’s wife Morgonkröök in 91:an Karlsson muckar (tror han) in 1959.

Among Siv Ericks’ other films may be mentioned Stackars Ferdinand in 1941, Söderpojkar in 1941, Lille Fridolf och jag in 1956, Ratataa in 1956, Med glorian på sned in 1957, Flight of the Eagle in 1982, and Fanny and Alexander in 1982. Siv Ericks also played Ulla Winblad in Lockfågeln in 1971, co-starring with Lauritz Falk’s Bellman. She also played a couple of every-day, realistic mothers in the Astrid Lindgren films Rasmus, Pontus och Toker in 1956, and Bill Bergson Lives Dangerously (Mästerdetektiven Blomkvist lever farligt) in 1957, as well as other dramatic roles as in the TV series Hedebyborna in 1978—1982. She also played in TV series like Sweden’s first sitcom Niklasons in 1965, Pippi Långstrump in 1969, Skärgårdsflirt in 1972, The House of Babel in 1981, and in the Christmas Calendar Tam Sventon, Private Detective (Ture Sventon, privatdetektiv) on Swedish Television in 1989.

Her greatest and most popular victories were probably anyway won when Siv Ericks performed during her many years as a revue and farce actress on stages in Stockholm and Gothenburg, as well as on tours. First of all, she was a magnificent Kar de Mumma primadonna. She participated in eight Kar de Mumma revues all in all through the years. At the end of the 1950s, she also began an over 20-year-long collaboration with Gösta Bernhard, in which they performed together in Gothenburg, Stockholm and on tours. The years 1960—1972 were spent by Ericks with Bernhard at the Lisebergsteatern in Gothenburg where they performed comedies like Äktenskapskarusellen in 1960, Hallå skojare in 1961, Gungstolen in 1963, Harskramlan in 1964, Himmelssängen in 1965, Oss kaniner emellan in 1967, Plaza Hotel in 1969 and Privatkiv in 1972. She also collaborated in the 1973 casino revue Kom till Casino at the Intiman theatre, which was preserved as a revue film with the same name in 1975. Siv Ericks and Gösta Bernhard also performed pub shows and made radio and TV programmes together. Another person she often collaborated with was Hasse Ekman, in whose film comedies, plays and so on Siv Ericks regularly featured, not seldom in combination with Gösta Bernhard.

Siv Ericks was also a revue primadonna in Hagge Geigert’s shows, for example Utan en tråd at Lisebergsteatern in 1975. During the 1970s and 1980s, during Per Gerhard’s regime at Vasateatern in Stockholm, she collaborated later in several farces and comedies, Charleys tant in 1977, with Sven Lindberg; Min fru går igen in 1978, with Stig Järrel and Hjördis Petterson; Spanska flugan in 1981 together with among others Carl-Gustaf Lindstedt and Inga Gill; Rampfeber in 1983 with Inga Gill and Gösta Bernhard; as well as Gamle Adam in 1984 and Leva loppan in 1986 with Carl-Gustaf Lindstedt. They were all really long-running.

Apart from all this, Siv Ericks frequently participated in radio programmes and also recorded a few singles, among them the 1940s wartime classic “Min soldat”. For the radio she participated in among other things radio plays and the humour programme Goddag yxskaft, a satire on the popular radio programme Tjugo frågor with Karl-Arne Holmsten, Gunnar Björnstrand and Martin Ljung.

Siv Ericks found time during her extensive career to collaborate in a large number of revues, plays, TV productions, radio programmes and films. During this time, she played a flurry of foolish and silly ladies, always very varied and with comic timing and bite. Siv Ericks was the opposite of inconspicuous; she was extremely colourful, with a potent charisma and stage personality. She was awarded the Karl Gerhard honours prize in 1988.

Siv Ericks died at Onsala in 2005. She lies buried in Onsala Cemetery. 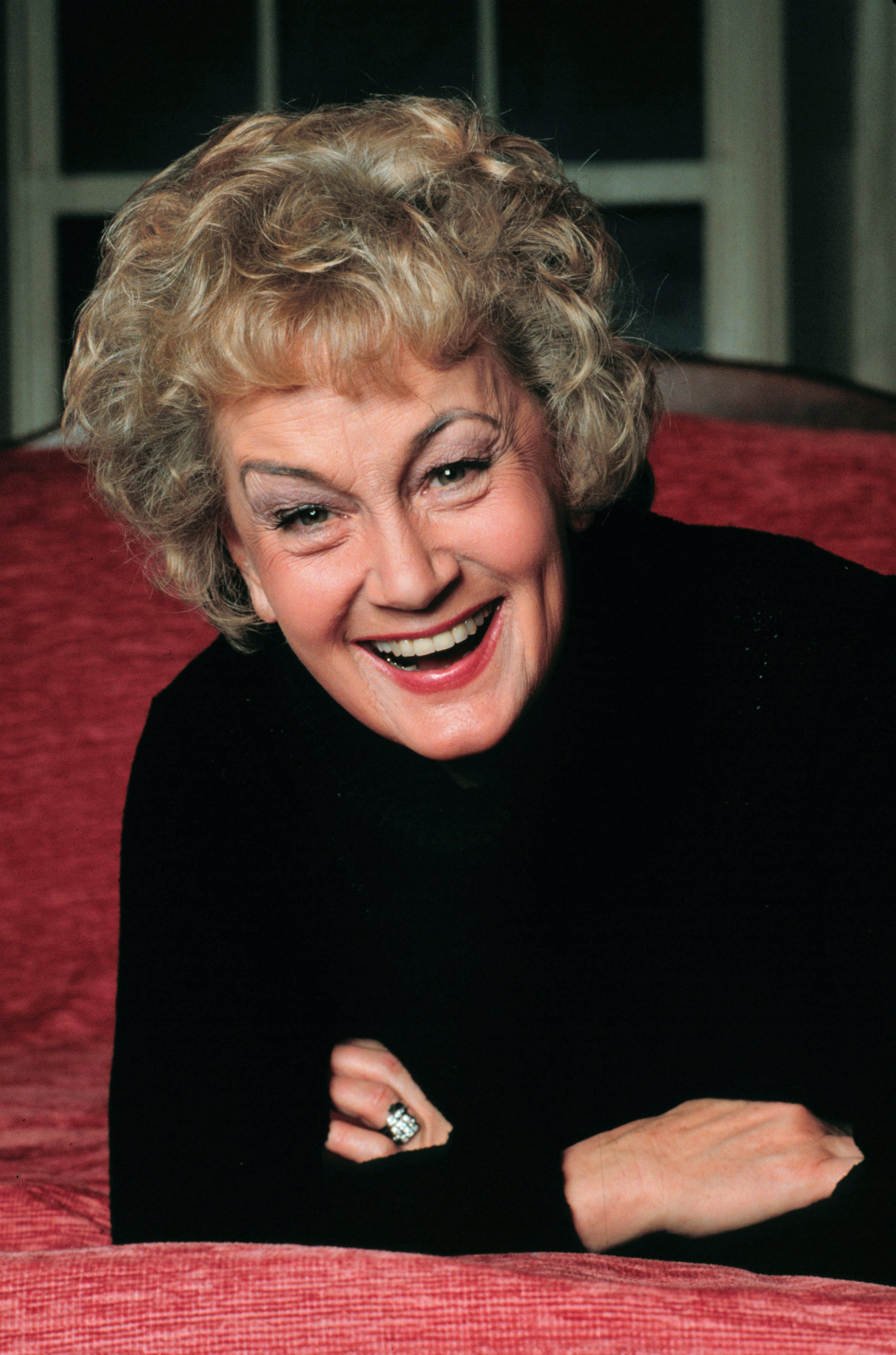