Princess Sofia Albertina was politically active during the late 1700s and the early 1800s.

Sofia Albertina was born in 1753. She was the youngest child of King Adolf Fredrik and Queen Lovisa Ulrika. She never married and never had any children. As the sole daughter, and an unmarried one, she was particularly close to her mother. Following the death of her father in 1771 the two women shared both a home and a household. Sofia Albertina took her mother’s side within the tense family disputes that arose within the royal family, particularly against King Gustav III and Carl. The first major family fight developed before the birth of the Crown Prince (later King Gustav IV) in 1778, when Lovisa Ulrika encouraged the rumour that King Gustav III was not the father of Sofia Magdalena’s imminently-expected child. The family only just became reunited at Lovisa Ulrika’s deathbed five years later. The family rift led Sofia Albertina to write an unpublished piece entitled “Mémoires de ma vie” (whose contents related to the period 1782–1792), which established a defence of her mother and served as a heated attack on her brother King Gustav III. This is the only surviving literary manuscript written by the princess herself.

It is not clear whether the fact that Sofia Albertina never married was down to a conscious decision she had taken or whether it was just a result of circumstance. That her older siblings married whilst the younger did not was a pattern which was continued by the Gustavian royal families and stemmed from earlier German princely traditions. A contributing factor was certainly that Sofia Albertina stood to inherit the Protestant abbey of Quedlinburg, which would safeguard her future income after her maternal aunt Anna Amalia died and this thus made marriage less of a necessity to her.

As an unmarried member of the royal family Sofia Albertina was financially dependent on the regent who would award her – out of the public purse – a quarterly float to cover her household expenses. Following the death of her mother in 1782 Sofia Albertina gained her own household with noble attendants. She had the use of the current Bååt palace on Blasieholmen during the extensive and expensive refurbishment of her own home, the so-called Arvfursten palace, which was completed during the 1790s. After the death of her brother, Fredrik Adolf, in 1803 she was given the use of his landed estate of Tullgarn, which became her beloved summer residence and through the farming of which she was able to generate a certain amount of income.

Sofia Albertina was politically aware and had informed positions on various issues. She seems to have rarely kept these opinions to herself. She was continually enriched by a stream of European news from her extensive subscriptions to various newspapers and correspondents. Sofia Albertina was, just like her mother, well-educated and over time became a well-travelled woman. She owned a magnificent library comprising about 5,000 volumes which she had inherited from her mother and which she expanded throughout her life. In a fashion which was typical of her day, this book collection was dominated by French-language literature and French translations. The books reflect her particular interests in contemporary history, the French Revolution, and the life stories of the counter-revolutionaries.

In 1787 Sofia Albertina travelled to Germany in order to take ownership of the abbey of Quedlinburg in her role as abbess. The abbey had been run by unmarried women from German princely families since the medieval period. Until 1803, when the abbey was secularised by Prussia following Napoleon’s victories, Sofia Albertina ruled over her own little kingdom which generated taxes for her. Her appointment as abbess was important to her prestige and her reception within the Swedish court and her German relatives. Sofia Albertina spent the periods of 1787–1788, 1792–1794, and 1799–1803 abroad, primarily at Quedlinburg, from which she made visits to other German cities as well as an extended visit to Italy in the winter of 1792–1793. She served as an important link for Swedish travellers and for German-Swedish diplomatic contacts. When Sofia Albertina visited Berlin in 1787 she was entrusted by King Gustav III with instigating discussion with the king of Prussia about an alliance with Sweden, albeit the latter rejected the idea.

From the 1770s right through to the 1810s Sofia Albertina and her friend, and sister-in-law, Duchess Hedvig Elisabeth Charlotta formed the advance-guard of the Swedish court’s social life whilst also serving as each other’s stalwart supports. In the wake of King Gustav III’s war against Russia – and against the Swedish parliament in 1789 when the king sought to strengthen his position at the expense of the nobility – these two princesses spearheaded a faction working against him. They undermined the king’s position by planning coups (albeit they never came to fruition), by ostracising the king and his friends, and by neglecting their royal representative duties. Their behaviour encouraged political opposition and contributed, although in an indirect manner, to the murder which occurred in 1792.

Because Sofia Albertina was a woman she could not assume any formal political role above and beyond her representative duties. She was, however, able to exploit her position as princess in order to serve as patron and protector of specific individuals and families. She wooed key figures at the court by letter and personal visits, whilst also disseminating information as well as pamphlets on controversial subjects. In 1794 she took her former lady-in-waiting Magdalena Rudenschöld into protective custody when her brother Duke Carl and Gustaf Adolf Reuterholm had passed a death sentence on her in response to her political machinations. She petitioned for Rudenschöld’s pardon and successfully obtained a reduction in her sentence.

When it came to the Swedish revolution of 1809 Sofia Albertina defended the old regime against the autocratic reforms brought in by a more liberal political faction. Sofia Albertina and Hedvig Elisabeth Charlotte particularly came out in defence of Queen Fredrika and protected her after King Gustaf IV Adolf was usurped and the royal family was forced into exile. The royal sisters-in-law, just like Duke Carl, sought to uphold the Gustavian dynasty by having Crown Prince Gustaf, the deposed king’s son, adopted by the duke/the regent couple. They took it as a personal insult and rejecting of their political values when one of Napoleon’s inner circle, Marshal Jean Baptiste Bernadotte, was elected as Sweden’s Crown Prince in 1810 bearing the name of Karl Johan. They feared the military success of the French republic and were personally impacted by the suffering and unrest Napoleon had fomented amongst the European courts and their royal relatives.

It is difficult to determine how the Gustavian royal family subsequently manoeuvred in opposition to the new dynasty. Around this turbulent period within Swedish politics – from King Gustav IV Adolf’s fall from favour around 1805 until Karl Johan’s political consolidation as Sweden’s Crown Prince in 1814 – the flow of correspondence ceased. The absence of letters increases the likelihood that they were critical of developments and that they sought to hide the evidence from their opponents. This would be a logical approach given the background of Crown Prince Karl Johan’s imposition of political oppression. In December 1812 he decreed a ban on any associating with the former Gustavian royal family, to whom Sofia Albertina and Hedvig Elisabeth Charlotte had hitherto been close. Karl Johan sought to obliterate the memory of King Gustaf IV Adolf, in a so-called damnatio memoriae by which artwork and inscriptions from his period in power were destroyed. This decree was not removed until King Oscar I acceded to the throne in 1844. Following the death of Sofia Albertina hidden memorials to and public art which dated from the time of King Gustaf IV Adolf were found in a box-room in the Arvfursten palace. These items provide interesting evidence of her political sympathies and her silent opposition which she maintained until death, regardless of her alleged acceptance of the new order.

The surviving correspondence of Sofia Albertina and Hedvig Elisabeth Charlotte which dates from the 1810s testifies to their personal admiration of Karl Johan and attempts at currying his favour. They extol his political decisions and discuss the best way to catch his attention on a visit to Sofia Albertina at Tullgarn. The princess, who ended up being the last surviving member of the Gustavian royal family, thus became an important link between the old and the new dynasty and a legitimiser of Karl Johan’s position. During her final years of life she intermittently – and to very favourable reception – appeared at royal ceremonies and she willed a significant amount of her belongings to King Oscar I and his family.

If you look at the external aspects of Sofia Albertina’s life she appears to be an independent and privileged princess who exuded a lot of self-confidence and had a broad scope within which she could operate. Her contemporaries, such as Hedvig Elisabeth Charlotte and Hans Axel von Fersen who were both part of her inner circle, tended to express themselves in deprecatory manner in relation to her intellect and her personality. Princess Sofia Albertina’s powerful sense of humour, sometimes faltering judgement, and lack of beauty is often mentioned by those who knew her. The impression she left on posterity has presumably also been coloured by the much vaunted blind faith she expressed in the well-known affair of Lolotte Forsberg, a chambermaid. Sofia Albertina had allowed herself to be persuaded in the 1790s that the former was her sister and thus helped her move upwards in society by giving her appointments at court, financially supporting her, and by arranging a noble marriage to Count Gustaf Stenbock. Some evidence of Sofia Albertina’s lacks in the intellectual department can be found in her own letters and manuscripts, mainly composed using an awkward and impenetrably formulaic form of French – in great contrast to many other of her similarly positioned female contemporaries.

Sofia Albertina died in Stockholm in 1829. She is buried at the Riddarholmen church. 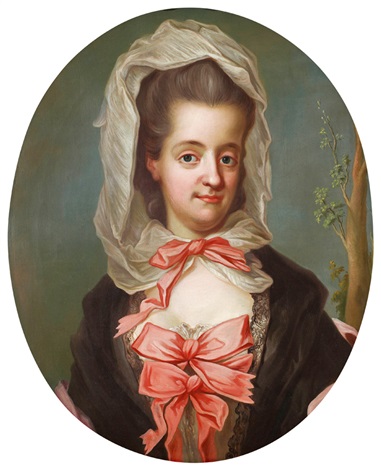